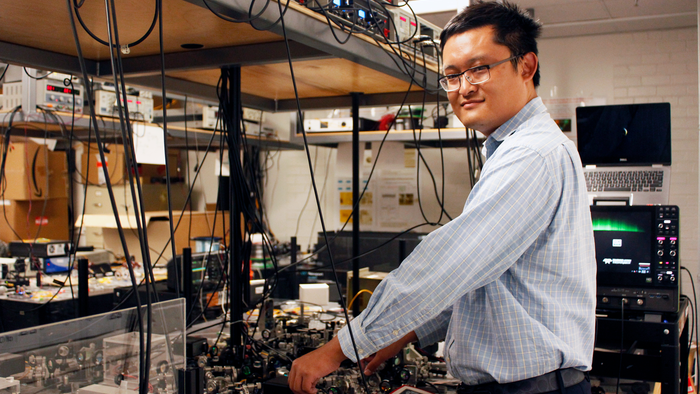 Zheshen Zhang, a University of Arizona assistant professor of materials science and engineering, is leading a $5 million quantum technology project to advance navigation for autonomous vehicles and spacecraft, as well as measurement of otherworldly materials such as dark matter and gravitational waves.

In September 2020, 29 U.S. teams received phase I funding to develop solutions in either quantum technology or artificial intelligence-driven data sharing and modeling. Ten prototypes have advanced to phase II, each receiving $5 million, including two projects led by UArizona researchers – Zhang's project and another by hydrology and atmospheric sciences assistant professor Laura Condon.

"Quantum technology and AI innovation are a priority for the National Science Foundation," said Douglas Maughan, head of the NSF Convergence Accelerator program. "Today's scientific priorities and national-scale societal challenges cannot be solved by a single discipline. Instead, the merging of new ideas, techniques and approaches, plus the Convergence Accelerator's innovation curriculum, enables teams to speed their research into application. We are excited to welcome Quantum Sensors into phase II and to assist them in applying our program fundamentals to ensure their solution provides a positive impact on society at large."

The objects we interact with in our daily lives adhere to classic laws of physics, like gravity and thermodynamics. Quantum physics, however, has different rules, and objects in quantum states can exhibit strange but useful properties. For example, when two particles are linked by quantum entanglement, anything that happens to one particle affects the other, no matter how far apart they are. This means probes in two locations can share information, allowing for more precise measurements. Or, while "classical" light emits photons at random intervals, scientists can induce a quantum state called "squeezed" light to make photon emission more regular and reduce uncertainty – or "noise" – in measurements.

The Quantum Sensors project will take advantage of quantum states to create ultrasensitive gyroscopes, accelerometers and other sensors. Gyroscopes are used in navigation of aircraft and other vehicles to maintain balance as orientation shifts. In tandem, accelerometers measure vibration or acceleration of motion. These navigation-grade gyroscopes and accelerometers are light-based and can be extremely precise, but they are bulky and expensive.

Rather than combat these quantum limitations with classical resources, Zhang and his team are fighting fire with fire, so to speak, by using quantum resources. For example, the stability of squeezed light can counterbalance the uncertainty of quantum fluctuations, which are temporary changes in variables such as position and momentum.

"The fundamental quantum limit is induced by quantum fluctuations, but this limit can be broken using a quantum state of light, like entangled photons or squeezed light, for the laser itself," said Zhang, director of the university's Quantum Information and Materials Group. "With this method, we can arrive at much better measurements."

Gaining an edge on Earth and beyond

The benefits of extremely precise measurements are numerous. If a self-driving car could determine its exact location and speed using only a compact, quantum-enhanced, onboard gyroscope and accelerometer, it wouldn't need to rely on GPS to navigate. A self-contained navigation system would protect the car from hackers and provide more stability. The same goes for navigation of spacecraft and terrestrial vehicles sent to other planets.

"In both space-based and terrestrial technologies, there are a lot of fluctuations. In an urban environment, you might lose GPS signal driving through a tunnel," Zhang said. "This method could capture information not provided by a GPS. GPS tells you where you are, but it doesn’t tell you your altitude, the direction your vehicle is driving or the angle of the road. With all of this information, the safety of the passengers would be ensured."

"We are excited to work with the University of Arizona on this NSF Convergence Accelerator project," said Jianfeng Wu, Honeywell representative and project co-principal investigator. "The integrated entangled light sources can reduce the noise floor and enable the navigation-grade performance from chip-scale gyroscopes. The success of this program will significantly disrupt the current gyroscope landscape from many perspectives."

Because precise navigation would directly affect 700 million people worldwide, researchers estimate that quantum sensors could create a $2.5 billion market by 2035. They also expect that the precision and stability offered by the technology will give researchers a way to measure previously unmeasurable forces, such as gravitational waves and dark matter.

"As a leading international research university bringing the Fourth Industrial Revolution to life, we are deeply committed to advance amazing new information technologies like quantum networking to benefit humankind,” said University of Arizona President Robert C. Robbins. "The University of Arizona is an internationally recognized leader in this area, and I look forward to seeing how Dr. Zhang's Quantum Sensors project moves us forward in addressing real-world challenges with quantum technology."