To ensure the reliable operation of rolling bearings, correct lubrication is a vital, and in practice all too often overlooked, factor. 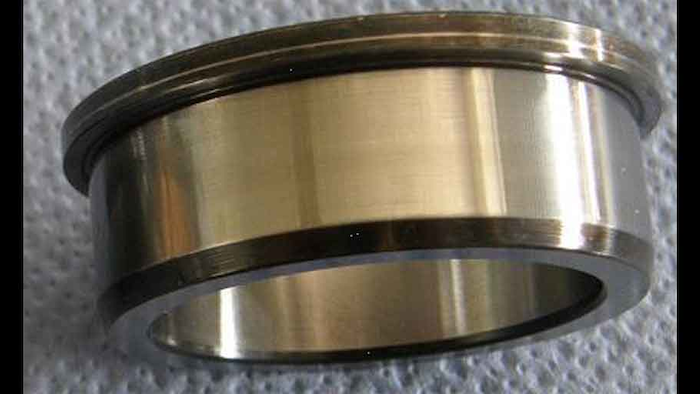 To ensure the reliable operation of rolling bearings, correct lubrication is a vital, and in practice all too often overlooked, factor. The main purpose of a lubricant is to separate the metal surfaces of the bearing’s components with a thin lubricating film to prevent wear. At the same time, the lubricating film reduces friction and therefore power dissipation, resulting in reduced energy consumption of the whole system.

Lubrication is a critical element of the entire bearing system and must be carefully considered. About 40 percent of all premature bearing failures are caused by lubrication problems. The reasons for this are varied and start with mistakes occurring during the installation of the bearings as well as incorrect maintenance, such as failure to relubricate on time. Some problems can be traced back as far as the design stage of an application, with too little attention being paid to the bearing arrangement and lubrication system, because the type of bearing used generally affects the lubrication requirements. Further criteria for selecting the proper lubricant are bearing load, the operating temperature, the ambient temperature of the bearings, the bearing speed range and possible contamination of the bearings. In addition to technical factors, the costs of both lubricant and complete lubrication system must be considered.

Using three application examples, the effect of lubrication on the function of bearings is illustrated in the following. 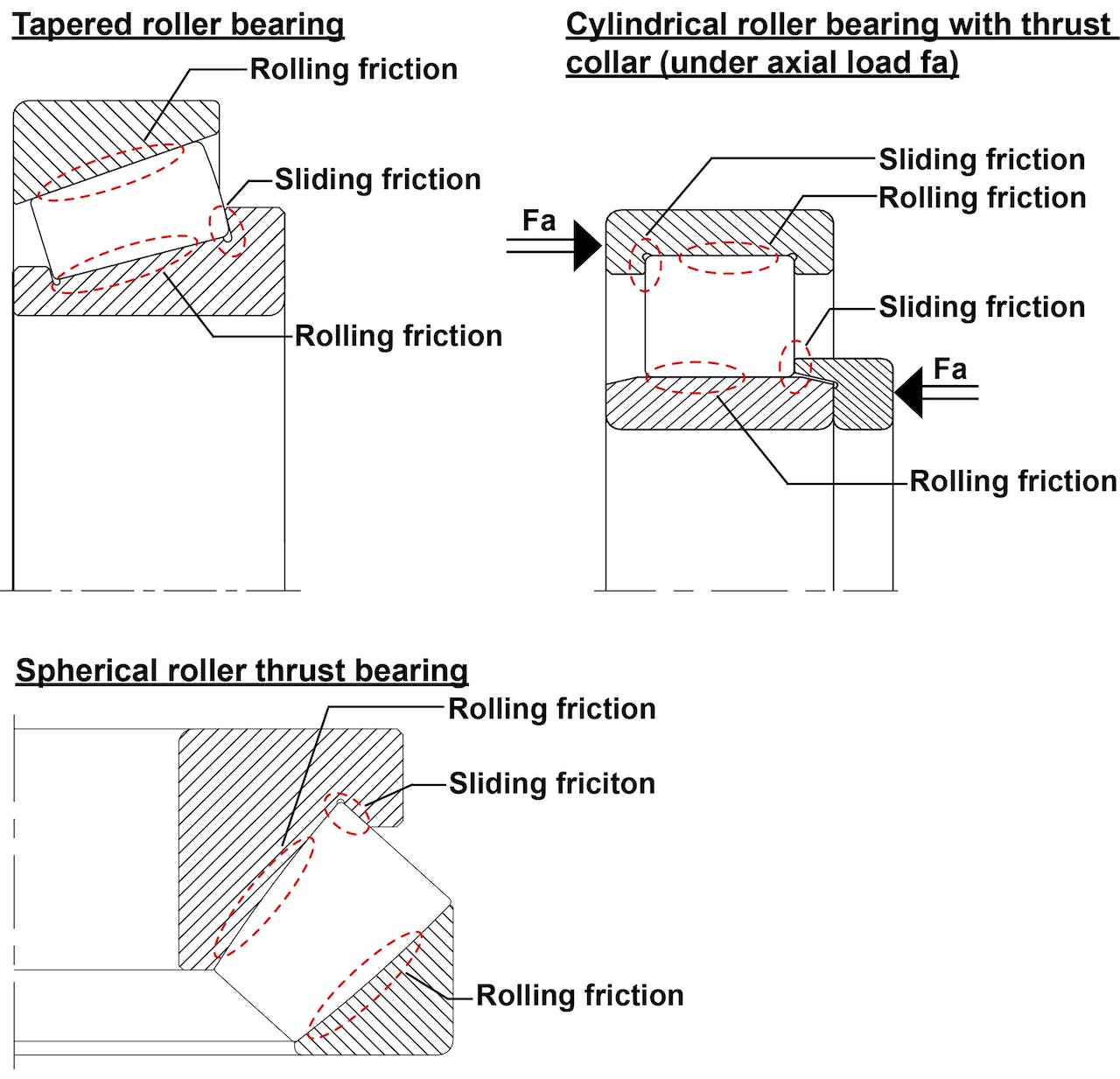 As part of a theoretical consideration of the bearings in a power take-off (PTO) gearbox, the lubrication was investigated more closely. It was found that, under the given operating conditions, the lubricant’s viscosity was much too low to form a sufficiently effective lubricant film. Increased wear and a reduced service life would have been the logical consequence. NKE therefore recommended the use of a more viscous, i.e. thicker lubricating oil.

To be on the safe side, a practical test was performed, in which two identical gearboxes were filled with the lubricating oils to be compared and run for a period of 500 hours. In the subsequent survey, discolorations and initial signs of wear were clearly visible on the functional surfaces of the bearing run with the thinner oil (Figure 2). The bearings operated with the thicker oil did not show any signs of wear (Figure 3).

The customer’s fear that the thicker oil would result in higher power dissipation proved unfounded. On the contrary: the gearbox with the more viscous oil exhibited lower losses and therefore also a reduced operating temperature. This can be attributed to the better separation of the metallic surfaces in operation, which more than compensates the slightly higher fluid friction. 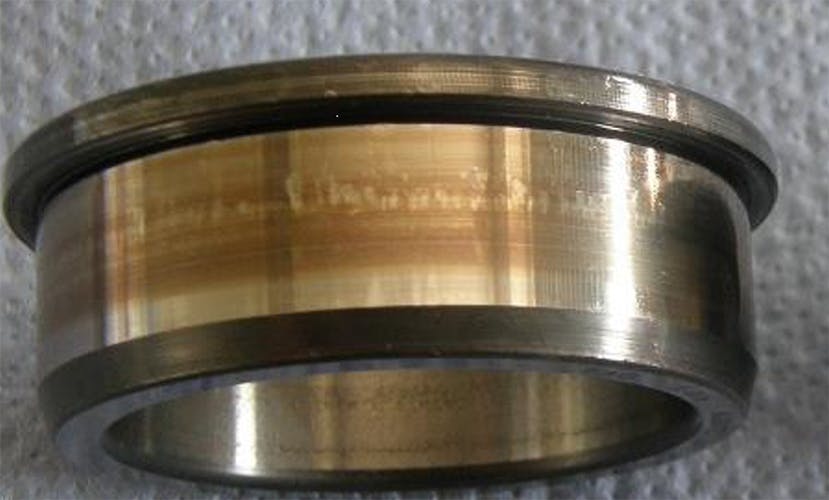 During test operation of a large cooling water pump — a concrete volute pump, i.e. a centrifugal pump with vertical shaft in a cast concrete housing (Figure 4) — the axial bearing at the drive end repeatedly exceeded its permissible operating temperature, resulting in an automatic shutdown. On closer inspection, the use of an unsuitable lubricant for this application was identified as the culprit. The oil in question was a pure hydraulic oil, which did not in any way meet the bearing’s requirements in terms of either composition, i.e. additives, or viscosity.

The high measured operating temperature was the direct result of the metallic contact and resulting friction especially between the side faces of the rolling elements and the guide lips of the shaft locating washers (see spherical roller thrust bearing in Figure 1). This resulted in irreversible damage to the bearings’ functional areas within just a short time, in effect preventing reliable long-term operation. The bearings had to be replaced at considerable expense on site.

By changing to a suitably viscous oil selected for the application parameters and the use with spherical roller thrust bearings, a reliable separation of the contact surfaces and a low operating temperature were achieved. The plant has now been in fault-free operation since 2009. 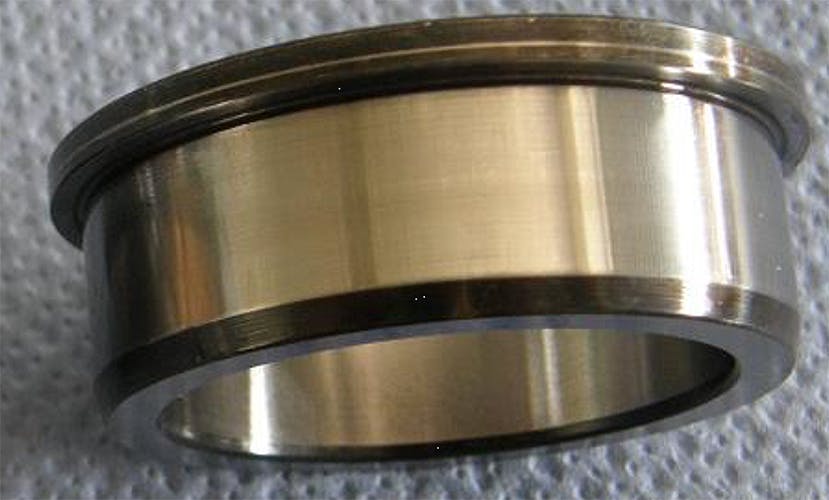 The screw pump in this example delivers fuel — both heavy and light oil — to marine diesel engines. To allow the oil to be more readily pumped and injected into the combustion chamber, it is first heated up. Consequently, the screw bearings are also exposed to the high temperature of the fuel oil.

To be able to realise the simple bearing concept required by the customer, i.e. a deep groove ball bearing with integrated seals, a theoretical analysis of the setup was conducted. At the bearing temperature of plus 150°C initially estimated by the customer, a satisfactory solution was out of the question. The lubricant’s service life calculated based on this operating temperature and the associated life of the bearing fell clearly short of the required values.

Following further consultations with the client, a temperature measurement was carried out on a test setup to determine the actual operating conditions. The result was a maximum bearing temperature of “only” plus 130°C. With the selection of a lubricating grease that was suitable for this temperature range in cooperation with a renowned lubricant manufacturer and, by maximising the amount of grease in the bearing, the specified service life could then be achieved. 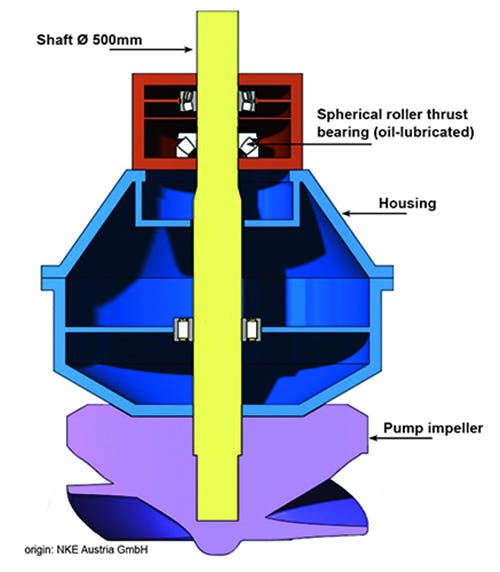 As can be seen from the above examples, the operational reliability and durability of bearings can be significantly improved by correctly assessing and adjusting the lubrication. This also helps to reduce initial costs and avoids costs associated with premature bearing failures. As a general rule, the sooner the issue of lubrication is addressed, the easier and more cost effectively potential problems can be dealt with or avoided.