A failure of the fastener between the railroad tie and the line was likely the problem, but more investigation will be required before railroad officials know for sure, an official with Union Pacific said Sunday. 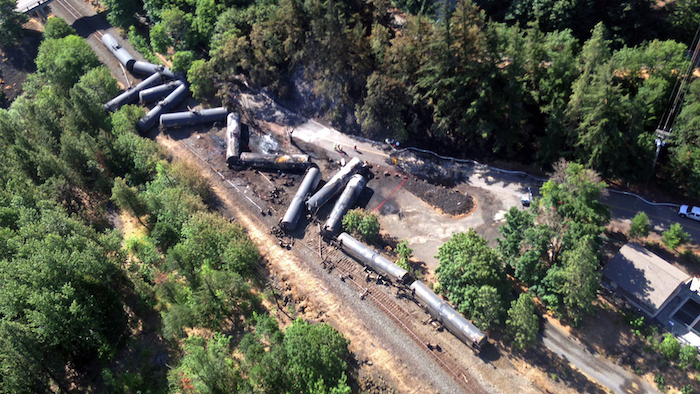 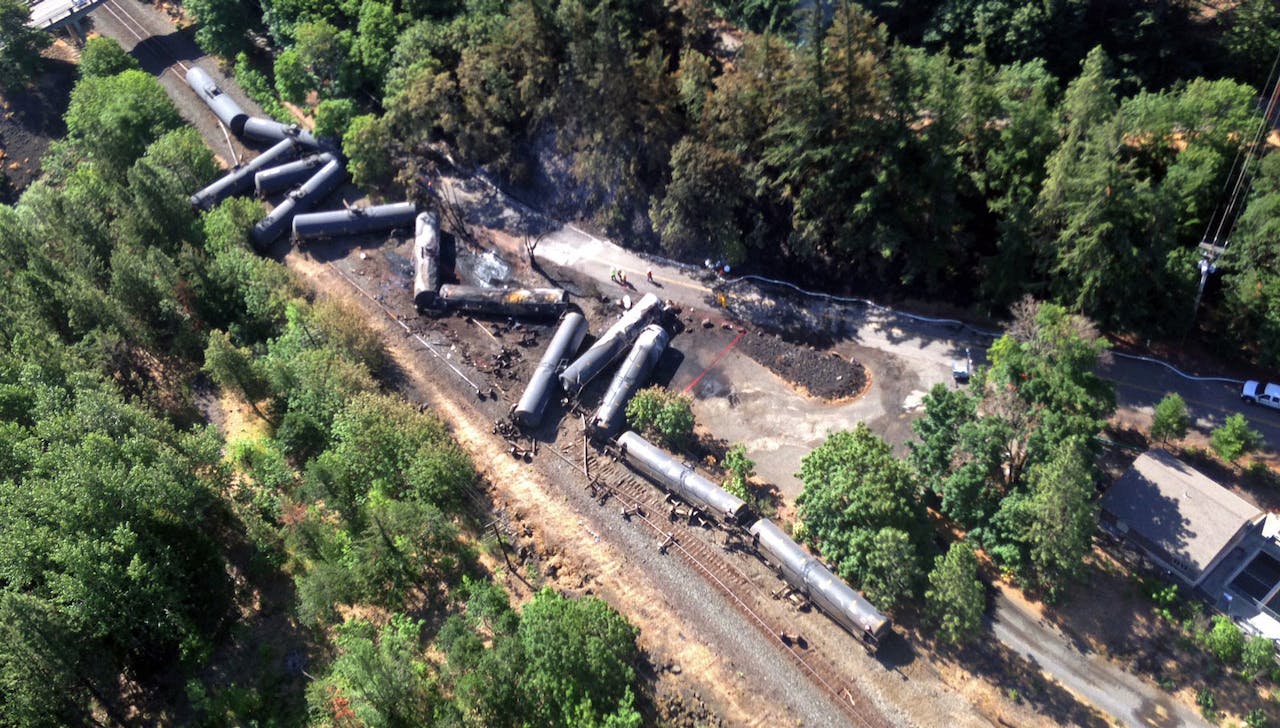 This aerial view provided by the Washington State Department of Ecology shows scattered and burned oil tank cars, Saturday, June 4, 2016, after the train derailed and burned near Mosier, Ore., Friday. Union Pacific Railroad says it had recently inspected the section of track near Mosier, about 70 miles east of Portland, and had been inspected at least six times since March 21. (Washington Department of Ecology via AP)

SEATTLE (AP) — Track failure was likely the cause of the oil train derailment in Oregon, an official with Union Pacific Railroad said Sunday.

A failure of the fastener between the railroad tie and the line was likely the problem, but more investigation will be required before railroad officials know for sure, Raquel Espinoza said Sunday.

Union Pacific inspects the tracks that run through Mosier, Oregon, twice a week, and the most recent inspection took place on May 31, Espinoza said. Union Pacific had completed a more detailed and technical inspection of this section of track at the end of April and found no problems.

The railroad is focused on removing the crude oil from the damaged cars as safely and quickly as possible, Espinoza said. Its priority is to bring people home safe to Mosier, where 16 of 96 tank cars train derailed Friday and started a fire in four of the cars.

"We're doing everything we can to get you back home, but we're not going to risk your safety," Espinoza said at a news conference. When asked if she knew how much the cleanup was going to cost the company, Espinoza said, "I don't know and it doesn't matter."

"Our priority here is bringing people home. Nothing else matters," she added. Repairs to a water treatment system, which runs under the tracks, would need to be completed before people could return to their homes, the railroad said.

About a hundred people — a quarter of the town's population — have been evacuated from their homes since Friday in an area about a quarter mile around the train.

Mosier's mayor and fire chief said Sunday the derailment and fire in their town could have been a lot worse.

Fire Chief Jim Appleton says the usual amount of wind in Mosier — about 25 mph — could have turned this incident into a major disaster, destroying the town and sending flames across state lines.

"My attention was focused on the incident that didn't happen," Appleton said. "It probably would have burned its way close to Omaha, Nebraska. That's how big it would have been."

"I count myself lucky that we dodged a bullet," Burns said, after noting that her own child was at school within a few blocks of the derailment. "We hope that this is a wake-up call."

The Mosier waste water treatment plant and sewer system were not operational Sunday. Residents were told not to flush their toilets and advised to boil any water before they drank it or cooked with it. Mosier exhausted its water reserves fighting the fire and cooling the trains. Burns said the aquifers were completely depleted.

Officials have been conducting continuous water and air monitoring since plumes of black smoke filled the sky near the scenic Columbia River Gorge.

"Today's priority is focused on safely restoring essential services to the community of Mosier as soon as possible," incident spokeswoman Judy Smith of the U.S. Environmental Protection Agency said in a statement.

Authorities were working to clean up an oil sheen in the Columbia River near the scene of the derailment, while the oil inside the remaining tank cars was being moved to trucks.

No injuries have been reported. But Oregon health officials are asking people with questions or concerns to call a hotline to talk to a health expert at 888-623-3120.

Including Friday's incident, at least 26 oil trains have been involved in major fires or derailments during the past decade in the U.S. and Canada, according to an Associated Press analysis of accident records from the two countries. The worst was a 2013 derailment that killed 47 people in Lac-Megantic, Quebec. Damage from that accident has been estimated at $1.2 billion or higher.

The Tools You Need to Get Started with E-Commerce

We've all heard horror stories of e-commerce strategies gone awry, with thousands of dollars spent with nothing to show for it. This new video roundtable gives you the tools you need to get started and be successful with e-commerce. Watch now.
Nov 30th, 2021