A commonly observed phenomenon seen by electricians after installing a variable frequency drive (VFD) is a measurable current imbalance on the input to the VFD when operated under lightly loaded conditions. In across the line (ACL) starters, in which a three-phase induction motor is run at full speed and voltage, this can be an indication of a serious problem that needs further diagnosis. However, with the application of a VFD that provides variable speed in response to variable loads, the two systems are really as similar as apples and oranges. In fact, the imbalance at the input of the inverter under lightly loaded conditions is a normal phenomenon of the electrical circuit.

This issue is due to the connection of the electrical supply to the VFD, not to the motor itself. The issue is the full bridge rectifier of the VFD. The common VFD rectifier section is composed of six diodes, which are semiconductors designed to conduct current in one direction, acting like a check valve in water supply systems. A check valve will only allow fluid to flow when the pressure on the supply side is greater than the pressure on the discharge side. A diode works similarly but the pressure is represented by the electromotive force or voltage. Diodes have many uses in various types of electronic circuits and in the case of a bridge rectifier the purpose is to convert AC current to DC current. The DC current is then connected to a circuit of specialized transistors called insulated gate bipolar transistors (IGBT) with the motor coil connected between them. A transistor is simply a semiconductor switch that can be turned on and off at high speeds, typically 2 to 15 kilohertz. It is the IGBT’s that directly control the voltage and frequency sent to the motor coil. The diode bridge at the beginning effectively severs the connection of the line supply from the motor. (See Figure A)

It is this disconnection from the line to the motor by the bridge rectifier that makes the comparisons to ACL operations irrelevant in comparison with VFD operations. A current imbalance on ACL motors is commonly caused by a voltage imbalance phase to phase on the line supply and should be maintained to NEMA limits of 1 percent (NEMA MG1, 12.45). If not, motor performance will suffer and damage to the motor coil can occur. Since the VFD severs the direct connection of the line supply to the motor, it acts as a buffer and actually protects the motor from a phase to phase voltage imbalance. A VFD can even operate a three-phase motor on a single phase line. This (phase conversion) is a common application for VFD’s in areas where single phase current is all that is available. Sizing VFD’s for actual single phase input should be done following the VFD manufacturers guidelines to ensure that the VFD can supply rated power to the motor without excessive loading to VFD components. Our discussion here concerns lightly loaded VFD’s on three-phase power with small voltage imbalances (1 to 3 percent). Voltage imbalances on the electrical grid are common in most areas and if outside of NEMA specifications, they should be corrected.

This can be useful if there is additional impedance in front of the VFD in the form of a line reactor, isolation transformer or a phase shifting transformer. This process can be moved to the line side of each device to isolate the imbalance if desired.

Since varying the speed of fans and pumps that follow the laws of affinity is an efficient method to regulate flow and reduce power consumption, light loading becomes a likely operational condition. In this condition, even voltage imbalances within NEMA specifications can cause unbalanced current draw phase-to-phase with the highest line voltage supplying most of the current. This is due to the design of a rectifier that passes current like a check valve and the fact that the supply power is alternating from positive to negative (AC) voltage. Since voltage is a measure of electromotive force, the diode will only conduct when the line supply voltage is greater than the DC bus voltage on the other side of the diode. This means that the diodes will only conduct current at the peaks (positive or negative) of the voltage waveform and is why the DC bus voltage will be measured at these peaks.

When we measure the AC line supply voltage with common multi-meters at a fixed value, what is actually displayed on the meter is a voltage expressed in units of root mean squared (RMS) voltage. Since the voltage measured is alternating from positive to negative, the average value would be zero. The RMS value is the area contained in the sine wave between zero and the peak. This is a measure used to represent the amount of the electromotive force supplied by the AC line. This means that the peak of the voltage waveform will be the RMS value times the square root of 2 (1.41), so that 460 volts RMS x 1.41 = 648.6 volts peak. If you measure the DC bus voltage of a VFD supplied with 460 volts AC, you will measure 648 volts DC. As the motor is loaded down, the DC bus voltage will naturally drop. Any diode in which the supply voltage is greater than the reduced DC bus voltage, will turn on and replenish the DC bus. Since the three phases of the line supply are offset by 120 electrical degrees, only one pair of diodes (one positive, one negative) out of the six will be conducting at any time. Once the line voltage drops below the DC bus voltage, the diodes will turn off, resulting in a pulse of current being let through to the DC bus circuit. This is why this type of bridge is also called a 6 pulse bridge and why it is characterized as drawing power in a non-linear manner, which means that the current waveform does not match the voltage waveform. (See Figure B)

Current is only conducted to the DC bus when there is a voltage difference between the DC bus and the line supply. So when the VFD is lightly loaded and one of the supply lines has a higher line voltage, it will resupply the DC bus first and conduct longer than the other phases. Once the DC bus is pulled down further by the motor load, the other diodes will begin to turn on. But the imbalance in current will remain, depending on the level of voltage imbalance phase to phase. A current imbalance on the input of the VFD is normal with any level of voltage imbalance and will be greatest under lightly loaded condition. This should not represent an excessive load to VFD input components on a three-phase supply.

This article originally appeared in the November/December IMPO print edition.

The move sets the stage for the largest dam demolition project in U.S. history.
Mar 3rd, 2022 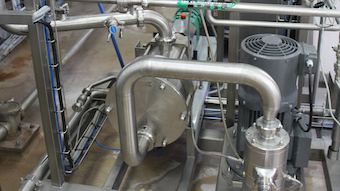 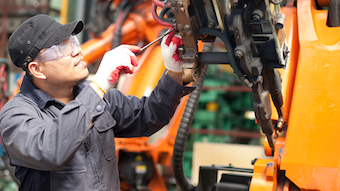