"They got a new sheriff in town,” Biden said after touring a Pennsylvania Mack Truck facility. 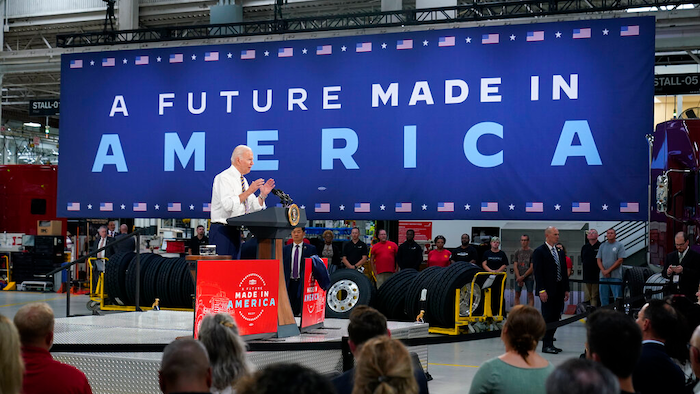 MACUNGIE, Pa. (AP) — President Joe Biden checked out the big rigs at a Pennsylvania truck factory on Wednesday and promised workers that his policies would reshape the U.S economy for the working class — a message clearly aimed at a group of voters who have drifted to Republicans.

Biden highlighted new “buy American” rules from his administration that he said would put a new muscle behind an initiative that he argued had become a “hollow promise” in recent years.

"They got a new sheriff in town,” Biden said after touring Mack Truck's Lehigh Valley operations facility. He said the effort would help create jobs, a central thrust of his administration's “build back better” program.

Administration officials, who have made manufacturing jobs a priority, believe Democrats’ political prospects next year might hinge on whether Biden succeeds in reinvigorating a sector that has steadily lost jobs for more than four decades.

Presidents Bill Clinton, George W. Bush, Barack Obama and Donald Trump each said his policies would save manufacturing jobs, yet none of them broke the long-term trend in a lasting way.

The administration is championing a $973 billion infrastructure package, $52 billion for computer chip production, sweeping investments in clean energy and the use of government procurement contracts to create factory jobs.

On the visit, Biden heard about Mack's electric garbage trucks.

The plant was neatly organized, with the thousands of truck parts organized in aisles and the hulls of half-finished trucks awaiting the president's inspection. The plant was silent other than the whir of fans. Work was halted as part of a two-week hiatus during which Biden visited. 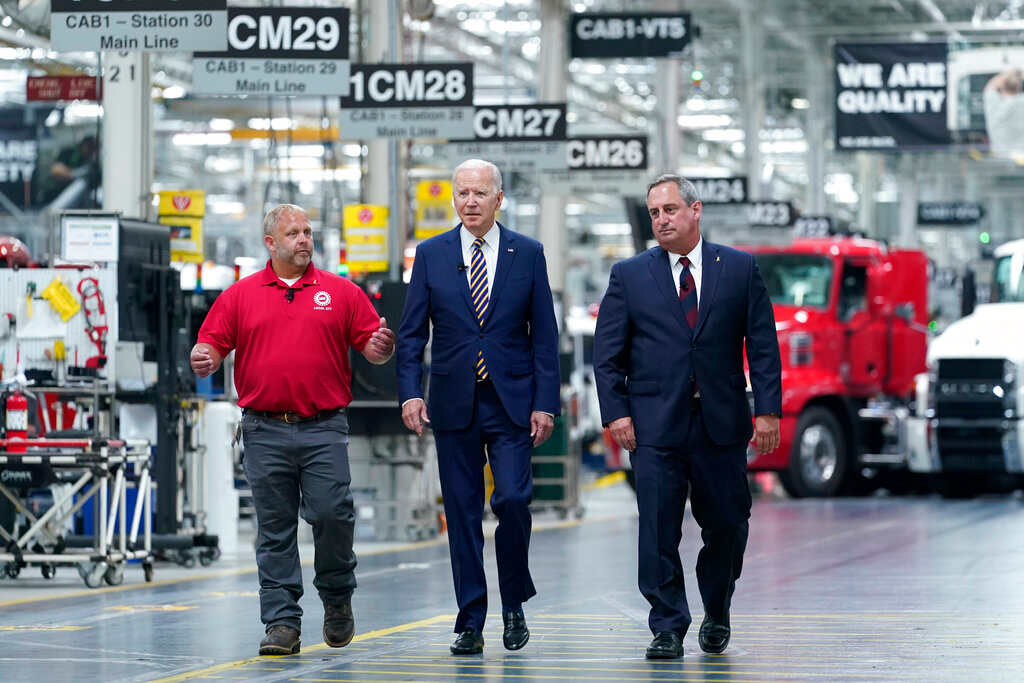 The president won Lehigh County in the 2020 election, but he is facing the perpetual challenge of past administrations to revive a manufacturing sector at the heart of American identity. Failure to bring back manufacturing jobs could further hurt already ailing factory towns across the country and possibly imperil Democrats' chances in the 2022 midterm elections.

Sen. Pat Toomey, R-Pa., said Biden should siphon off unspent money from his $1.9 trillion coronavirus relief package to cover the investments in infrastructure, instead of relying on tax increases and other revenue-raisers to do so.

“Hopefully, he will use his visit to learn about the real, physical infrastructure needs of Pennsylvanians — and the huge sums of unused ‘COVID’ funds which should pay for that infrastructure,” Toomey said in a statement.

Layoffs of white factory workers led communities to vote for Republican challengers and turn against Democratic incumbents, according to a 2021 research paper by McGill University’s Leonardo Baccini and Georgetown University’s Stephen Weymouth. They found a connection between deindustrialization and greater racial division as white voters interpreted the layoffs as a loss of social status.

Areas with more factory layoffs also became more pessimistic about the entire economy. The trends documented in the research were most pronounced in 2016, when Donald Trump won the White House while emphasizing blue-collar identity and racial differences.

One challenge for Democrats is that they’re not being forced to deal with the most recent manufacturing job losses, but layoffs that began decades ago.

“Biden would benefit from an improved manufacturing jobs outlook,” Weymouth said. “But a lot of economists think that many of these jobs are gone for good. And so, it’s an uphill battle. There’s alternatives: The president can pursue a more substantial social safety net for people who lose their jobs or investments in these communities that declined for decades.”

The Biden administration is trying to help domestic manufacturers by proposing to increase the amount of American-made goods being purchased by the federal government.

The administration is proposing that any products bought by the government must have 60% of the value of their component parts manufactured in the United States. The proposal would gradually increase that figure to 75% by 2029, significantly higher than the 55% threshold under current law.

Manufacturing has improved since the depths of more than a year ago during the coronavirus pandemic-induced recession. Labor Department data show that factories have regained about two-thirds of the 1.4 million manufacturing jobs lost because of the outbreak. Factory output as tracked by the Federal Reserve is just below its pre-pandemic levels.

But the manufacturing sector — especially autos — is facing serious challenges.

Automakers are limited by a global shortage of computer chips. Without the chips that are needed for a modern vehicle, the production of cars and trucks has dropped from an annual pace of 10.79 million at the end of last year to 8.91 million in June, a decline of nearly 18% as measured by the Fed. Analysts at IHS Market estimate that the supply of semiconductors will only stabilize and recover in the second half of 2022, right as the midterm races become more intense.

For the past several decades, presidents have pledged to bring back factory jobs without much success. Manufacturing employment peaked in 1979 at nearly 19.6 million jobs, only to slide downward with steep declines after the 2001 recession and the 2007-09 Great Recession. The figure now stands at 12.3 million.