Customers cannot even get ahold of the company. 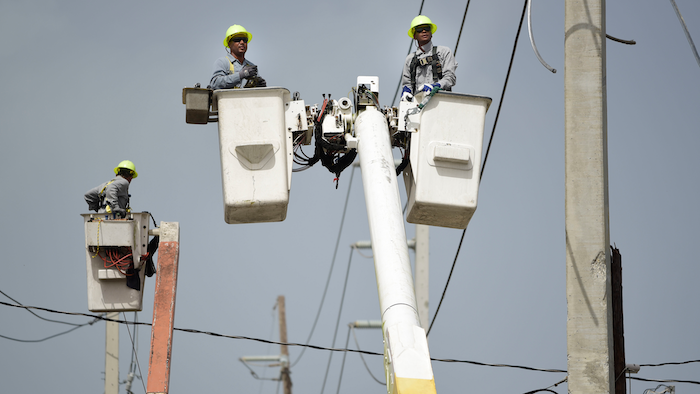 SAN JUAN, Puerto Rico (AP) — A private company that took over power transmission and distribution in Puerto Rico this month has struggled with widespread outages and growing anger as it scrambled to control a fire that left hundreds of thousands of clients in the dark.

Officials say outages had affected more than 1 million customers so far this month, not counting those affected by the explosion and fire at a main substation in the capital of San Juan. Several mayors had declared an emergency as they distributed ice and generators to those most in need before Thursday's fire, whose cause was under investigation as officials warned it would take all night to restore power after a transformer blew.

Around 700,000 clients were without power at the height of the outage, and at least 400,000 remained without electricity late Thursday.

Many in Puerto Rico had hoped for a quick improvement in service, but clients complain it has gotten even worse in Luma’s first few days of operations – with problems complicated by heavy rains this week followed by the explosion.

“This has turned into chaos,” said Javier Jiménez, mayor of the western town of San Sebastián, which had established its own brigade of workers to make repairs after Hurricane Maria largely destroyed the U.S. territory’s electrical grid in 2017, leaving some people without electricity for nearly a year.

Jiménez said he was forced to activate that brigade once again this week because Luma Energy, which took over the transmission and distribution system of Puerto Rico’s Electric Power Authority on June 1, told him it did not have enough manpower to restore electricity to the more than 1,000 families left in the dark over the weekend in his town.

“I could not believe it,” he said. “A company that has been here just days...”

Jiménez also noted that Puerto Ricans have complained that when they call the company, they are placed on hold for hours with no response.

A Luma spokeswoman did not return a message for comment, while a company representative, José Pérez, told local radio stations that the outages could be acts of sabotage or instances of too many people using the system at one time. Then on Thursday afternoon, Luma reported that its website became the target of a cyberattack, saying that the 2 million hits per second it was receiving was preventing customers from accessing the site.

Government officials have urged patience, noting that Luma inherited thousands of outages and only just took over a system running on rickety infrastructure, much of it patched together after Hurricane Maria.

In early June, Luma CEO Wayne Stensby told reporters that the company had more than 350 line workers and that the number was sufficient.

On Tuesday, Luma issued a statement urging municipal officials and private contractors to stop trying to fix the system independently, saying that such efforts were illegal and dangerous.

“Luma is aware of the outages affecting communities across Puerto Rico and working safely and strategically to restore power across the island,” it said.

But many customers are seething, including José Aquino, a 38-year-old gymnastics instructor who said he and his family have been without power for 14 hours at a time on several occasions this week. His father is a diabetic and had to throw away his insulin before buying a small cooler to store it on ice.

“He hasn’t had to do that since (Hurricane) Maria,” Aquino said, adding that neither he nor his wife have been able to report the outages to Luma. “They don’t answer.”

Luma, a consortium made up of Calgary, Alberta-based Atco and Quanta Services Inc. of Houston, serves some 1.5 million customers. It will operate the transmission and distribution system under a 15-year contract with Puerto Rico's government.