September US Wholesale Prices up 0.4% Amid Higher Food Prices

It reflected in part a 1.2 percent increase in food costs, the sharpest rise since a 5.6 percent spike in May when many food plants were shut down. 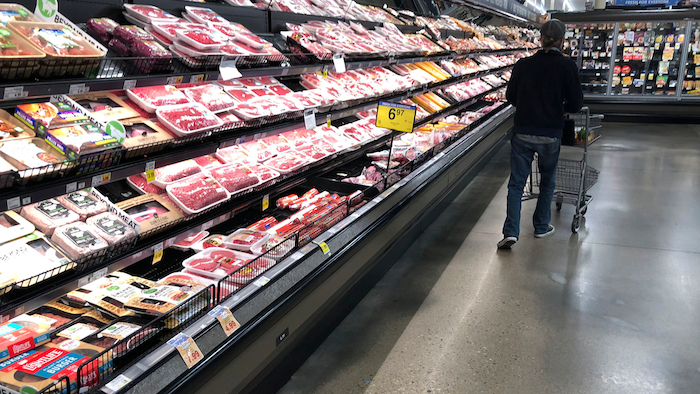 In this May 10, 2020 photo, a shopper pushes his cart past a display of packaged meat in a grocery store in southeast Denver.
AP Photo/David Zalubowski, File

WASHINGTON (AP) — U.S. wholesale prices jumped 0.4% in September as food costs rose by the largest amount since May.

The Labor Department said Wednesday that the September increase in its producer price index, which measures inflation before it reaches the consumer, followed a 0.3% rise in August and a 0.6% surge in July which had been the biggest monthly gain since late 2018.

The 0.4% September rise was bigger than economists had been expecting and reflected in part a 1.2% increase in food costs, the sharpest rise since a 5.6% spike in May, as coronavirus-related shutdowns at food processing plants triggered shortages.

For September energy prices fell for a second month, dropping 0.3% after a 0.1% dip in August.

The government reported Tuesday that inflation at the retail level was up 0.2% in September, just half the August gain, even though the price of used cars jumped by the largest amount in more than a half-century.

Over the past 12 months, inflation at the wholesale level is up just 0.4% while core inflation, which excludes volatile food and energy costs, is up 1.2%.

While the September rise in wholesale prices was bigger than expected, economists said the trend over the past year shows that inflation remains subdued, far below the Federal Reserve’s 2% target for annual increases.

“Inflation has accelerated from a resumption in activity. For now, the trend remains muted, driven by weak demand and ample excess capacity,” Rubeela Farooqi, chief U.S. economist for High Frequency Economics, said in a research note.

Let's call it a cautionary tale.
Jan 7th, 2021
Follow Us
Most Recent