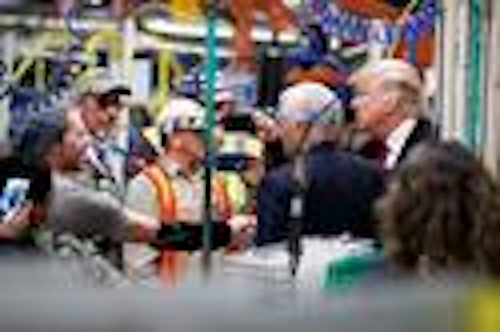 President-elect Donald Trump is renewing his pledge to build a wall along the U.S.-Mexico border during his first extensive public remarks since winning election.

He addressed border security briefly in a Thursday speech at an Indiana air conditioning company.

The incoming president seemed to pull back on his plan to build a wall in an interview soon after the election. He said at the time he would consider a fence in certain areas along the border.

There are currently several hundred miles of border barrier separating the United States and Mexico. Trump promised during the campaign to extend a concrete barrier across the entire 1,954-mile border.

Trump spoke at an Indianapolis factory where he says he helped prevent hundreds of jobs from moving to Mexico.

Trump said at the Carrier plant that more than 1,100 jobs will be maintained there. But he didn't talking about hundreds of workers who are still set to lose their jobs.

The incoming president is vowing to lower the country's business tax rate from 35 percent "hopefully down to 15 percent" and eliminate regulations.

Any changes to the tax code would need to be approved by Congress.

President-elect Donald Trump says he didn't mean it when he first vowed to stop an Indiana air conditioning company from shipping jobs to Mexico.

Trump said Thursday that the campaign-trail promise to save Carrier was initially only a symbol for the other manufacturing jobs he would save if elected. He said he thought it was too late to change the company's plans.

He says it wasn't until a week ago that he took his promise seriously, after watching a report about the Indiana company on the nightly news.

Trump says he called a company executive and helped negotiate a deal that would involve keeping about 800 union positions in Indianapolis that were initially set to be outsourced.

Indiana officials offered Carrier $7 million in incentives as part of the deal.

President-elect Donald Trump is touring the Indiana factory where he says he saved hundreds of jobs from moving to Mexico.

Trump, joined by his running mate Mike Pence, walked through a portion of the Carrier plant in Indianapolis.

He waved at some cheering workers, spoke with Carrier executives and inspected an assembly line.

Trump made saving the plant a central promise of his campaign.

A deal was reached this week to keep 800 jobs at the Indiana plant. But hundreds more are still set to lose their jobs.

A Carrier spokesman said earlier Thursday that the company received $7 million in tax incentives from Indiana to keep the factory running.

Republican Rep. Jason Chaffetz (CHAY'-fits) of Utah says it's too early for lawmakers to look into Trump's financial ties with foreign businesses and governments, or to deal with other questions.

Democrats have called for investigations into Trump's vast holdings, as well as his lease with the federal government for a luxury hotel near the White House.

Chaffetz says Trump "needs time to get his affairs in order. When he becomes the president we'll start providing some oversight of that."

Indiana is offering Carrier $7 million in incentives to keep some jobs in Indiana that the company had planned to shift to Mexico.

A company spokesman, Seth Martin, says the offer was made to the air conditioning and furnace maker after negotiations with President-elect Donald Trump.

State economic development officials could not immediately be reached for comment to confirm the figure.

The Associated Press previously reported the deal will involve keeping about 800 union positions in Indianapolis that were to be outsourced.

Trump made Carrier's plans to shutter the Indianapolis plant a central issue of his campaign. He repeatedly railed against the company for its plans to move production to Mexico.

The congressman named by Donald Trump to oversee the country's health care system would also have an impact on another major issue — immigration.

It's an area where Georgia Republican Tom Price has been at odds with the Obama administration.

If Price is confirmed by the Senate to lead the Department of Health and Human Services, he would head an office responsible for both resettling refugees in the United States and caring for immigrant children caught trying to cross the border on their own.

The five-term lawmaker has joined his Republican colleagues in objecting to Obama's immigration enforcement policies, including those at the border. Price co-sponsored a bill that sought to let states block Syrian refugees from settling in their communities.

Donald Trump's transition team says the incoming president will meet on Friday with North Dakota Sen. Heidi Heitkamp (HYT'-kamp), a Democrat up for re-election in 2018.

Trump and Vice President-elect Mike Pence plan to talk with Heitkamp at Trump Tower in New York. Trump won Heitkamp's home state with an overwhelming majority in the presidential election.

Trump spokesman Jason Miller says Heitkamp "comes very highly recommended, very highly qualified as a proven leader and would be an asset in any role or capacity."

Heitkamp says in a statement she's appreciative of the meeting and says that "whatever job I do, I hope to work with the president-elect" and her colleagues in Congress to help North Dakota.