Waste Not, Want Not

When people think about hazardous waste, they might imagine barrels marked with a skull and crossbones, containing highly toxic chemicals. But how does the Defense Logistics Agency support the disposal of hazardous waste—especially those the government produces daily?

The Environmental Protection Agency maintains definitions and lists of hazardous wastes—such as cleaners, chemicals, oils, and fuels. The Department of Defense also generates wastes that are not regulated as hazardous but that require controlled treatment and disposal, said Rick Klingel, DLA Disposition Services Environmental Division chief.

“There are some things that are not toxic or dangerous enough to be on the EPA’s lists but are still not so innocuous that you want to throw it in the regular garbage or toss it down the drain,” he said. “You treat oils differently from solvents, corrosives and paint waste.”

For example, latex paint does not qualify as hazardous waste, but oil-based paint or primer does. Likewise, used motor oil and antifreeze are technically not hazardous waste, but DLA has contractors who dispose of all these materials in an environmentally sensitive way.

While only half to two-thirds of what DLA Disposition Services receives is regulated as hazardous waste, the other portion “is toxic enough that you want to dispose of it responsibly,” Klingel said.

He noted the installations that generate the waste are bound by law to thoroughly identify the material.

“If they have an industrial process where they’re painting fighter jets, they’ve probably got tanks of solvent, because they have to strip the wing before they repaint it,” he said. “All kinds of chemicals may be mixed, as they have to clean out the paint guns frequently.”

The installations share information about the materials’ properties with the DLA Disposition Services team, who then issues a disposal task order to the contractor. The contractor must know the chemical composition of the waste to choose the proper treatment or disposal facility, Klingel said.

Around the world, DLA Disposition Services has about 100 field offices that dispose of excess property, he said. About two-thirds have environmental protection specialists whose main duty is to function as contracting officer representatives on about 80 contracts.

“You could break the mission into four chunks,” Klingel said. His staff and regional staffs around the world handle the first chunk: gathering the requirements and building the procurement request.

The DLA Disposition Services Acquisition office does most of the second chunk, he said: soliciting and awarding the contracts.

Next, the environmental protection specialists put on their COR hats to oversee the contractors doing the actual waste removals. “That’s the third chunk,” Klingel said. The Acquisition contract officers and worldwide CORs do most of the heavy lifting.

Contractors handle the fourth chunk, submitting documentation to prove they responsibly transported and delivered the waste to the disposal facility.

“For most of the missions DLA Disposition Services supports, DoD customers bring their excess property to our field offices. We physically take it and run it through the disposal cycle,” Klingel said. “Hazardous-waste disposal is the opposite of that. You don’t want to unnecessarily move pails and drums of toxic hazardous waste from place to place.”

That’s where the contractors come in. All the hazardous-waste contracts are service contracts, Klingel said.

“We take the service provider to the customer. We’re essentially a specialized, just-in-time hazardous waste contracting service,” he said. “When an installation has hazardous waste they want to dispose of, they’ll give us turn-in documents. But instead of physically bringing it to our site, we’ll do a receipt-in-place and then issue a task order to the contractor.”

From there, the contractor picks up the material from the installation and takes it to a landfill, incinerator or treatment site.

From contracting and manifest tracking to ultimate disposal, the focused effort by so many employees across the agency helps DLA avoid a type of waste many consider one of the most hazardous of all: waste of the American taxpayers’ money.

That’s a hazard no one at DLA will accept. 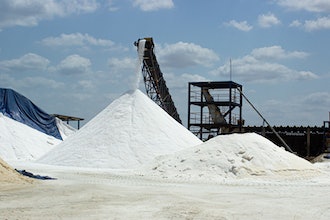