A closer look at the focal points of electrical systems. 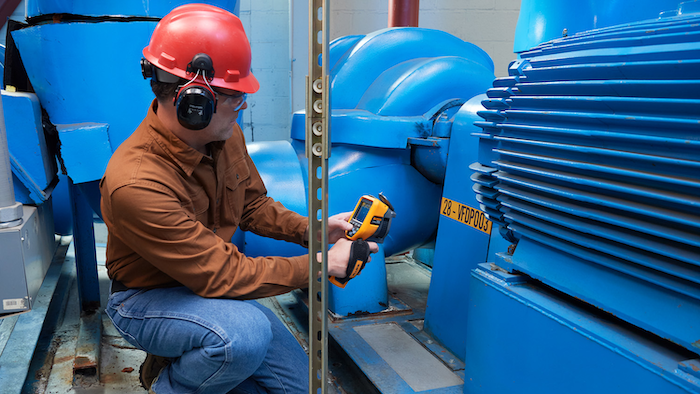 Thermal imagers and cameras work best to troubleshoot equipment issues when the equipment is running. Electrical equipment must be under at least 40 percent of nominal load to detect problems—although maximum load conditions are ideal, if possible. This includes motors, drives, and their associated electrical connections, wiring, fuses, and transformers. Thermal images indicate surface temperature of these different components and allow the user to determine next best steps, which might include further analysis, a fix, or replacement.

With thermal imaging, for the most part, you’re looking for hot spots in equipment, which is why it’s critical that the equipment be running to at least 40 percent of nominal load. While thermal imaging does provide immediate, in-the-moment information about malfunctioning equipment, it is also useful for building heat profiles.

Start by building heat profiles of your motors—these are simply high-quality thermal images of the motor running under normal operating conditions. This gives you a baseline of temperature measurements you can use later if/when the equipment has issues. The thermal images should include all the critical components such as the motor, shaft coupling, motor and shaft bearings, and the gearbox.

When inspecting low-load situations, be sure to note all possible problems, even if they reflect only a small temperature difference. As a load increases, the temperature will increase and if a problem exists, expect greater temperature differences at higher loads. All motors should list the normal operating temperature on the nameplate. Abnormal temperatures, which show up on a thermal imaging inspection, may indicate inadequate cooling, power quality issues, impending bearing failure, insulation failure, and/or shaft misalignment.

Capture thermal images of all electrical panels and other high-load connection points such as drives, disconnects, controls, and so on. Wherever you discover higher temperatures, follow that circuit, and examine associated branches and loads.

Compare all three phases side by side and check for temperature differences. A cooler-than-normal circuit or leg might signal a failed component. More heavily loaded phases will appear warmer. Hot conductors may be undersized or overloaded. However, an unbalanced load, an overload, a bad connection, and harmonics all create a similar pattern, so follow up with electrical or power quality measurements to diagnose the problem.

Look for connections that have higher temperatures than other similar connections under similar loads. That could indicate a loose, over-tightened, or corroded connection with increased resistance. Connection-related hot spots usually, but not always, appear warmest at the spot of resistance, cooling with distance from that spot.

In some cases, a cold component is abnormal due to the current being shunted away from the high-resistance connection. You may also find broken or undersized wires or defective insulation. The NETA (InterNational Electrical Testing Association) guidelines say that when the difference in temperature (DT) between similar components under similar loads exceeds 15 °C (~25 °F), immediate repairs should be undertaken.

If a fuse shows up hot on a thermal scan, it may be at or near its current capacity. However, not all problems are hot. A blown fuse, for example, would produce a cooler-than-normal temperature.

To evaluate an MCC under load, open each component and compare the relative temperatures of key components: bus bars, controllers, starters, contactors, relays, fuses, breakers, disconnects, feeders, and transformers. Incorporate the guidelines previously provided in this article for inspecting connections and fuses and identifying phase imbalance.

Tip: Measure the load at the time of each scan so that you can properly evaluate your measurements against normal operating conditions.

For oil-filled transformers, use a thermal imager to look at high- and low-voltage external bushing connections, cooling tubes, and cooling fans and pumps, as well as the surfaces of critical transformers. (Dry transformers have coil temperatures so much higher than ambient, it’s difficult to detect problems with thermal imagery.) Incorporate the guidelines previously provided for connections and imbalances.

Justin Sheard is a Senior Engineer and Application Specialist with the Fluke Industrial Imaging group.

7-Step Process to Improve Your Changeover

Why Understanding Torque Is Key in Pump System Installation & Maintenance

The accurate measurement of torque is a game-changer for pump reliability and efficiency.
Sep 29th, 2021

How Extended Reality Is Improving Maintenance and Training

Unanticipated and disruptive events have made strategies that optimize the digital thread more important than ever before.
Sep 13th, 2021

Why Get LED High Bay Lighting for Warehouse Operations?

Assessing the right metrics and assembling the necessary tools are critical.
Sep 8th, 2021

About 700 tradeswomen are participating the program, designed to help them navigate persistent bias and harassment on construction sites.
Sep 2nd, 2021

Boeing's performance is in stark contrast to that of SpaceX, NASA's other contracted taxi service.
Aug 16th, 2021

Get an in-depth comparison between intumescent paint and cementitious coatings and their best-fit applications.
Aug 5th, 2021

When temperatures increase in spring and summer, a neglected compressor will start to show signs of abandonment.
Jul 30th, 2021
Follow Us
Most Recent