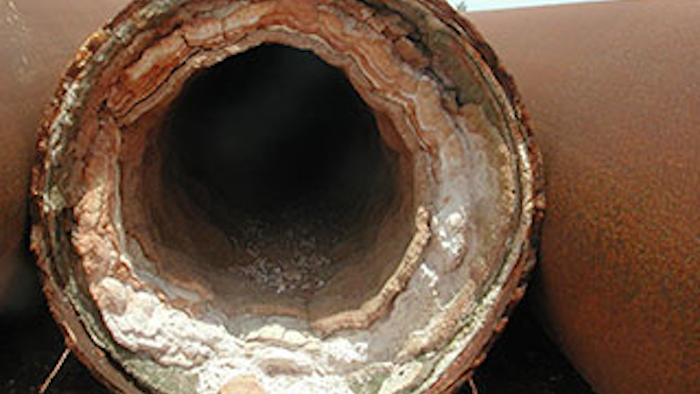 The common fouling mechanisms are:

Costs for extra fuel occur when fouling leads to extra fuel burning in boilers and furnaces or when other energy such as electricity or process steam is needed to overcome the effects of fouling. It is calculated that additional fuel and energy costs equate to billions of dollars each year.

Additional costs are attributed to maintenance charges for the removal of fouling deposits. Manufacturers of heat exchangers state that 15 percent of all factory maintenance costs are credited to heat exchangers and of that 50 percent is due to fouling. Add the costs of plant shutdown for days at a time, and the effect of fouling is only too plain.

There are now four popular methods of removing fouling:

Research carried out at Cranfield University in the United Kingdom identified conditions under which magnetic treatment can lead to a maximum of 70 percent reduction in calcium carbonate scale formation. The degree to which scale formation is inhibited has been identified to be dependent on a number of physicochemical conditions such as temperature, pH, hardness, and alkalinity.

During 2006-2007, Uniquest, an independent consulting and research company in Queensland, Australia was engaged to carry out laboratory investigations and testing on the heat exchanger tubes. An electronic water treatment device was installed onto a manifest heat exchanger. At the end of the 12-month period, it was found that no hard scale had formed on samples during the period of the trial – nor was there any biofouling slime, corrosion, or calcite sludge.

In process industries, it is common for chemicals to be added to water either because the water is being used for ‘scrubbing’ or cleaning, or to achieve a chemical mineral effect as part of the production process. This inevitably leads to limescale deposition. Scaling deposits are common in flowlines subject to changes of pressure or temperature. Regardless of how hard water effects are achieved, the outcome is the same: Scale formation results in reduced diameter or blocked pipes, reduced heat transfer efficiency, seized pumps, inoperarable valves, misleading meter readings, and defective heating elements.

To explain the effect of electronic scale removal, it is first important to understand the major factors that cause scale. While scale can be a complex of many minerals, calcium carbonate is the most prevalent in industrial processes.

Aqueous solutions can become supersaturated, which means that they contain higher concentrations of dissolved solute than their equilibrium concentration. Such solutions are not stable and are easily triggered into dropping back to saturation level, forcing the dissolved compound to precipitate. Even when a bulk solution is less than fully saturated, scale formation can occur spontaneously due to localized super saturation, at a surface for example.

Gases in general, and specifically carbon dioxide, are less soluble in water at high temperatures. Therefore, as the temperature rises, the dissolved carbon dioxide decreases. This increases the pH of the fluid, reducing the solubility of the calcium carbonate and forcing the mineral to deposit.

Carbon dioxide and gases in general are more soluble under higher pressure. Therefore, as the pressure drops, carbon dioxide gas will be forced out of solution, lowering the carbonic acid concentration. The rise in pH is associated with a drop in calcium carbonate solubility, leading to the formation of mineral scale deposits.

Electronic Water Treatment (EWT) is a non-invasive system utilizing a solenoid coil or coils wrapped around the pipework to be treated. A continuously frequency changing signal generator, within a specified range, supplies current to the coils. The pulse shaped current creates an induced electric field, concentric around the axis inside the pipe. As a consequence to this arrangement, any charged particle or ion moving within the field experiences a so-called Lorentz force generated by the interaction between charged particles and magnetic and electric fields.

The treatment influences the initial nucleation, resulting in crystals that do not "stick" together. Untreated water builds up matted structures that continuously grow. This treatment creates idiomorphic, scattered crystals, which do not form matted structures. They have a rotundas shape, which means that they have a larger volume in relation to a smaller surface. This feature makes them sensitive to water currents and they are easily flushed out of the pipeline. As no new scale layers are formed, the sheer force of the water flow will gradually remove existing layers of scale. The ability to adjust power, frequency, and coil configurations of products like the Scalewatcher on site enables performance to be optimized with no downtime and no pipe replacement.

The impact of zebra mussels extends from the Great Lakes watershed to the mouth of the Mississippi River. The mussels affect industry by clogging pipes and intake structure. Crustaceans and zebra mussels are similar in the way they use calcium—a key component of pipe scaling. They both convert calcium in a free ion form to calcium carbonate to construct their shell or exoskeleton. A study undertaken by Aquatic Sciences, Inc. – an international underwater inspection service – found that EWT technology was successful in removing calcium carbonate and thereby drastically reducing the level of zebra mussel infestation.