Robot is More Centaur than Humanoid

And it's dextrous. Also, another flying saucer, and Lockheed, Amazon and Cisco partner on Star Trek tech.

The Star Trek computer was the original inspiration for Alexa. Unfortunately, she's been more terrestrial, relegated to bedrooms, bathrooms and kitchen counters -- until now.

Amazon has partnered with Lockheed Martin and Cisco to integrate human-machine interface technologies into NASA's Orion spacecraft that work like Star Trek's computer.

They call it Callisto, and it will be onboard for Orion's Artemis I uncrewed mission that will travel around the moon and back to Earth. Callisto is named after a favorite companion of the Greek goddess Artemis. No worries if you didn't catch that one on your own, and look that relationship up if you have a chance: it is seedy.

Part Amazon's Alexa and Cisco's Webex, Callisto will demonstrate the use of commercial technology for deep space voice, video and whiteboarding communications. Lockheed is leading the integration since it designed and built the Orion spacecraft for NASA.

Callisto uses technology that enables Alexa and Webex on a tablet using NASA's Deep Space Network, instead of your neighbor's wi-fi.

While the upcoming mission scheduled for early 2022 is uncrewed, operators from mission control will interact with Callisto remotely. If everything goes according to plan, astronauts could soon have access to far-field voice technology, AI and tablet-based video collaboration.

MIT aerospace engineers are now testing a new rover concept that will use the moon's energy to levitate. That's right: another flying saucer, but unlike Zeva's Zero, this one won't be transporting any humans.

According to the researchers, the hovercraft could explore not just the moon but asteroids and other airless planetary surfaces. Because these planets don't have an atmosphere, they build up electric fields from direct exposure to the sun and surrounding plasma.

The charge is so powerful on the moon that it can levitate dust more than one meter above the ground using a charge similar to static electricity.

The concept, which quite intentionally looks like a flying saucer from classic sci-fi, uses ion beams to charge the vehicle and boost the surface's natural charge.

The saucer uses tiny ion thrusters called ionic-liquid ion sources. The nozzles connect to a reservoir containing room-temperature molten salt. When voltage is applied, the liquid's ions are charged and emitted as a beam through the nozzles.

In initial models, researchers showed that the hovercraft could feasibly levitate a small, two-pound craft 1 centimeter off the ground. Again, just trying to see if it's possible.

To demonstrate it further, they made a small, 60-gram hexagonal test vehicle about the size of your palm, and it worked.

The idea is that a spacecraft would be sent on various missions to asteroids and other destinations and deploy a fleet of small rovers that explore the surface.

This week, Beyond Imagination is headed to the 2022 Consumer Electronics Show to showcase Beomni, a humanoid, remote-piloted robot with incredible dexterity. Though it's more robot centaur than human: man on the top and machine on the bottom.

The fact that it is remotely piloted makes it easier to digest. While it can stack bricks and make eggs, they also show this thing working with hand tools and even administering medication. I guess that's where I draw the line: it can make me food or even mix me a drink, but I'm not ready for a piloted robot doing even the simplest medical procedure. I guess it's not much different than putting a face on the da Vinci surgical robot.

The idea, like much of remote-piloted technology, is to use it in challenging environments, like performing science experiments in microgravity or caring for the elderly.

The company even partnered with ZERO-G, which offers weightless experiences for $8,200 aboard a modified Boeing 727. A custom Beomni will attempt to perform experiments aboard the craft while the scientists pilot it from the ground.

What sets Beomni apart from similar human-piloted robots is the ease of use. Users can train up in just a few minutes and steer the robot using a VR headset and special gloves.

Another interesting part of Beomni is its AI Brain that augments and enhances human capabilities. This AI has multiple "lobes" related to a specific skill or set of skills. Over time, the AI Brain will learn and evolve as it assists with various tasks initially semi-autonomously but one day fully autonomously.

While it is currently limited to about 35-pound payloads, Beomni has nearly endless potential. The robot was recently used at an on-site pilot study to care for the elderly, and Beyond Imagination is currently scheduling more pilot studies across a range of industries for early 2022.

I like the clip where it looks like the pilot is using Beomni to attack him from behind. It took me a minute to put that one together after I finished hypothesizing the implications of a human using a remote-piloted robot to attack himself.

3D Printed Suicide Pod Could Be Operational by 2022 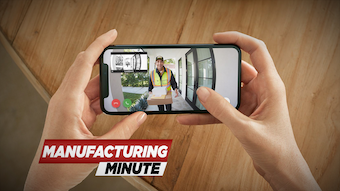