Sales rose even with retailers facing a host of challenges. 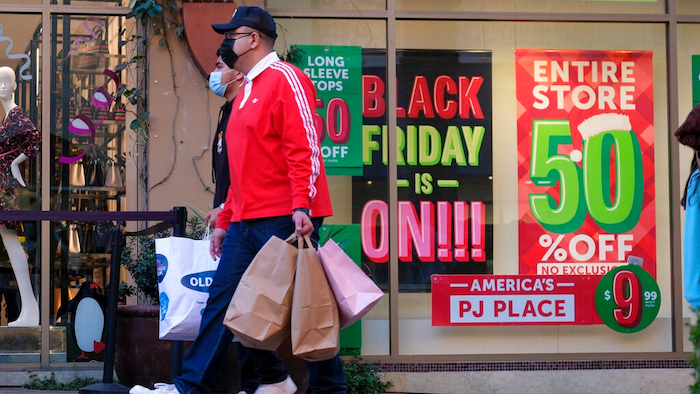 NEW YORK (AP) — Americans slowed their spending in November from October, but continued shopping despite higher prices and shortages in stores.

Retail sales rose a modest seasonally adjusted 0.3% in November from the month before when sales rose a revised 1.8%, the U.S. Commerce Department said Wednesday, a bit weaker than most economists had expected. Holiday shopping may have pumped up last month's numbers, and drew from November's, with news of shortages and supply chain backups in headlines.

Online sales were unchanged last month, while sales at department stores fell 5.4%. Electronics stores also saw a dip, posting a 4.6% decline. Restaurant sales rose 1%, while business at food and beverage stores was up 1.3%.

Sales rose even with retailers facing a host of challenges. Many have had to sharply increase pay to find and keep workers, which increases the cost of doing business. And some are scrambling to fill shelves with supply chains still backed up as countries emerge from the worst of the pandemic.

But the slowdown from October to November also may hint at the effect of rising prices.

The U.S. reported last week that that consumer prices jumped 6.8% over the past year — the biggest surge in almost four decades. Some of the largest cost spikes have been for things that consumers would be very aware of such as food, gasoline, homes, cars and clothing.

U.S. households, on average, are earning higher incomes than they did before the pandemic. Wages and salaries grew 4.2% in September compared with a year earlier, the largest annual increase in two decades of records. And the government provided a $1,400 stimulus check to all households in March as well as a $300-a-week unemployment aid supplement from March to September. Most households with children began receiving the $300 monthly child tax credit in July.

The National Retail Federation, the nation’s largest retail trade group, said this month that the holiday shopping season appears to be on pace to exceed its sales growth forecast of between 8.5% and 10.5% despite all of the challenges this year, from a new variant of the coronavirus, to soaring inflation.

Holiday sales increased 8.2% in 2020 compared with the previous year when shoppers, locked down during the early part of the pandemic, splurged on pajamas and home goods, mostly online.

The retail report released Wednesday covers only about a third of overall consumer spending and doesn’t include services such as haircuts, hotel stays and plane tickets.