It's an opportunity to better understand how volcanic eruptions form, develop and how and when they end. 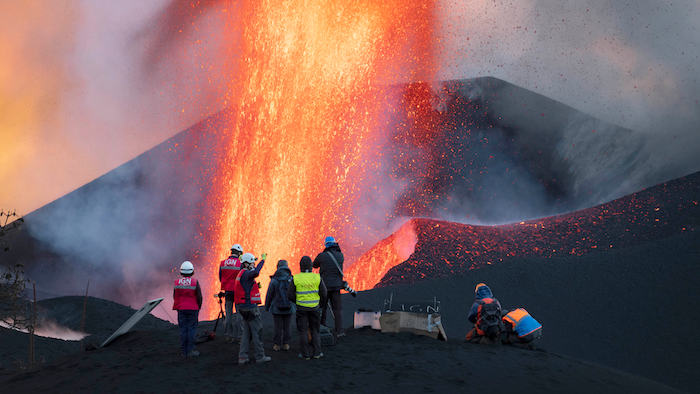 LAS MANCHAS, Canary Islands (AP) — They come with eagle-eyed drones and high-precision instruments. Aided by satellites, they analyze gas emissions and the flows of molten rock. On the ground, they collect everything from the tiniest particles to “lava bombs” the size of watermelons that one of nature's most powerful forces hurl as incandescent projectiles.

Scientists from around the world are flocking to La Palma, one of Spain's Canary Islands in the Atlantic Ocean, to take advantage of a volcanic eruption happening just an hour's drive from an international airport and the safety of being able to work under the escort of military brigades. They are applying cutting-edge technologies to scrutinize a rare volcanic eruption from the land, the sea, the air — and even space.

As in the two dozen other major live eruptions across the planet, from Hawaii to Indonesia, the ultimate goal on La Palma is to use a unique window of opportunity to better understand volcanic eruptions: how they form, develop and, even more crucially for the islanders, how and when they end.

But despite recent technological and scientific leaps, the researchers can only do a lot of estimating of what happens in the underworld where magma is formed and melts any human-made equipment. The deepest that humans have been able to drill into the planet’s crust has been just over 12 kilometers (7.6 miles), a feat that Soviet scientists achieved in 1989.

“There has been a lot of progress in the last 30 or 40 years in the understanding of geological and evolutionary processes, but it's still difficult to know for sure what happens at 40 to 80 kilometers (25 to 50 miles) of depth," said Pedro Hernández, an expert with the Canary Islands' volcanology institute, Involcan.

“We are probably beginning to know the stars better than what happens under our feet," he said.

Volcanic eruptions are a one or, at most, twice-in-a-generation event in the Canary Islands archipelago, which lies 100 kilometers (62 miles) northwest of Africa. Some of the Canary Islands are still growing due to magma accumulating underneath and, as is happening in La Palma, by forming lava peninsulas beyond the coastline.

The last eruption, a decade ago on the southern island of El Hierro, happened just off the coast, which made it more difficult for volcanologists trying to collect samples. The previous land volcano erupted in La Palma in 1971, the year when Valentin Troll, an expert in rocks with Sweden's Uppsala University and co-author of a geology study of the archipelago, was born.

“It’s been mind-blowing, literally, to see this dynamism in action,” the geologist said. “We are learning so much about how volcanoes work.”

Still, trying to compare notes with previous eruptions involves delving into centuries-old records, some from a time when photography did not exist.

When magma started accumulating deep under La Palma's Cumbre Vieja range, scientists were measuring the surge on the land's surface, concentrations of quakes known as seismic swarms and other signs of an impending eruption. They weren't able to predict the exact time of the eruption, but their assessments prompted authorities to begin the first evacuations just hours before it took place on Sept. 19.

Although one man died in November when he fell from a roof while cleaning off volcanic ash, there have been no deaths directly linked to the eruption.

Much of that is due to new technologies in volcanology: everything from drones that allow scientists to peek into a volcanic cauldron to supercomputers that run prediction algorithms.

The European Union's Copernicus satellite program has produced high-resolution imagery and mapping of the island to track quake-induced deformations, leading to near real-time tracking of lava flows and ash accumulation. Its experts have also been able to observe how large plumes of sulfur dioxide, a toxic gas, have traveled long distances across North Africa, the European mainland and even as far as the Caribbean.

At sea, Spanish research vessels are studying the impact the eruption is having on the marine ecosystem as fingers of lava extend out beyond the coast.

The next big leap for volcanology is expected when robotically operated rovers like the ones sent to the moon or Mars can be used in volcanoes, said Troll, who thinks knowledge from those rovers could guide how to rebuild the tourism-dependent island.

“We need to learn how we can protect the population as well as the growing industry to build a sustainable society,” he said.

Despite its limited resources, Involcan has been producing daily reports that help civil protection authorities on La Palma decide whether to evacuate or issue lockdowns when gas concentrations become too toxic. That means analyzing terabytes of data, both from automatic detectors in strategic locations and from samples recovered in field trips.

Most of the scientists' work has been focused on predicting how far the volcano’s damage will impact a community that has already lost thousands of houses, farms, roads, irrigation canals and banana crops. But the question of when the eruption will end has been haunting them.

Hernández said it would take at least two weeks of consistent lessening in soil deformation, sulfur dioxide emissions and seismic activity to establish whether the volcano's activity is waning.

Esteban Gazel, a geochemist with Cornell University in New York, said the Canary Islands are closely connected to activity going all the way to the core of the earth, making it even more difficult to make predictions.

“It's like treating a patient," he said. "You can monitor how (the eruption) evolves, but saying exactly when it will die is extremely difficult.”

In La Palma, Gazel collected the smallest particles that winds transport for long distances as part of NASA-funded research that could be key in minimizing the risks if a catastrophic eruption degraded air quality and influenced climate patterns. He also runs a parallel research program that looks at the volumes of gases that make an eruption more or less explosive.

Originally from Costa Rica, where he studied traces of past eruptions, Gazel has also conducted research in Hawaii's active Kilauea volcano. But the La Palma eruption has brought a new dimension to his work, he said, because of the different compositions of the rock and the easy access to the volcanic exclusion area.

“The more eruptions that we study, the more we are going to understand how they behave,” he said.