Tyson Says Mandate Spurred 96% of Workers to Get Vaccine

Tyson employees who don’t get the shot before the company’s deadline will be fired, but former workers will be welcomed back if they get vaccinated later. 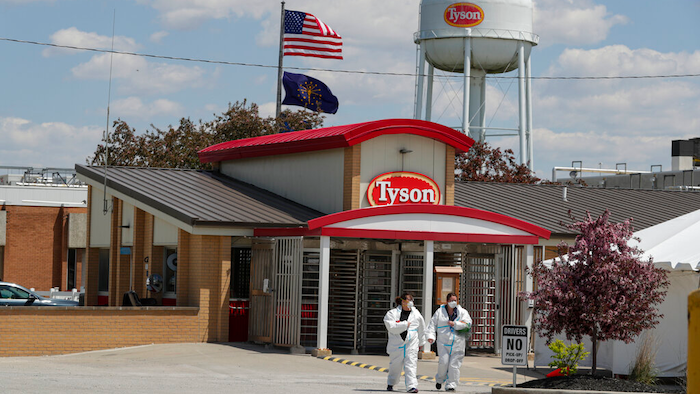 OMAHA, Neb. (AP) — Meatpacking giant Tyson Foods says more than 96% of its workers have been vaccinated ahead of the company's Nov. 1 deadline for them to do so.

The company based in Springdale, Arkansas, said the number of its 120,000 workers who have been vaccinated has nearly doubled since it announced its mandate on Aug. 3. At that point, only 50% of Tyson workers had been vaccinated.

“This is an incredible result — not only for our company, but for your families and our communities across the country, ” Tyson President and CEO Donnie King said in a note to employees Tuesday.

Tyson, which has long been dealing with worker shortages, said employees who don’t get vaccinated before the company’s deadline will be fired, but that the former employees will be welcomed back if they do get vaccinated later.

“I’d also like to say to those who remain unvaccinated — this is your choice, and we respect that choice," King said. “If you change your mind and want to rejoin Tyson — let us know. Our doors are open.”

Spokesman Gary Mickelson said very few employees have left the company so far because of the mandate.

The industry was hit hard by the pandemic in the spring of 2020 when the virus tore through meatpacking plants and forced the temporary closure of many of them because so many workers became ill or had to quarantine. The United Food and Commercial Workers Union said at least 132 of its members died from the virus during the outbreaks and another 22,400 of them were infected or exposed.

King said Tyson saw a significant decline in the number of virus cases in its workforce as more employees got vaccinated.

Tyson remains the only major company in the meatpacking industry to require vaccinations. The other meat giants such as JBS, Cargill and Smithfield Foods, have been relying on efforts to encourage workers to get vaccinated.

The UFCW union praised Tyson's progress with vaccinations because the mandate came with an agreement to provide 20 hours of paid sick leave to all the company's employees. The mandate also included exceptions for medical and religious reasons, but it wasn’t immediately clear how many of those exceptions Tyson granted.

"We urge every company, across this country, to do what is right by their frontline workers and work cooperatively with their unions and employees to help end this pandemic and keep all of America’s essential workers and their families safe,” UFCW President Marc Perrone said.