The company says it's buying the Tesla Model 3 small cars by the end of 2022. 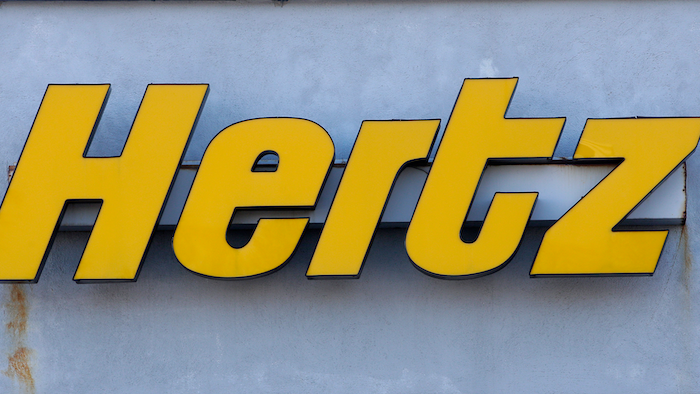 In this Tuesday, Nov. 28, 2017 photo a Hertz rental car logo rests on the front of a Hertz location, in Boston. Car rental company Hertz is ordering 100,000 electric vehicles from Tesla. The company says it’s buying the Tesla Model 3s by the end of 2022, and it also will buy electric vehicle chargers.
AP Photo/Steven Senne, file

The company says it's buying the Tesla Model 3 small cars by the end of 2022, and it also will set up its own electric vehicle charging network.

No price was given for the order, but it has to be worth around $4 billion because each Model 3 has a base price of around $40,000.

In an interview with The Associated Press, interim CEO Mark Fields wouldn't say how much Hertz is spending but said it has the capital and a healthy balance sheet after emerging from bankruptcy protection in June.

He says Teslas are arriving at Hertz sites already and should be available for rental starting in November.

He wouldn't say how much the company is spending on the deal or whether it got a bulk-buying discount from Tesla. But he said the Estero, Florida, company intends to lead as a mobility company with the largest electric vehicle rental fleet in North America.

Fields says EVs are now mainstream vehicles, and the company is starting to see rising global demand and interest.

Surveys show that during the past five years, consumers have progressed toward being interested in driving and buying electric vehicles, Fields said. “More are willing to try and buy,” he said. “It's pretty stunning.”

He said the rental car company also is talking to other automakers about buying more electric vehicles as more models enter the marketplace.

Hertz Global Holdings Inc. filed for bankruptcy protection in May 2020. It was among the first major corporations to be felled by the pandemic last year as infections surged and shut down travel on a global scale for both companies and vacationers.

Shares of Tesla rose 4.3% to $949.26 in trading before Monday's opening bell. That price would be a record high if it holds during daily trading.

The Tools You Need to Get Started with E-Commerce

We've all heard horror stories of e-commerce strategies gone awry, with thousands of dollars spent with nothing to show for it. This new video roundtable gives you the tools you need to get started and be successful with e-commerce. Watch now.
Nov 30th, 2021