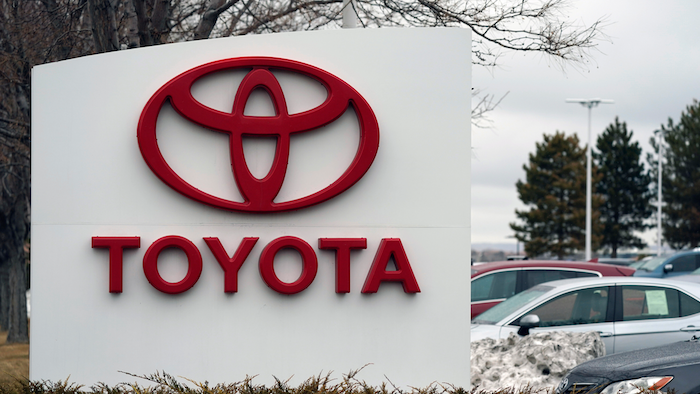 In this Sunday, March 21, 2021 file photo, the company logo adorns a sign outside a Toyota dealership in Lakewood, Colo. Nippon Steel Corp. is suing Toyota Motor Corp. over a patent for technology key for electric motors in a rare case of legal wrangling between Japan’s top steelmaker and automaker over intellectual property.
AP Photo/David Zalubowski, File

TOKYO (AP) — Nippon Steel Corp. is suing Toyota Motor Corp. over a patent for a technology used in electric motors in a rare case of legal wrangling between Japan’s top steelmaker and top automaker over intellectual property.

Toyota said it learned of the lawsuit “with great regret,” stressing it had checked on possible patent conflicts with Baosteel. Toyota sees Nippon Steel as an “important business partner,” supporting the Japanese auto industry for years, the maker of the Prius hybrid and Lexus luxury models said in a statement.

Baosteel said it disagreed with Nippon Steel's claim, stressing it repeatedly tried to communicate with the steelmaker.

“We believe that patent identification should be based on rigorous and scientific technical exchange and verification between the two sides,” it said in a statement.

"Baosteel will actively respond to the technical patent lawsuit filed by Nippon Steel to resolutely defend the rights and interests of the company.”

At the center of the lawsuit is the Japanese patent for non-oriented electrical steel sheets, an indispensable component in electric motors used in EVs, power plants and mobile phones, according to Nippon Steel.

Nippon Steel officials said its prized technology is critical to its competitiveness, as the world shifts to “a carbon neutral society” and innovations that reduce emissions are increasingly needed in steel manufacturing.

Nippon Steel is also demanding a court injunction against Toyota from manufacturing and selling electric vehicles and hybrid models in Japan with the motors that allegedly infringe the patent. Nippon Steel said there is no change to its plans to continue working with Toyota overall.

It said it was unable to resolve the dispute despite repeated discussions with both Baosteel and Toyota.

“Nippon Steel is taking these legal actions to protect its intellectual property rights,” the company said.