Perseverance has tested out all of its engineering capabilities, driven 1.6 miles over rough terrain and taken thousands of photos, but there are three major milestones that scientists are particularly excited about. 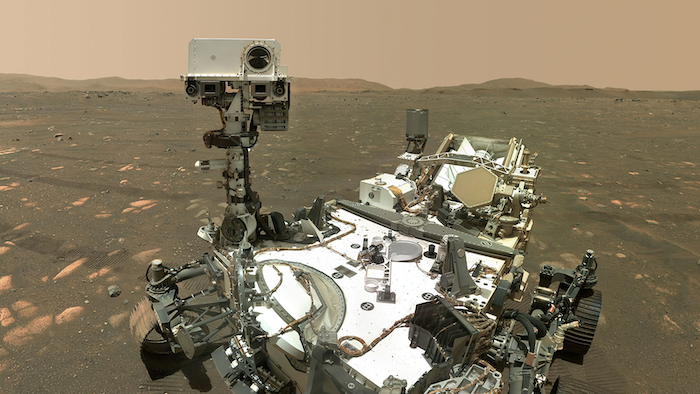 NASA’s Perseverance Mars rover took a selfie with the Ingenuity helicopter. This image was taken by the WATSON camera on the rover’s robotic arm on April 6, 2021, the 46th Martian day, or sol, of the mission.
NASA/JPL-Caltech/MSSS

In the short time since NASA’s Perseverance rover landed in Mars’ Jezero Crater on Feb. 18, 2021, it’s already made history.

At the moment, Mars and the Earth are on opposite sides of the Sun, and the two planets cannot communicate with each other. After working nonstop for the past 216 Martian days, the science teams are taking the first real break since the mission started.

We are two members of the Perseverance team, and with the rover hunkered down for the 20 days of conjunction, it is the perfect time to step back and reflect on the mission thus far.

Perseverance has tested out all of its engineering capabilities, driven 1.6 miles (2.6 kilometers) over rough terrain and taken tens of thousands of photos with its 19 cameras. Of all of these incredible successes, there are three major milestones that we’re particularly excited about: collecting the first rock core samples, flying the Ingenuity helicopter and publishing our first scientific results about the Jezero Crater delta.

Perseverance has already cached two samples of Martian rocks after drilling cores out of a rock, the first of which is the hole seen here.NASA/JPL-Caltech

One of Perseverance’s primary objectives is to use its sample caching system to extract small rock cores – roughly the size of dry-erase markers – and seal them in special sample tubes. A future mission will then pick them up and bring them on a long, interplanetary journey back to Earth.

For Perserverance’s first drilling attempt in August, our team picked a nice flat rock that was easy to access with the drill. After six days of assessing the bedrock – and finally drilling into it – we were thrilled to see a hole in the ground and get confirmation that the sample tube had sealed successfully. However, the next day the rover sent photos of the inside of the tube, and we saw it was actually empty. Some of Mars’ atmosphere is trapped inside and will be useful to study, but it’s not what the team was hoping for.

Ultimately, our team concluded that the rock itself was much softer than expected and it was completely pulverized during the act of drilling.

Three weeks and 1,800 feet (550 meters) later, we came across some promising-looking rocks protruding up above the red surface. This suggested that the rocks were harder and therefore easier to take a sample of. This time Perseverance successfully extracted and stored two core samples from the grayish, wind-polished rock. After collecting up to a few dozen more, it will drop the samples at a safe and easily accessible location on Mars’ surface. NASA’s Mars Sample Return mission, which is currently in development, will pick up the sample tubes in the late 2020s and bring them home.

But scientists don’t have to wait that long to learn about the rocks. At both sites, Perseverance used the SHERLOC and PIXL spectrometers on its arm to measure the composition of the rocks. We found crystalline minerals that suggest the rocks formed in a basaltic lava flow, as well as salt minerals that could be evidence of ancient groundwater.

Perseverance may be a long way from Earth, but it has a sidekick. The Ingenuity helicopter detached from the rover shortly after they landed on Mars and became the first craft to fly in the atmosphere of another planet.

Ingenuity is solar powered, weighs 4 pounds (1.8 kg), and its main body is roughly the size of a grapefruit. On April 19, 2021, the helicopter took its first flight, hovering 10 feet (3 meters) above the ground for 39 seconds before coming straight down. This short hop showed that its long blades could generate enough lift to allow flight in Mars’ thin air.

The next flights tested the helicopter’s ability to move horizontally, and it covered longer distances each time, traveling as much as 2,050 feet (625 meters) in its farthest trip to date.

Ingenuity has now flown 13 times and has captured detailed photos of the ground to scout out the rough terrain ahead of Perseverance. These images are helping the team decide how to navigate around obstacles on the way toward the rover’s eventual destination, a large delta in Jezero Crater. 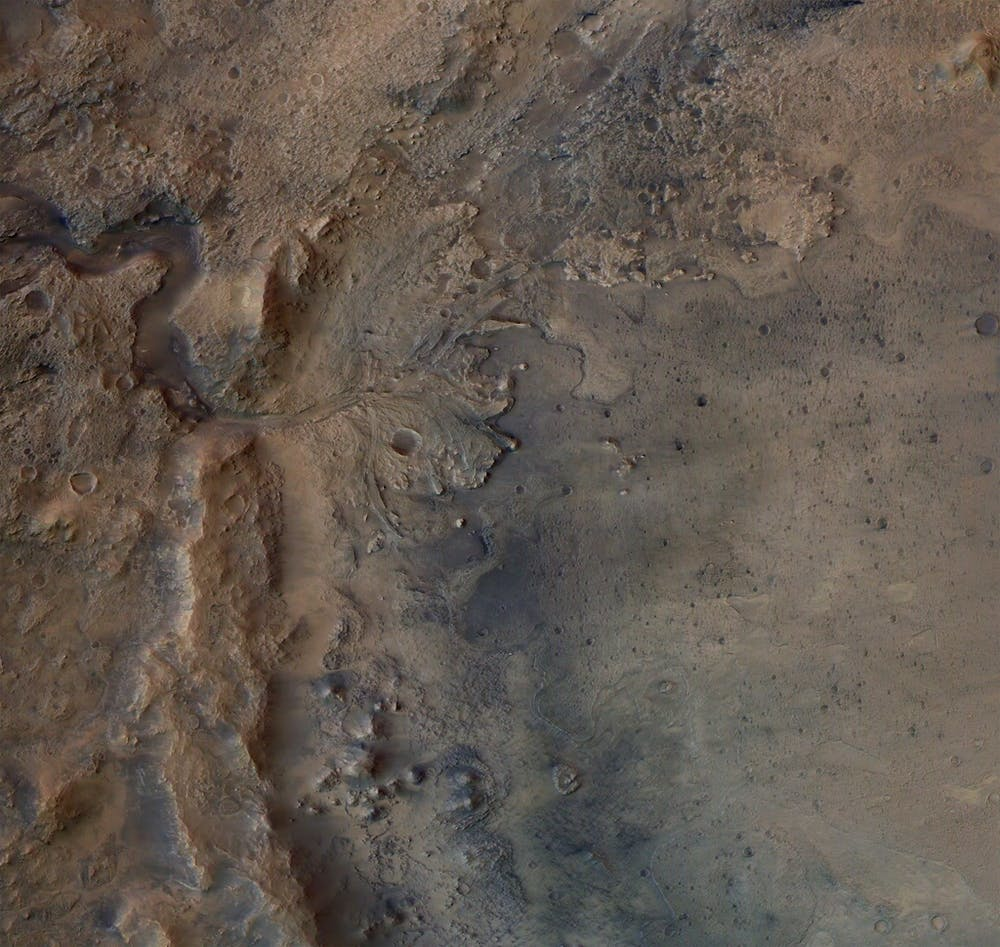 A delta in Jezero Crater, seen in this satellite image, is where Perseverance will collect the majority of its samples.ESA/DLR/FU-Berlin

Zooming into the Jezero delta

NASA selected Jezero Crater as Perseverance’s landing site specifically because it gives the rover access to a large stack of rocks that sits at the end of a dry river valley. Based on satellite images, scientists think that these rocks are made of sediment deposited by an ancient river that flowed into a lake roughly 3.5 billion years ago. If true, this location could have been an excellent environment for life.

However, the resolution of the satellite data isn’t high enough to say for sure whether the sediments were deposited slowly into a long-lived lake or whether the structure formed under drier conditions. The only way to know with certainty was to take images from the surface of Mars. 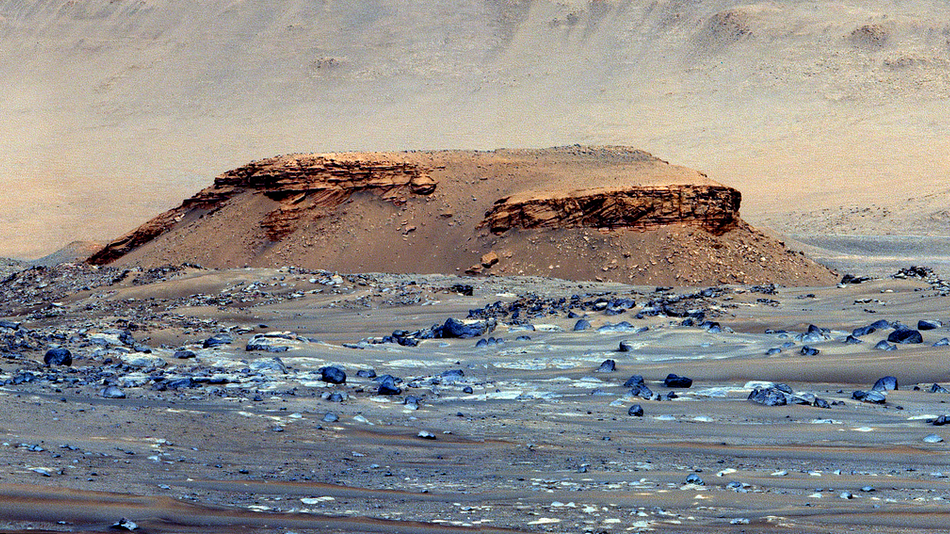 This structure of boulders and sediment shows the geological history of the delta.NASA/JPL-Caltech/ASU/MSSS

Perseverance landed over a mile (roughly 2 kilometers) away from the cliffs at the front of the delta. We are both on the team in charge of the Mastcam-Z instrument, a set of cameras with zoom lenses that would allow us to see a paper clip from the opposite side of a football field. During the first few weeks of the mission, we used Mastcam–Z to survey the distant rocks. From those panoramic views, we selected specific spots to look at in more detail with the rover’s SuperCam, a telescopic camera.

When the images got back to Earth, we saw tilted layers of sediments in the lower parts of the 260-foot-tall (80 meters) cliffs. Toward the top we spotted boulders, some as large as 5 feet (1.5 meters) across.

From the structure of these formations, our team has been able to reconstruct a geological story billions of years old, which we published in the journal Science on Oct. 7, 2021.

For a long time – potentially millions of years – a river flowed into a lake that filled Jezero Crater. This river slowly deposited the tilted layers of sediment we see in the cliffs of the delta. Later on, the river became mostly dry except for a few big flooding events. These events had enough energy to carry big rocks down the river channel and deposit them on top of the older sediment; these are the boulders we see atop the cliffs now.

Since then, the climate has been arid and winds have slowly been eroding away the rock.

Confirming that there was a lake in Jezero Crater is the first major science result of the mission. In the coming year, Perseverance will drive up to the top of the delta, studying the rock layers in microscopic detail along the way and collecting many samples. When those samples eventually make their way to Earth, we will learn if they contain signs of microbial life that may once have thrived in this ancient lake on Mars.

This article is republished from The Conversation under a Creative Commons license. Read the original article here: https://theconversation.com/perseverances-first-major-successes-on-mars-an-update-from-mission-scientists-168730.