Robots that Can Move Your Couch

The robots work independently but cooperatively — and don't need pizza as a reward. 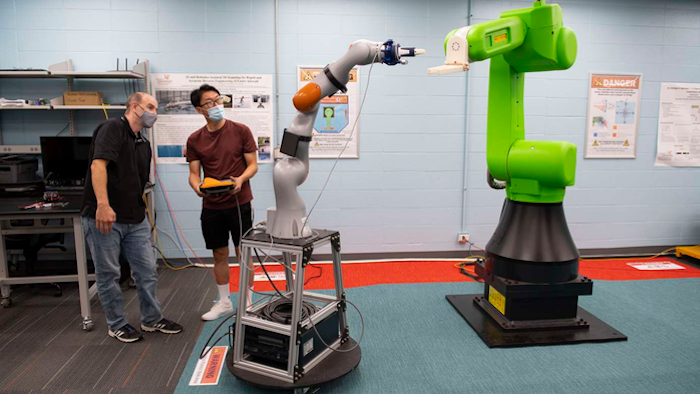 To train robots how to work independently but cooperatively, researchers at the University of Cincinnati gave them a relatable task: move a couch.

If you’ve ever helped someone move furniture, you know it takes coordination — simultaneously pushing or pulling and reacting based on what your helper is doing. That makes it an ideal problem to examine collaboration between robots, said Andrew Barth, a doctoral student in UC’s College of Engineering and Applied Science.

In the Intelligent Robotics and Autonomous Systems Lab of UC aerospace engineering professor Ou Ma, student researchers developed artificial intelligence to train robots to work together to move a couch — or in this case a long rod that served as a stand-in — around two obstacles and through a narrow door in computer simulations.

“We made it a little more difficult on ourselves. We want to accomplish the task with as little communication as possible among the robots,” student Barth said.

He was lead author of a study on the project published in the journal Intelligent Service Robotics. Professor Ma, UC doctoral student Yufeng Sun and UC senior research associate Lin Zhang were co-authors.

Neither robot directed the other. And the two robots didn’t share their strategy in advance to complete the task. Instead, they turned to an artificial intelligence called genetic fuzzy logic. Fuzzy logic is an intelligent control technique that mimics human reasoning by replacing a simple binary classification (yes, no) with degrees of right or wrong. Genetic algorithms modify individual solutions to “learn” from past results to optimize performance over time.

“Ultimately, we want to expand this to 10 or more robots working cooperatively on a project,” Barth said. “If you want to build a gigantic habitat in space, say, you’ll need a lot of robots working together. But if you were relying on a communications network and it goes down, then your whole project is done.”

If robots can work independently, losing one won’t make much difference. The others can compensate to complete the mission, Barth said.

Robots were given the task of carrying the virtual couch around two obstacles and through a narrow door. The robots successfully completed the task 95% of the time in simulations.

More importantly, the robot work partners were 93% successful in a completely new scenario — with two new unfamiliar obstacles and a target door in a different location. And the robots had nearly equal success without re-training, even when researchers changed other factors such as the size of the “couch.”

“If you can train robots to work semi-independently with as little information as possible, then you made your system more robust to that failure and made it easier for large groups to collaborate,” Barth said.

“Our long-term goal is for multiple robots to be able to cooperate to perform difficult tasks — like moving furniture,” Ma said.

Robotics have come a long way in the past 20 years, contributing to industry, space exploration and commerce.

Researchers are working hard to improve human safety around robots, which can boost productivity. Likewise, robots that can work cooperatively would create huge opportunities, Ma said.

The control system he and his students are developing is scalable, which means they can add any number of robots to a task.

“And you don’t need to retrain them if suddenly it’s just four or six,” he said. “If one or two fail, the rest can carry on. That’s the key.”

Plus, you don’t need to reward your robot helpers with pizza.