The pilots landed too fast and waited too long to deploy speed-reducing panels. 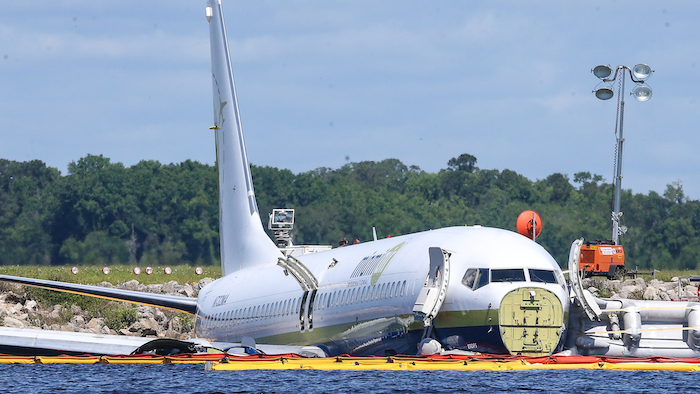 In this May 4, 2019, file photo, a charter plane carrying 143 people and traveling from Cuba to north Florida sits in a river at the end of a runway in Jacksonville, Fla. Investigators say the loss of braking power on a rain-soaked flooded runway caused a cargo plane chartered by the Pentagon to slide into a Florida river in 2019, the National Transportation Safety Board said Wednesday, AUg. 4, 2021.
AP Photo/Gary McCullough, File

Investigators say a rain-soaked runway and the pilots' failure to anticipate the poor conditions caused a plane chartered by the Pentagon to slide into a Florida river two years ago.

The National Transportation Safety Board said pilots of the Miami Air International plane landed too fast and waited too long to deploy speed-reducing panels as the Boeing 737 touched down at Jacksonville Naval Air Station on May 3, 2019.

Investigators said that even without those mistakes, the plane would not have been able to stop on the ungrooved runway because of the amount of standing water. They said in a report released Wednesday that Miami Air failed to give pilots adequate guidance to evaluate braking conditions on wet runways.

Proper estimates about the conditions “would have prohibited (the pilots) from attempting the landing," the investigators said.

Two months after the accident, the Federal Aviation Administration issued a safety alert tightening guidance about landing on ungrooved runways when moderate to heavy rain is expected.

The Miami Air jet hydroplaned off the runway and wound up in shallow water of the St. Johns River. None of the 143 passengers and crew were seriously hurt, but several pets in the cargo hold died.

As the Boeing 737 approached the naval air station, the pilots talked to air traffic controllers about the rainstorm. The report said that as the plane descended, the captain failed to set the speedbrakes — movable panels on the wings that create drag — as called for in the landing checklist.

After touchdown, the captain applied one of the engine thrust reversers but didn't feel the plane slowing. The speedbrakes came on automatically, but a few seconds later than if the captain had set them manually, the report said.

The plane drifted to the right and went off the end of the runway, hit a seawall and came to rest in the river, with its belly under water.

The NTSB said the excessive speed and delay in using speedbrakes “contributed to the severity of the accident.” But investigators calculated that the plane would not have been able to stop on the runway anyway because of the standing water.

The report said the pilots missed “several cues” that should have led them to call off the landing and, presumably, land somewhere else.

However, the investigators said, the pilots might have been under pressure to complete the flight because it was running late. They added that the first officer's inexperience — only 18 hours flying Boeing 737s — may have put too much burden on the captain.

After the plane stopped in the river, the crew began an emergency evacuation in the dark, with rain pounding down. Cellphone video showed crew members and passengers gingerly walking the plane’s wings and a man carrying an infant walking past people wearing life jackets.

Miami Air went out of business last year, saying its financial troubles were a direct result of the coronavirus pandemic that devastated air travel.

Wing May Have Fallen Off Plane Before Fatal Crash