Environmentalists believe shifting packaging disposal costs away from taxpayers and toward producers is long overdue. 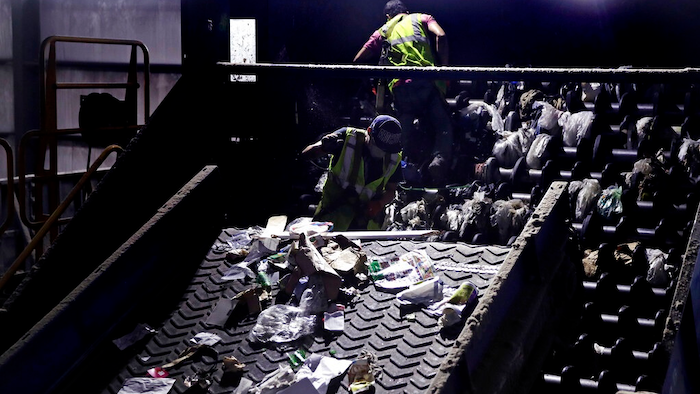 In this Thursday, Sept. 6, 2018, file photo, workers clean consumer plastic shopping bags from the clogged rollers of a machine which separates paper, plastic and metal recyclable material, in a processing building at EL Harvey & Sons, a waste and recycling company, in Westborough, Mass. States around the country are looking to adopt new recycling regimes that require producers of packaging to pay for its inevitable disposal.
AP Photo/Charles Krupa, File

PORTLAND, Maine (AP) — States across the U.S. are looking to adopt new recycling regimes that require producers of packaging to pay for its inevitable disposal — but industry is digging in to try to halt the movement.

Maine became the first state to adopt such a program in July when Democratic Gov. Janet Mills signed a bill that requires producers of products that involve packaging materials to pay into a new state fund. The fund will be used to reimburse municipalities for recycling and waste management costs.

Oregon has approved a similar bill that is awaiting signature from Democratic Gov. Kate Brown, and at least six other state legislatures have similar bills pending, said Yinka Bode-George, environmental health manager for the National Caucus of Environmental Legislators. Lawmakers in at least four other states have also expressed interest in such bills, she said.

The states with active bills — most of them Democratic-leaning — include large, influential economies like New York and California. Environmentalists in those states and others believe shifting packaging disposal costs away from taxpayers and toward producers is long overdue.

More laws like Maine's would incentivize industry to stop creating excessive packaging in the first place, Bode-George said. “This culture of throwing things away after one use is part of the problem,” she added. “It's important for the producers of these materials to really take ownership of them.”

Maine's bill is designed to cut down on plastic, cardboard, paper and other packaging waste by requiring what the state called “producer payments.” The companies can lower the payments by implementing their own, independent recycling programs or simply reducing packaging. The fees will go to a private organization that will reimburse municipalities for recycling and waste management costs and invest in education geared at reducing packaging and improving recycling.

Oregon's proposed law is slightly different in that it would require producers and manufacturers of packaging to create a nonprofit group tasked with developing a recycling plan for packaging materials.

Advocates of these strategies sometimes call them “extended producer responsibility.” They are widely used in Europe as well as in some Canadian provinces. The National Waste & Recycling Association, a Virginia-based trade group, has said it can support such programs when they focus on “incentives to create new markets for recycling materials," because buyers are needed for all these recyclables.

“The most important thing is that there's a market for it,” said Brandon Wright, a spokesperson for the group.

But the moves have ignited heavy pushback from several sectors of American industry where fears are widespread that the new laws will drive up the cost of doing business in some states. New recycling obligations could cause companies to pull out of those states or pass on costs to consumers, industry members say.

The American Institute for Packaging and the Environment, or AMERIPEN, which represents the packaging industry, had asked Mills to veto Maine's bill and plans to play an active role in an upcoming rulemaking process about it, said Dan Felton, the group's executive director.

AMERIPEN hoped to work with Maine on a different new recycling scheme, but the approved law leaves "producers and the people of Maine on the outside of the process and forced to foot the bill for a system where the Maine Department of Environmental Protection is the sole decision-maker,” Felton said.

The proposed recycling laws have also generated pushback from industries that don't work directly in packaging, but rely on it. Robert Luria, government relations manager for Scotts Miracle-Gro Company, told a state committee that Maine's law “has the potential to increase inefficiencies in Maine's recycling system."

Recycling, particularly of plastics, has been further complicated by China's decision to stop accepting plastic waste from other countries.

Advocates say the new recycling bills could help with that waste disposal problem by decreasing reliance on single-use plastic products. Maine's bill sent "a strong signal that it’s time for big corporations and brands to do their part to curb plastic pollution and reduce wasteful packaging,” said Sarah Nichols of the Natural Resources Council of Maine.

In Maine, industry representatives who opposed the bill know the changes are coming and are working with the state to craft rules they can live with.

“I think this is just the very start of what this program will evolve into both in Maine and around the country," Cummings said.