Jobs Boom for New Grads, but Competition Is Steep

This year's graduates will have to compete, in many cases, with 2020 graduates who are still seeking their first full-time job. 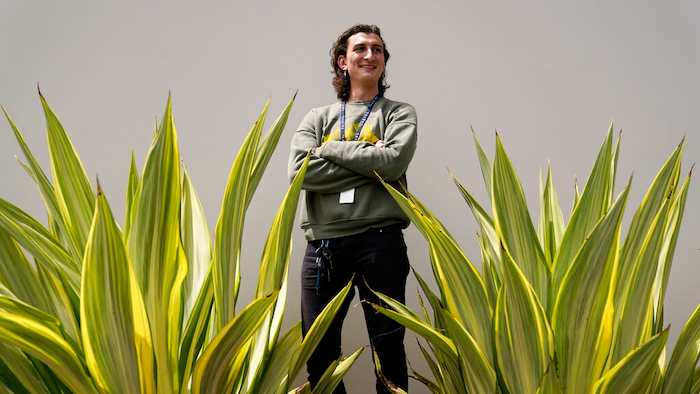 Lucius Giannini stands for a portrait Thursday, April 15, 2021, in San Diego. Giannini graduated from the University of California at San Diego at the end of last summer with a degree in political science. He had hoped to find work with the Peace Corps, or maybe teaching English overseas. But the Peace Corps was bringing all its volunteers home, and no one was hiring for overseas teaching.
AP Photo/Gregory Bull

After a painful year of joblessness, the future has finally brightened for Alycia St. Germain, a 22-year-old college senior at the University of Minnesota.

Having lost a part-time gig at Barnes and Noble last March as the viral pandemic tore through the U.S. economy, she was left unemployed like tens of millions of other Americans. But now, St. Germain has a job lined up — with benefits — even before graduation and in her chosen field of developmental psychology. A family friend established a new child-care center in St. Paul, and St. Germain landed a job as an assistant in the infant room.

“This," she said, “is probably the most positive thing that could happen.”

Not all new college grads will find a job so quickly. But collectively, this year's graduating class is poised for better prospects than were the 2020 seniors, who had the misfortune to graduate into the depths of the brutal coronavirus recession. Though the competition will be stiff — this year's graduates will have to compete, in many cases, with 2020 graduates who are still seeking their first full-time job — employers are ramping up hiring. And many are desperate for workers.

On Friday, the government reported that employers added just 266,000 jobs in April, a surprisingly sharp slowdown from the 770,000 that were added in March. Yet much of that lapse reflected a shortage of available workers, economists say. The economic rebound is strengthening so fast that many businesses are struggling to quickly attract enough applicants to fill jobs.

The pace of job openings, in fact, has fully recovered from the pandemic and is now far above pre-recession levels, including in professional occupations that college students are more likely to seek and that can typically be done from home.

“I don’t think this recession will be as bad for college graduates as previous recessions have been,” said Brad Hershbein, an economist at the Upjohn Institute in Kalamazoo, Michigan. “That segment of the labor market is going to recover faster than other segments where jobs can’t be done remotely.”

Hershbein said he worries, though, that the pandemic will dim the economic prospects of young adults who were unable to complete, or even start, their educations during the pandemic. Data has shown sharp drops in enrollment at community and four-year colleges.

Even so, college seniors will be competing against a larger-than-usual universe of job seekers when you include last year's crop of graduates.

“Because there is a large pool of unemployed workers, companies can pick exactly who they want and skip over people with less experience,” said Elise Gould, a senior economist at the Economic Policy Institute.

Graduating into a recession has historically led to poor outcomes for many young people, with research showing that they sometimes bear long-running scars. Starting a career in a recession can lead to lower incomes for as long as a decade afterward for those graduates, compared with their peers who completed college just before or after a recession.

The sectors of the economy that face the most difficulty in regaining all their lost jobs are the service sectors that were hit hardest by the pandemic recession: Restaurants, bars, hotels, gyms, and entertainment venues. Though college graduates often take such jobs temporarily, they typically seek out careers in professional or technical fields, where job losses were far less severe last year and are now recovering.

Sheila Jordan, chief digital technology office at Honeywell, said she's recruiting more students and recent graduates for paid internships than she did last year — internships that often lead to permanent jobs. She is especially interested in students with a range of technical backgrounds, including software, data analytics and cybersecurity.

“We like to recruit once, hire twice,” Jordan said of the internships. “That’s a feeder group for us.”

Lucius Giannini, who graduated last summer from the University of California San Diego with a degree in political science and public policy, had hoped to find work with the Peace Corps or teaching English overseas. But when COVID-19 struck, the Peace Corps brought home all its volunteers. And no one was hiring for overseas teaching.

Giannini moved back in with his parents and broadened his job search for eight months. In March, he secured a paid marketing internship with a small pharmaceutical company.

It’s not his field of expertise, but, Giannini said, “They figure, ‘You’re young, you understand social media.’ So that’s what I do.”

The internship will be over by the end of summer, so he may be back on the job hunt. He is also applying to law school.

For college grads who do find jobs, the “onboarding” process, through which they meet co-workers and become acclimated to their employer's culture, has had to occur in an entirely new remote setting.

Still, that hasn't always worked out so badly. Some companies have ramped up their efforts to make new employees feel welcome, even if they are working remotely.

Dominique Davis, a senior at Tennessee State University, interned with Toyota last summer from her family home in Danville, Illinois. Yet she said she met just as many people then as she did in the summer of 2019, when she interned at the company's headquarters in Plano, Texas.

“I think I networked even more this term than being in the building,” she said. “It forces you to reach out. It’s less awkward, less intimidating. I would have conversations on a daily basis with the VP of my department. Normally, you can’t just go into his office and sit down and have a conversation.”

Davis plans to go straight into graduate school for her MBA. But as president of the student body, she is well-aware that some other seniors are struggling with their next steps.

“I have heard of multiple students who are having trouble getting interviews or internships,” Davis said. “Especially in the medical fields, some students are hesitant, afraid because of the virus.”

Natalie Naranjo-Morett, who will graduate in June with a history degree from UCSD, is looking for work in museums.

“But,” she said, "that’s become very difficult because of the pandemic.”

Museums have been clobbered over the past year. In a recent survey by the American Alliance of Museums, nearly one-third of museum directors said they either faced a significant risk of closing permanently by next fall or didn’t know if their institutions would survive.

Naranjo-Morett, who has applied unsuccessfully for some internships, says there appear to be few job openings. She’d like to find work related to her history degree.

But “it’s so difficult at this point, I kind of would go for anything,” she said.