This is despite uncertainties about melted fuel inside the plant's three reactors. 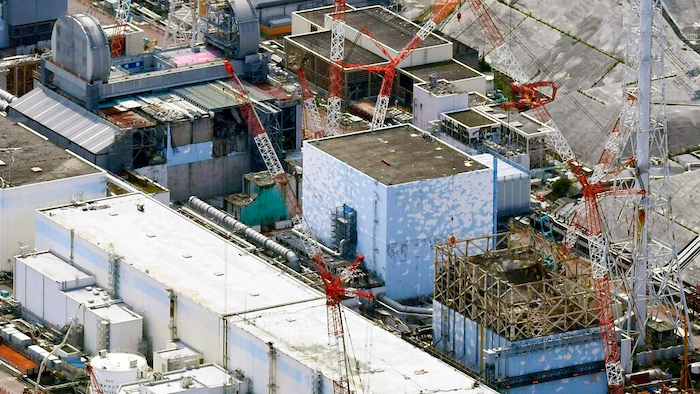 TOKYO (AP) — The head of the wrecked Fukushima nuclear plant says there's no need to extend the current target to finish its decommissioning in 30-40 years despite uncertainties about melted fuel inside the plant's three reactors.

Ten years after meltdowns of three of its reactors following a massive March 2011 earthquake and tsunami that devastated northeastern Japan, the Fukushima Daiichi plant has stabilized but faces new challenges.

Nuclear regulators recently found fatal levels of contamination under the lids of two reactors, a test removal of melted fuel debris from one reactor has been delayed for a year, and a recent earthquake may have caused new damage to the reactors.

About 900 tons of melted fuel debris remain inside the plant's three damaged reactors, and its safe removal is a daunting task that its operator, Tokyo Electric Power Co., or TEPCO, and the government say will take 30-40 years to finish. The removal of spent fuel units from cooling pools is already being delayed for up to five years.

But Akira Ono, who as head of the plant is also its chief decommissioning officer, said he doesn't plan to change the current goal to finish decommissioning between 2041 and 2051.

“I don't think we need to revise the target right now,” Ono said Tuesday in an online interview with The Associated Press. “We will stick to the 30-to-40-year finishing target, and will compile a timeline and technology and development plans accordingly.”

He said TEPCO plans to focus primarily on the coming decade and hopefully will release a new 10-year road map by the end of March.

The recently discovered fatal levels of cesium on the bottom of shield plugs atop the primary containment chamber at the No. 2 and 3 reactors will not affect near-term decommissioning work, but could complicate future plans, Ono said.

A lot about the melted fuel, which fell from the core to the bottom of the primary containment chambers in Units 1, 2 and 3, remains unknown, Ono said, adding that it's too early to decide how the plant should look at the end of the cleanup.

“It is a difficult question," he said. “If you ask 10 people, everyone has a different answer.” Local officials in Fukushima have said they expect the plant complex to be a flatland where people can walk freely.

Ono said the plant's end state should be discussed by the government, local residents, experts and other concerned parties, and should be decided by a consensus.

Some experts are still skeptical that the removal of all of the melted fuel debris is possible and suggest a Chernobyl-style entombment of the plant. Ono, however, denied that option, saying a long-term abandonment could pose a bigger risk than a controlled cleanup and hinder the region's recovery.

Ono said the removal of the melted fuel debris will hopefully progress on track during the 2030s. “The next 10 years for us is to prepare for that goal,” he said.

Massive radiation from the reactors caused about 160,000 people to evacuate from around the plant. Tens of thousands are still unable to return home.