Officials said it would pump out too much pollution. 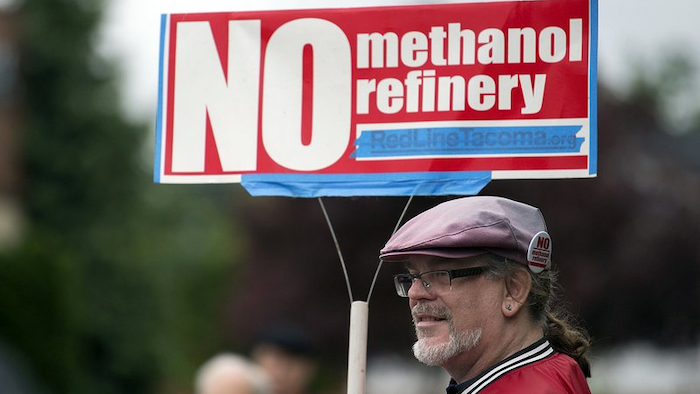 Mark Keely of Kalama, Wash., stands with other protesters outside the Washington Department of Ecology's Vancouver field office in 2017.
Amanda Cowan/The Columbian via AP, File

OLYMPIA, Wash. (AP) — Officials in Washington state denied a key permit for a large proposed methanol plant Tuesday, saying the project that aims to send the chemical to China to be used in everything from fabrics and contact lenses to iPhones and medical equipment would pump out too much pollution.

A significant increase in greenhouse gas emissions and inconsistencies with the Shoreline Management Act were the main reasons the permit was rejected for the project planned on the Columbia River, the state Department of Ecology said in a news release.

The $2 billion Northwest Innovation Works plant proposed in Kalama would take natural gas from Canada and convert it into methanol. It would then be shipped to China to make olefins — compounds used in many everyday products.

An environmental analysis done by the state agency found that the facility would be one of the largest sources of carbon pollution in Washington, emitting nearly 1 million metric tons a year within the state, and millions of tons more from extracting natural gas, shipping the product to Asia and final uses of the methanol, officials said.

“I believe we were left with no other choice than to deny the permit for the Kalama project," Ecology Director Laura Watson said in a written statement. "The known and verifiable emissions from the facility would be extremely large and their effects on Washington’s environment would be significant and detrimental.”

The Department of Ecology last year had demanded additional environmental analysis, saying after five years of planning, its backers had failed to provide enough information about the greenhouse gas emissions and how they would be offset.

The company has 21 days to appeal the permit decision.

“While we are disappointed by this ruling and evaluating our options for an immediate appeal, we feel confident that science and reason will prevail,” Kent Caputo, attorney for Northwest Innovation Works, said in a news release.

The company is backed by the Chinese government and has said the project will create 1,000 jobs and generate up to $40 million in annual tax revenue. The company also has said it would offset any emissions produced directly or indirectly in Washington state.

“We volunteered to set mitigation standards that will make Washington state the national leader,” Northwest Innovation Works CEO Simon Zhang said in the news release. “We want to create a model project for Kalama, the state, and the nation.”

Gov. Jay Inslee, who once backed the project as a boost to the economy, changed his stance in May 2019 as he signed a bill banning fracking, The Seattle Times reported.

Inslee said at the time that he couldn't in good conscience support the methanol plant, along with a Tacoma liquified natural gas project, because they wouldn't accomplish what's necessary to combat climate change. He also said the withdrawal of his support would not affect the regulatory decision-making process.

Conservation groups, including Columbia Riverkeeper, the Sierra Club and the Center for Biological Diversity, have been steadfast in their opposition.

“We can’t keep pretending these dirty fossil fuel projects don’t jeopardize our continued existence by accelerating the climate crisis and destroying essential habitat," Jared Margolis, an attorney at the Center for Biological Diversity, said in a news release. "Thankfully, Washington has stepped up and rejected this monstrosity.”