The new entity has been dogged by speculation of layoffs and brand cuts. 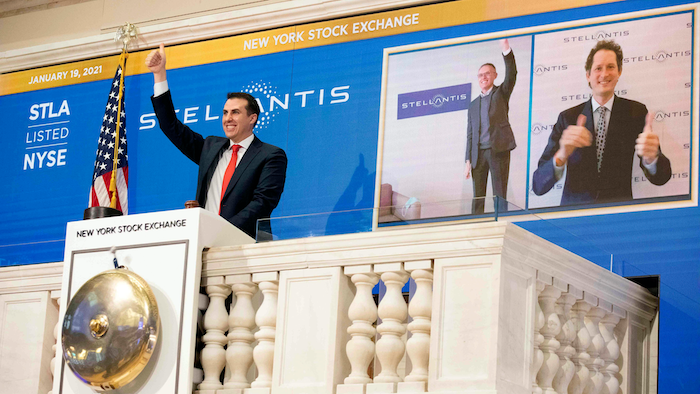 MILAN (AP) — The CEO of Stellantis, the carmaker created from the merger of PSA Peugeot and Fiat Chrysler, said Tuesday that the tie-up will help preserve jobs, factories and the 14 storied brands as billions in annual savings are achieved.

Carlos Tavares told a virtual press conference just days after Stellantis' official birth as a new company that jobs only accounted for 10 percent of manufacturing costs - and that he had "tons of other things" he can do to improve profitability.

The company plans to create synergies that save 5 billion euros ($6 billion) per year, largely through reduced manufacturing, engineering and parts purchasing costs. But Tavares was confident that brands would be boosted, factories would be filled and no jobs would be lost, at least initially.

"Our commitment on this merger is that we will not shut down plants as a consequence of the merger,'' Tavares said. He pointed out that PSA Peugeot was able to turn around the money-losing Opel and Vauxhall brands within 18 months of buying them from General Motors. "I think that there's many more things to do in our car company than just cutting costs," he said.

He said the current brands - which range from Jeep SUVs to Alfa Romeo sports cars and luxury Maserati sedans - "represent a strong asset to the company."

He said there was work to do on clarifying the brand identity, in some cases. And that the manufacturing synergies would be achieved through a system of "sister cars," unique models that share some combination of platforms and components.

He claimed that fears for job losses, including in Italy, where factories were under-utilized even before the pandemic, were unfounded.

"This merger is acting as a shield to protect the activity on the plants, rather than representing a risk for the people who may be anxious about the creation of this new entity," he said. The merger would produce greater sales, higher efficiencies and allow the launch of new models because of lower costs due to shared technology, he said.

But he also said that vehicles have to be competitive on price and quality, and if expenses get too high, profit margins will fall and other steps may have to be taken to reduce costs. "There are moments where you can't avoid it," he said.

Even though vehicles sold by Fiat are struggling in some markets, Tavares said he is confident he can make the company's brands work with technology, better quality and synergies from the larger company. He said Stellantis needs to bring newer models to Fiat. "I believe we can make those business plans fly," he said.

The PSA Group merger with Fiat Chrysler was completed on Saturday, creating the world's fourth largest car manufacturer. It is based financially in the Netherlands, with a global workforce of 400,000. The new company launched on the Paris, Milan and New York stock exchanges this week.