Jeremy Hammond is serving a 10-year sentence for breaking into the systems of security firms and law enforcement agencies. 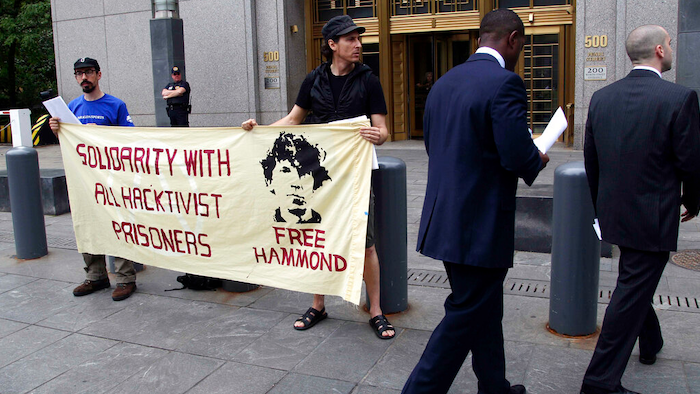 Protesters stand in front of the federal courthouse during the arraignment of hacker Jeremy Hammond, New York, May 14, 2012.
AP Photo/Seth Wenig, File

CHICAGO (AP) — Computer hacker Jeremy Hammond, who is serving a 10-year prison sentence for breaking into computer systems of security firms and law-enforcement agencies, will serve out the remainder of his term in a Chicago halfway house, a U.S. Bureau of Prison spokesman said Wednesday.

Hammond, who has gained mythic status among his supporters, was released Tuesday from the Memphis Federal Correctional Institution in Tennessee to community confinement, said Bureau of Prisons spokesman Emery Nelson. Citing privacy and security reasons, Nelson refused to release information on the conditions of Hammond’s confinement. He is scheduled for release in March.

The FBI arrested Hammond, who prosecutors called a hacking “recidivist,” during a 2012 raid on his Chicago home after getting the cooperation of Hector Xavier Monsegur, a hacker who helped law enforcement infiltrate the hacking movement ”Anonymous," which led to the conviction of eight hackers.

The raid came after Hammond penetrated the Texas-based security think tank Strategic Forecasting Inc., known as Stratfor. The company’s clients include the U.S. Department of Homeland Security and the Defense Department. He was also accused of hacking the FBI’s Virtual Academy, the Arizona Department of Public Safety, the Boston Police Patrolmen’s Association, and the Jefferson County, Alabama, Sheriff’s Office.

He’d been working with a subgroup of “Anonymous” to disrupt the networks of Sony Pictures, the Public Broadcasting Service, the Arizona Department of Public Safety and others when a member of the group enlisted him to help break into Stratfor’s systems.

The hackers posted emails between Stratfor employees and clients on the WikiLeaks website, along with credit card data from a client list that included Northrop Grumman, the Marine Corps and Time Warner Cable. They used some of the credit card numbers to donate money to the Red Cross, according to court records.

Federal prosecutors alleged the Stratfor hack resulted in more than a million dollars in losses to individuals and threatened public safety.

Hammond argued during his sentencing the hacks were civil disobedience to expose the pervasiveness of government and private surveillance.

During a 2014 interview with The Associated Press, Hammond laughed at the idea that some consider such attacks as threatening to national security as terrorism.

Hammond last year was summoned to testify to a federal grand jury in Virginia. He was found guilty of civil contempt after he refused to testify.

Raised in the Chicago suburb of Glendale Heights, Hammond described himself as a :nonconformist, anti-authority” kid who at 8, tried to design video games. A few years later, he started hacking.

He started the University of Illinois at Chicago with a full scholarship, but was kicked out after hacking into the university’s computer science department website and telling administrators about the vulnerability.

Over the years, his supporters have elevated him to near-mythical status on the internet and have sold buttons, t-shirts and other merchandise bearing his name and picture. In a Tuesday tweet, the Jeremy Hammond Support Committee expressed joy that Hammond had been released from prison.