The bill would require companies to disclose whether any of their goods or supply chain can be traced to internment camps or forced labor. 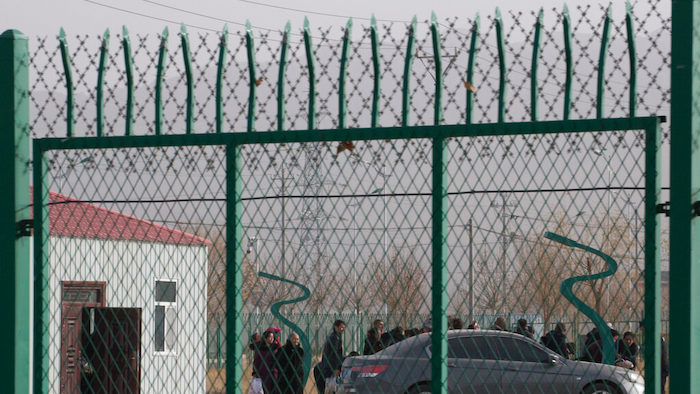 WASHINGTON (AP) — For the second time in two weeks, the House on Wednesday approved a bill aimed at cracking down on U.S. imports of goods made with the forced labor of detained ethnic minorities in China.

The bill would require publicly traded companies in the U.S. to disclose whether any of their goods — or any part of their supply chain — can be traced to internment camps or factories suspected of using forced labor of Muslim Uighurs or other ethnic minorities in China.

The bill, sponsored by Rep. Jennifer Wexton, D-Va., was approved 253-163 and now goes to the Senate.

Its passage follows approval last week of a bill aimed at barring U.S. imports of goods produced in the vast Xinjiang region of northwestern China on the presumption that they were likely made with forced labor. That bill, authored by Rep. Jim McGovern, D-Mass., was approved Sept. 22 on 406-3 vote.

If enacted into law, the two proposals could have significant ripple effects in global trade by forcing companies to avoid a region that produces 80% of the cotton in China, as well as tomatoes and manufactured goods.

Lawmakers say the measures are needed to press China to stop a campaign that has resulted in the detention of more than 1 million Uighurs and other predominantly Muslim ethnic groups under brutal conditions.

“If America does not speak out for human rights in China because of commercial interest, we lose all moral authority to speak about human rights anywhere in the world,” House Speaker Nancy Pelosi said in a floor speech last week.

Wexton, whose northern Virginia district is home to one of the largest Uighur communities in the U.S., said her bill would inform investors and markets about active exploitation occurring in one of the largest ongoing human rights violations in the world.

“For years, the government of the People's Republic of China has been engaged in the mass internment of religious minorities in the Xinjiang region,'' Wexton said. The camps supply materials for some of the largest companies in the world, "and some of these products are finding their way to U.S. consumers,'' including cellphones and T-shirts, Wexton said.

While the U.S. has long banned imports made with forced labor, traditional human rights monitoring efforts are thwarted in tightly controlled regions such as in northwestern China, Wexton and other lawmakers said. Travel to the area is restricted. Auditors have been detained and threatened, and workers intimidated, they said.

Wexton's bill directs the U.S. Securities and Exchange Commission to issue rules requiring publicly traded company to issue yearly reports disclosing imports that originate in or are sourced from Xinjiang, because of the strong likelihood they were made with forced labor.

The U.S. Chamber of Commerce opposes both House bills, arguing they would likely cause U.S. companies to cease doing business in Xinjiang altogether. That outcome would harm legitimate producers and manufacturers, because there is no effective way to inspect and audit suppliers in the region, the chamber said.

The group urged Congress to develop “targeted foreign policy tools and to work with the business community to combat these abuses.”

Lawmakers from both parties have called for penalizing China amid increasingly bitter relations between the two nations over a range of issues, including trade, espionage and the coronavirus outbreak, which started in the Chinese city of Wuhan.

Some companies and trade groups oppose a region-wide declaration because it puts the burden on private enterprises to ensure an often complex, global supply chain is free of materials that have been produced with forced labor. A non-governmental organization, the Worker Rights Consortium, says about 1 in 5 cotton garments sold in the U.S. contain content from the Uighur region.

The two House bills will likely “require some dislocation,” said Rep. Earl Blumenauer, D-Ore. “We may even pay a dime or two more for a pair of socks or a T-shirt,″ he added, but the price is worth it to avoid being complicit in “horrific oppression.″

Since 2017, more than a million people have been swept up into vast internment camps where they are subjected to re-education programs intended to force them to assimilate into the dominant Han Chinese culture.

The Chinese government has portrayed its activities in Xinjiang as part of a campaign against a violent separatist movement and bristles at criticism of what it considers an internal manner. It calls the camps vocational training centers and denies allegations by U.S. officials and human rights groups that the camps amount to modern slavery.

Earlier this month, the U.S. blocked four companies and a manufacturing facility in northwestern China from shipping their products to the U.S. because of their suspected reliance on forced labor.