The company criticized Britain’s interior minister, who has vowed to stop asylum seekers. 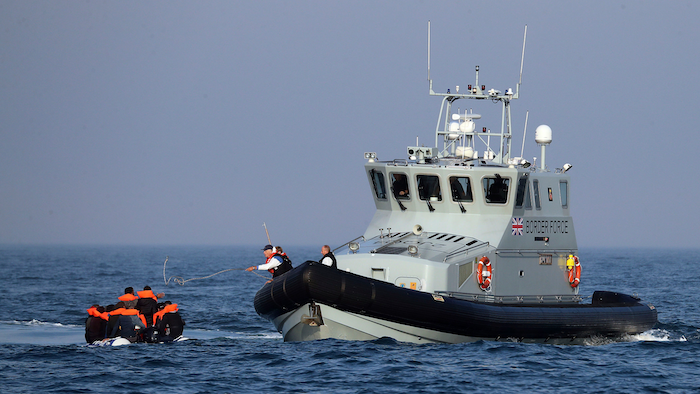 A Border Force vessel assist a group of people thought to be migrants on board from their inflatable dinghy in the Channel.
Associated Press

LONDON (AP) — Relations between the British government and ice cream maker Ben & Jerry’s chilled Wednesday in a spat over the treatment of migrants.

The feud began Tuesday when the Vermont-based dessert brand directed a tweet at Britain’s interior minister, Home Secretary Priti Patel, who has vowed to stop asylum seekers crossing the English Channel from France to England in small boats. Hundreds of people have made the dangerous crossing in the past weeks of calm summer weather.

The company tweeted: “Hey @PritiPatel we think the real crisis is our lack of humanity for people fleeing war, climate change and torture.” It followed up with a series of tweets suggesting the government speak to refugee organizations and saying that “PEOPLE CANNOT BE ILLEGAL,” in response to some politicians’ talk of “illegal” immigrants.

The Home Office hit back, saying Patel was “working day and night to bring an end to these small boat crossings” and was unconcerned about “upsetting the social media team for a brand of overpriced junk food.”

James Cleverly, a lawmaker from the governing Conservative Party, joined the criticism, tweeting: “Can I have a large scoop of statistically inaccurate virtue signalling with my grossly overpriced ice cream please.”

Founded in Burlington, Vermont in 1978 by ex-hippies Ben Cohen and Jerry Greenfield, Ben & Jerry’s has long championed liberal causes. It has been owned since 2000 by Anglo-Dutch consumer goods conglomerate Unilever PLC.