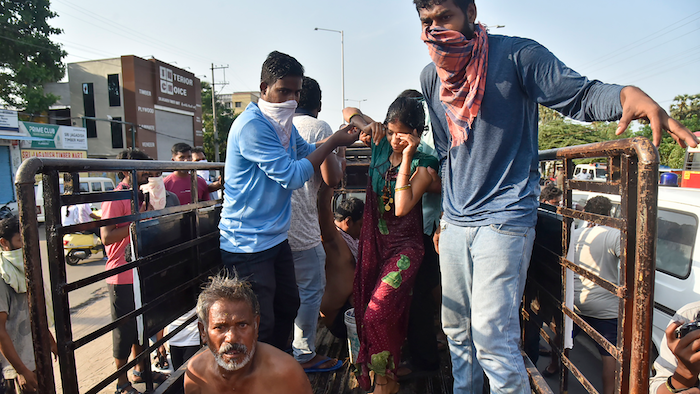 People affected by a chemical gas leak are carried out of a truck to an ambulance in Vishakhapatnam, India.
Associated Press

Authorities said the evacuation was precautionary, but it triggered panic among people overnight that another gas leak was occurring.

"No, there was not another leakage,’’ National Disaster Response Force spokesman Krishan Kumar said Friday.

Factory owner LG Chem said it asked police to evacuate residents because of concerns that rising temperatures at the plant’s gas tank could possibly cause another leak. The company said it was injecting water into the tank and applying other measures to keep temperatures under control.

A state administrator in the district, Vinay Chand, said authorities flew in chemicals from a neighboring state to neutralize the gas completely before allowing people to return to their homes.

Expert teams were checking the factory's vicinity for any aftereffects of the gas leak. Residents of five villages are waiting for a clear signal to return to their homes, Chand said.

The initial evacuations on Thursday affected about 3,000 people.

The death toll rose to 12 on Friday with one person dying in a hospital, P.V. Sudhakar, a doctor, said.

Chand said 316 people were being treated in hospitals and were in stable condition. State police chief Damodar Gautam Sawang said 800 people were released after treatment on Thursday.

The chemical styrene, used to make plastic and rubber, on Thursday leaked from the LG Polymers plant on the outskirts of the eastern coastal city of Vishakhapatnam in Andhra Pradesh state while workers were preparing to restart the facility after a coronavirus lockdown was eased.

The leak was suspected to have come from large tanks left unattended over the past six weeks.

“Our initial information is that workers were checking a gas storage tank when it started leaking,” said Industries Minister M. Goutham Reddy.

Videos and photos from the area showed dozens of people lying unconscious in the streets, arms open wide with white froth trailing from their mouths. People fled on foot, on motorbikes and in open trucks as police officers, some wearing gas masks, rushed to get people out of their homes.

The scene evoked bitter memories of the Bhopal industrial disaster in 1984 that killed at least 4,000 people and injured another 500,000, many of them with chronic health problems today, according to the government.

The blanket of gas spread about 3 kilometers (1.8 miles), sickening people in at least four villages. The leak was stopped by 8 a.m. Thursday, officials said.

A neurotoxin, styrene gas can immobilize a person within minutes of inhalation and be deadly at high concentrations.

LG Chem Ltd. is South Korea’s largest chemical company and produces a range of industrial products, including petrochemicals, plastic and batteries used in electronic vehicles. It is part of the family-owned LG Corp. conglomerate, which also has an electronics arm that globally sells smartphones, TVs and personal computers.

South Korea’s Foreign Ministry said Friday its ambassador to India had expressed regrets and condolences over the gas leak. A ministry statement said the South Korean government is closely monitoring efforts to handle the aftermath.

The bowl-shaped coastal city in Andhra Pradesh state is an industrial hub known for frequent gas leak accidents. In December 2019, a leak from a pharmaceutical company killed two people.

“We have not learnt from our past mistakes,” said E.A.S. Sarma, a former senior state official, referring to the 1984 Bhopal gas leak.

Considered the world’s worst industrial accident, the leak of methyl isocyanate at a Union Carbide India pesticide plant prompted successive Indian governments to pledge to improve safety standards. But many similar accidents, although on a smaller scale, continue.

A former employee filed a whistleblower lawsuit.
Oct 8th, 2021
Follow Us
Most Recent