President Xi Jinping publicly promised over the past week to ensure farming and other industries recover quickly. 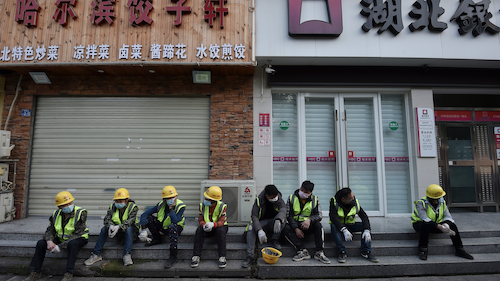 Workers take a rest near the closed restaurant and bank in Wuhan in central China's Hubei province.
Associated Press

BEIJING (AP) — China's government promised tax cuts and other aid Monday to help companies recover from its virus outbreak while a spike in new cases in Iran, Italy and South Korea raised the prospect of wider disruption to tourism and other global industries.

At a news conference, Chinese finance and planning officials expressed confidence the ruling Communist Party’s growth targets can be achieved this year despite anti-disease controls that shut down much of the world's second-largest economy last month.

President Xi Jinping publicly promised over the past week to ensure farming and other industries recover quickly. Still, forecasters say it is likely to be at least mid-March before automakers and other companies return to full production.

“We will do a good job of implementing large-scale interest rate reduction and tax deferral and ensure effective implementation as soon as possible,” said Ou.

Business activity plunged after the Lunar New Year holiday was extended to keep factories and offices closed and the government told the public not to travel. Automakers and other businesses are gradually reopening, but officials also have orders to prevent infection from spreading as millions of people return to work.

Elsewhere, a surge in reports of new cases in Iran, Italy and South Korea raised the prospect of more disruptions.

Austria halted rail traffic across its border with Italy after the country reported four deaths and 190 cases. Authorities have yet to pinpoint the source of infection.

In Iran, the ILNA news agency quoted an official in the city of Qom as saying 50 people have died from the virus there since Feb. 13. The city is a popular place of religious study for Shiites from across Iran and other countries.

Some countries have closed their borders with Iran or barred travelers from there.

Also Monday, South Korea reported 70 new cases, raising its total to 833, and two more deaths for a total of seven.

ING said in a report Monday that Asian economies could lose $105-115 billion this year in potential sales to Chinese tourists.

In China, Xi said Sunday regions deemed to be at low risk should ease disease curbs to revive business activity while high-risk regions should focus on epidemic control. The president said officials should make sure planting of spring crops in China's vast countryside isn't disrupted.

Bus and train service still is suspended in areas with millions of inhabitants, blocking people who visited their hometowns for the Lunar New Year in January from returning to work.

Asked whether Beijing planned to reduce its economic growth targets, the general secretary of the Cabinet’s planning agency, the National Development and Reform Commission, expressed confidence the virus’s impact would be brief.

The ruling party has yet to announce economic targets after 2019 growth fell to a multi-decade low of 6.1%. Forecasters expect it to be about 6% but say if the disease isn’t controlled quickly, growth could decline to as low as 5%, raising the risk of politically dangerous job losses.

“The epidemic’s impact on the economy and society is short-term and generally controllable and will not change China’s long-term positive economic fundamentals,” said the NDRC official, Cong Liang. “Economic and social development goals for 2020 can be achieved."

The annual meeting of China's ceremonial legislature, usually used to announce the growth target and other plans for the year, was postponed Monday due to the virus. It was scheduled to start March 5. No new date was announced.

Nearly 1,000 companies have received low-interest loans from a 300 billion yuan ($43 billion) recovery fund offered by the central bank, according to a People’s Bank of China official, Chen Yulu.

Cong said industrial output is rebounding, though he gave no indication when the government expects it to return to normal.

Production by companies in trade-oriented coastal areas has risen above 70% of normal, according to Cong. He said food processing, coal mining and other industries are back to at least 70%, but he gave no figures for the level of production at their lowest point during the outbreak.