In another election year, Trump has outlined a new $1 trillion plan for spending on roads, rails, water systems and other infrastructure. 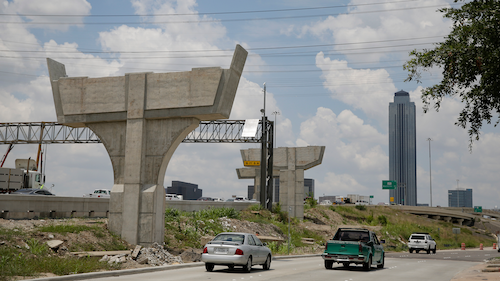 In this July 11, 2019 file photo, construction on the Interstate 69 and Interstate 610 interchange continues in Houston. In the midst of an election year, President Donald Trump has outlined a new $1 trillion infrastructure plan. This time, the Republican president is proposing to rely fully on federal spending to reach his goal, a fundamental change that is praised by some state transportation officials and industry groups, even though Trump's proposal doesn't spell out how to pay for it all.
Elizabeth Conley/Houston Chronicle via AP, File

JEFFERSON CITY, MO. (AP) — As a presidential candidate in 2016, Donald Trump promised a $1 trillion infrastructure plan that would use tax incentives to spur private investment in public works projects.

He has so far failed to persuade Congress to pass anything like that. 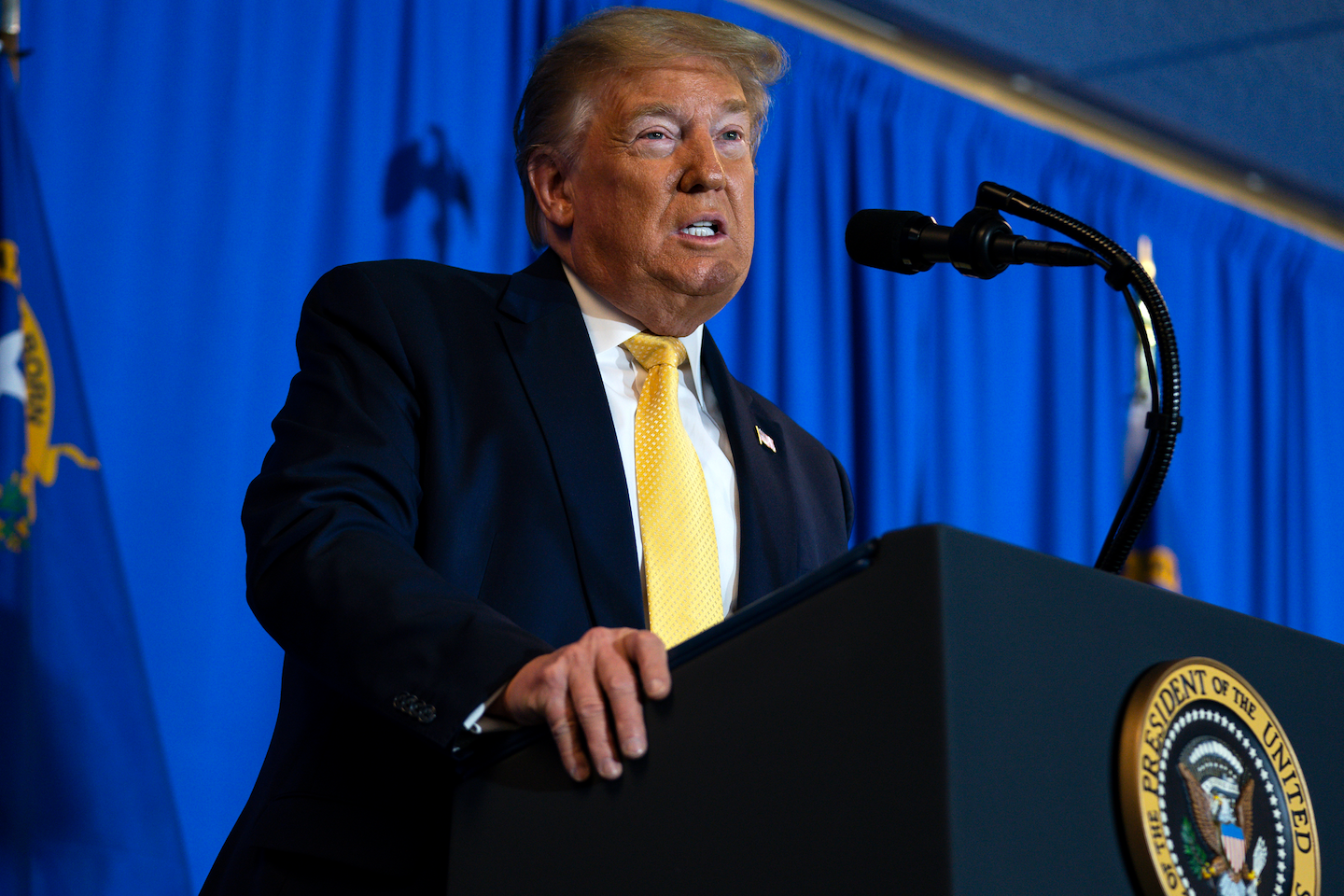 President Donald Trump delivers the commencement address at the "Hope for Prisoners" graduation ceremony, Thursday, Feb. 20, 2020, in Las Vegas.Associated PressIn another election year, Trump has outlined a new $1 trillion plan for spending on roads, rails, water systems and other infrastructure. This time, the president is proposing to rely fully on federal spending. That fundamental change from his first plan drew praise from some state transportation officials and industry groups, even though Trump doesn't spell out how to pay for it all.

Since outlining his budget proposal last week, Trump has done little to promote his new infrastructure plan. A politically divided Congress has no obligation to consider it. In fact, Trump's prior infrastructure proposals all stalled, even when Republicans controlled both the House and Senate.

Some Republicans already are lowering expectations.

“The Republican House version of the bill won't be a trillion dollars, I can tell you that right now,” said U.S. Rep. Sam Graves, the ranking GOP member of the House Transportation and Infrastructure Committee. “It will be a lot farther south than that.”

Trump's retooled infrastructure plan relies on existing fuel tax revenue to cover much of the cost. That allows him to include billions of dollars worth of projects that likely would have happened no matter who was president.

The proposal is “a fantastic development” that “would be a great shot in the arm for infrastructure improvements in this country,” said Dean Franks, head lobbyist for the American Road and Transportation Builders Association. But he added, “How to pay for it is always the big question.”

Improving the nation's infrastructure has been one of the few policy areas touted by both parties. But such talk has yet to result in action. 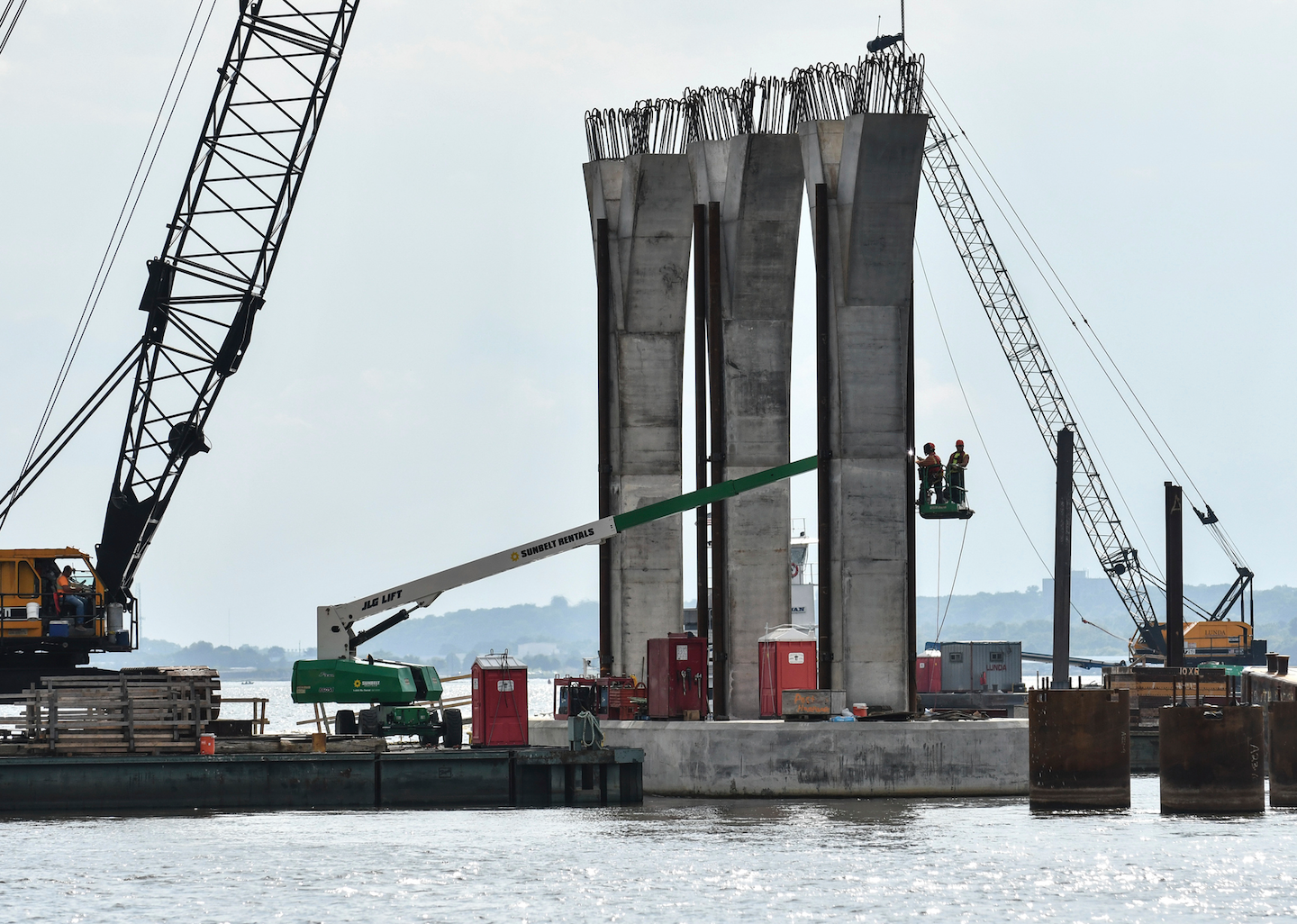 For Trump, a $1 trillion target has remained a focal point of his infrastructure plan, even as the way to pay for it has evolved.

The goal traces back to one-upmanship of former Democratic presidential candidate Hillary Clinton, who in 2016 had proposed spending and loans that she projected would generate about $500 billion for infrastructure. Asked for details about his own plan in August 2016, Trump told Fox Business: “Well, I would say at least double her numbers." When pressed on how he would pay for it, Trump replied, “We would do infrastructure bonds.”

During an October 2016 speech in Gettysburg, Pennsylvania, Trump provided new details and included infrastructure in his “100-day action plan to make American great again." He said he would leverage "public-private partnerships and private investments through tax incentives to spur $1 trillion in infrastructure investment over the next 10 years.”

As president, Trump's first two budget proposals included $200 billion in new federal funding for infrastructure that he said would generate at least $1 trillion in projects when matched with money from state and local governments or private investors. But those plans never passed a Republican-led Congress.

Some state transportation officials raised concerns about their ability to shoulder the burden, noting that Trump's plan would have flipped the traditional model — wherein the federal government covers the majority of costs for highways, bridges and public transit projects.

“There was much criticism of this administration when they kept promising a $1 trillion infrastructure plan, and the budget came out, and there was only $200 billion in actual federal money," said Jeff Davis, senior fellow at the nonprofit Eno Center for Transportation in Washington, D.C. "This year, it’s actually $1 trillion in honest-to-God spending by the United States Treasury Department."

Trump's new plan takes a more traditional Washington approach. He proposes $810 billion through a 10-year reauthorization of the surface transportation program, which provides funding for roads, bridges, rails, public transit and transportation safety programs and is set to expire at the end of September.

He adds $190 billion in one-time grants, including $60 billion for “mega-projects” that could include everything from roads to dams to high-speed internet networks. Other grants would be devoted to freight systems, bridges, public transit and rural projects. But no specific examples of potential projects are listed.

U.S. Rep. Peter DeFazio, an Oregon Democrat who chairs the House Transportation and Infrastructure Committee, said he was encouraged that Trump's budget “signals he is interested in at least talking about the need to invest in our nation’s crumbling infrastructure.”

But DeFazio touched on a potential sticking point: He said it was hard to say whether Trump “actually wants to move forward with innovative solutions that would tackle carbon pollution in the transportation sector.”

One way to fund Trump's latest plan would be to raise the federal fuel tax, which has remained unchanged since 1993, at 18.3 cents a gallon for gasoline and 24.3 cents for diesel fuel. But that has gained little traction in Congress, even though the increase has support from the U.S. Chamber of Commerce and AFL-CIO, two high-profile allies of both parties.

Trump's proposal includes no tax increase. The White House Office of Management and Budget said the administration would work with Congress to cover a $261 billion gap between highway trust fund revenue and his proposed spending. It suggested cuts could be made elsewhere in the budget to help pay for it.

Trump's plan is larger than a House Democratic plan announced in January.

His plan to pair a transportation reauthorization bill with an upfront infusion of cash for infrastructure projects is similar to a concept that then-President Barack Obama unsuccessfully proposed in 2011. Lawmakers who were reluctant to take on new spending may remain hesitant today.

“We have to be careful when it comes to increasing deficits,” said Graves, who represents a northern Missouri district that voted overwhelmingly for Trump. “We just can’t keep heaping more spending and more spending on top of what we’re already doing.”