The Trump administration has accelerated efforts to warn other countries to be wary of Chinese investment and influence. 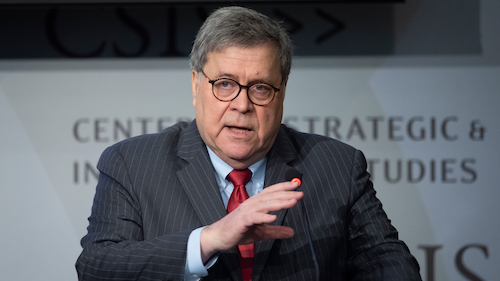 WASHINGTON (AP) — Attorney General William Barr waded into ongoing diplomatic tensions between the United States and China on Thursday, decrying what he said was Beijing's determination to establish “dominance” in the market of next-generation, high-speed wireless networks.

Barr spoke as the Trump administration has accelerated efforts to warn other countries to be wary of Chinese investment and influence. His comments echoed those of Secretary of State Mike Pompeo, who on a trip to Europe last month lobbied allies to ban Chinese tech giant Huawei from involvement in the new fifth-generation, or 5G, networks because of cybersecurity concerns.

“If China establishes sole dominance over 5G, it will be able to dominate the opportunities arising from a stunning range of emerging technologies that will be dependent on, and interwoven with, the 5G platform," Barr said.

The 5G cellular networks are designed to deliver ultrafast download speeds and transform how information and data are shared across a global economy. Huawei is the top maker of telecom infrastructure equipment, but U.S. officials have sought to prevent its involvement out of concern that it might share data with the Chinese government or be compelled to help with electronic eavesdropping. Huawei denies those claims.

“Much of the discussion on the dangers of allowing China to establish dominance in 5G has been focused on the immediate security concern of using communications networks that China can monitor and surveil. That is, in fact, a monumental danger," Barr said. “And for that reason alone, we should mobilize to surmount China's drive to dominate 5G."

Beyond that, though, is concern that Chinese dominance of the market could generate trillions of dollars in economic opportunities. As it stands, Barr said, China has captured 40% of the global 5G infrastructure market.

“For the first time in history, the United States is not leading the next technological era," Barr said.

Barr spoke at a conference centered on concerns about Chinese economic espionage and intellectual property theft.

At the event, officials unveiled Justice Department figures showing a sharp rise in the number of China-related arrests, corresponding with what the U.S. government sees as an urgent threat to American economic prosperity and intellectual property, federal law enforcement officials said.

There were 24 China-related arrests in the last fiscal year, up from 15 five years earlier, and there have been 19 to date in the current fiscal year, the Justice Department said.

Officials described law enforcement and intelligence efforts to counter China's targeting of corporate trade secrets and academic research, including defense information, software for wind turbines and high-end medical technology. In recent years, U.S. officials say, China has relied not only on hacking to steal information but also on recruitment of scientists and other individuals.

“The long-term existential threat to the security of our nation is real," said Bill Evanina, the U.S. government's top counterintelligence executive.

An email sent to the Chinese Embassy seeking comment was not returned on Thursday.

The U.S. officials highlighted a series of prosecutions over the last year that they say underscore the threat, including the recent arrest of a hospital researcher in Boston accused of attempting to smuggle biological material from a laboratory to China.

Last week, the Justice Department announced charges against the chairman of Harvard University's chemistry department, accusing him of misleading U.S. authorities about funding he received from China and about his participation in a talent recruitment program tied to the Chinese government.

That case prompted consternation on college campuses about whether it was illegal for researchers to collaborate with counterparts in other countries, said U.S. Attorney Andrew Lelling, the top federal prosecutor in Massachusetts, whose office brought the case.

The answer is no, Lelling said, but it is against the law to lie to the U.S. about that collaboration.

“The upshot here is that on university campuses, what we have seen is that cases like this have generated a need for better guidelines for academia," Lelling said.

The Justice Department in 2018 created what it calls the China Initiative to focus attention on the espionage threat, though officials stressed Thursday that the scrutiny was aimed not at individual Chinese citizens but rather at those suspected of stealing from America on Beijing's behalf.

Not all the targets, including the arrested Harvard professor, are Chinese, either, the officials said.