The company is being accused of stalling, in order to have federal agencies override denials from state agencies. 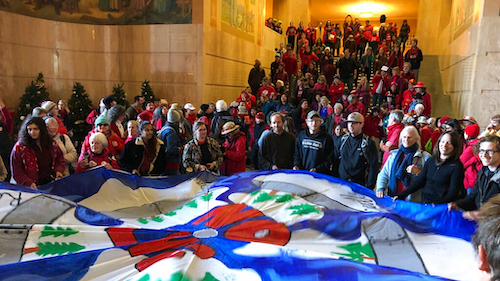 In this Nov. 21, 2019, file photo, demonstrators against a proposed liquid-natural gas pipeline and export terminal in Oregon flooded into the State Capitol in Salem, Ore., to demand Democratic Gov. Kate Brown stand against the proposal.
AP Photo/Andrew Selsky, File

SALEM, Ore. (AP) — A Canadian energy company has withdrawn its application for a state permit for a controversial natural gas pipeline and export terminal in Oregon, and a project spokesman said Friday it is instead awaiting possible federal approval.

Two Oregon state lawmakers on Friday accused the Jordan Cove Energy Project of stalling in order to have the Trump administration, which has embraced the mega-project, approve it in an attempt to override all denials from Oregon state agencies.

The Oregon Department of State Lands had been expected to deny a permit for the project on Jan. 31. State Lands Director Vicki Walker this week refused a request by Jordan Cove to extend a Jan. 31 deadline, saying the department had already agreed to numerous deadline extensions .

Jordan Cove, which is a project of Pembina, an energy company based in Calgary, Canada, responded by telling Walker in a letter Thursday that it was immediately withdrawing its application for a removal-fill permit, needed to dredge sediment out of Coos Bay for the marine export terminal, and to construct a pipeline through and under waterways in southern Oregon.

The proposed natural gas terminal and a 230-mile (370-kilometer) feeder pipeline would permit shipment of natural gas from the United States and Canada to Asia and create local jobs. Opponents say it would ruin habitat and that the increased use of a fossil fuel would contribute to global warming.

“The applicant’s behavior over the last year ... suggests to us that they are not significantly focused on gaining necessary approval from state agencies. It appears that they are counting instead on approval of their broader application to the Federal Energy Regulatory Commission,” Sen. Jeff Golden, a Democrat from the Rogue Valley, and Rep. Pam Marsh, a Democrat from Ashland, said in a letter to Walker.

Paul Vogel, a spokesman for Jordan Cove, said in an email that it is awaiting a final determination by the Federal Energy Regulatory Commission on Feb. 13, "at which time we will determine our path forward.”

Opponents are vowing to resist the project. Protesters occupied Democratic Gov. Kate Brown's office in November, demanding she oppose the pipeline project. She refused, and 21 protesters were arrested for trespassing. A prosecutor declined to file charges.

Brown, a Democrat, did share a letter with the protesters that she sent to the U.S. Environmental Protection Agency a month earlier in which she opposed the federal agency's attempts to remove the state’s authority in the permitting process.

The Trump administration in August proposed streamlining approval of gas pipelines and other energy projects by limiting states’ certification authorities under the Clean Water Act.

It appears the administration already anticipates the project will go forward. Secretary of Commerce Wilbur Ross said this month, after an agency under his jurisdiction said Jordan Cove won't jeopardize protected species, that the opinion "will pave the way for more American jobs and vastly expanded exports of domestically sourced liquified natural gas to prized Asian markets.”

Nathan Matthews, an attorney for the Sierra Club, one of several environmental groups opposed to the project, insisted there is no path forward for Jordan Cove without state approval.

“This proposal has been stalled for years because it would be a disaster for Oregon's communities and waterways,” Matthews said in an email. “Today it's more obvious than ever that Pembina should just give up on the project altogether.”