Hundreds of UNFI workers ended a week-long strike at multiple locations late Wednesday after the company agreed to resume talks with their union. 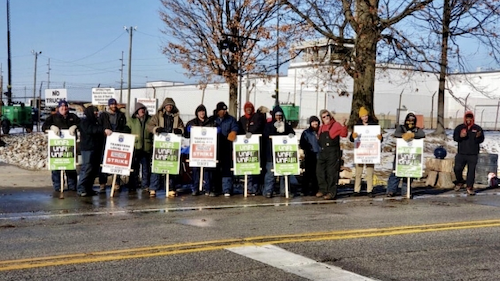 The Minneapolis Star-Tribune reports that hundreds of United Natural Foods Inc. (UNFI) workers ended a week-long strike at multiple locations late Wednesday after the company agreed to resume talks with their union.

The Star-Tribune said talks between UNFI and Teamsters will resume Thursday at a factory in Fort Wayne, IN.

UNFI and Teamsters 414 in Fort Wayne have been negotiating a new three-year contract to replace a contract that expired in September. UNFI union workers have been working without a contract since, and since July for some.

Teamsters drivers, warehouse and maintenance workers in Fort Wayne went on strike Dec. 12, and were joined Tuesday by many more in Hopkins, MN and Ashwaubenon, WI. UNFI’s Hopkins plant is one of its biggest, staffing more than 700 employees as a key supplier to more than 100 grocery stores in Minnesota.

Local news reports said the strike included 158 Teamsters employees from UNFI’s Fort Wayne distribution center and 120 in Hopkins. A Teamsters press release said that more than 1,000 total workers have been affected by the ongoing labor dispute and backed the strike.

"After they agreed to meet, I pulled down the picket lines," Teamsters Local 414 officer George Gerdes told the Star-Tribune Wednesday. "Our goal was to get them back to the table in good-faith bargaining."

According to Teamsters, UNFI is the largest wholesale distributor to natural and organic retailers in the US and Canada, becoming America’s second-largest grocery wholesaler after its October 2018 acquisition of SUPERVALU. The Union said that since the acquisition, UNFI stock has lost more than 80 percent of its value, adding that Whole Foods/Amazon is now UNFI’s largest customer at 21 percent of the company’s total 2019 revenues.

UNFI had the following statement Wednesday:

"We hope to have our associates return to work in the very near-term," UNFI said in a statement. "We're also committed to return to the bargaining table in Fort Wayne and work in good faith with Teamsters Local 414 to reach a new labor agreement.

We appreciate our customers' patience during this and also thank our facility managers, supervisors and colleagues from around the country who came together to help ensure our customers continued to receive their shipments from us during this disruption."