Why Many Experts Missed This: Cheap Oil Can Hurt U.S. Economy

Despite their savings at the gas pump, consumers have slowed rather than increased their spending. 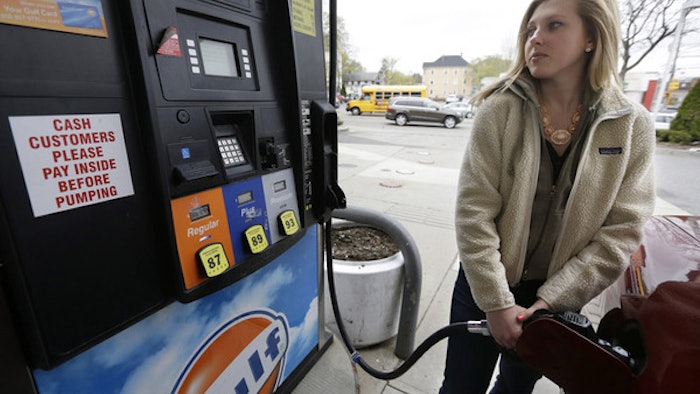 WASHINGTON (AP) — If there was one thing most economists agreed on at the start of the year, it was this: Plunging oil prices would boost the U.S. economy.

It hasn't worked out that way.

The economy is thought to have shrunk in the January-March quarter and may barely grow for the first half of 2015 — thanks in part to sharp cuts in energy drilling. And despite their savings at the gas pump, consumers have slowed rather than increased their spending.

At $2.74 a gallon, the average price of gas nationwide is nearly $1 lower than it was a year ago. In January, the average briefly reached $2.03, the lowest in five years.

Cheaper oil and gas had been expected to turbocharge spending and drive growth, more than making up for any economic damage caused by cutbacks in the U.S. oil patch.

Consider what Federal Reserve Chair Janet Yellen said in December: Lower gas prices, Yellen declared, are "certainly good for families. ... It's like a tax cut that boosts their spending power."

Other experts were more direct: "Lower oil prices are an unambiguous plus for the U.S. economy," Chris Lafakis, an economist at Moody's Analytics, wrote in January.

So what did they get wrong?

It turns out that the economic effects of lower energy prices have evolved since the Great Recession. Corporate spending on drill rigs, steel piping for wells and railcars to transport oil has become an increasingly vital driver of economic growth. So when oil prices fall and energy companies retrench, the economy suffers.

The drilling boom that erupted in 2008 has boosted U.S. oil production nearly 75 percent and natural gas 30 percent and made the United States the world's largest combined producer of oil and natural gas. Energy production contributes about 2 percent to economic output, up from less than 1 percent in 2000.

Yet in recent months, industry activity has dropped more sharply than predicted.

"So far, it is fair to say that we have been hurt more than helped," Lafakis acknowledges now.

During their policy meeting last month, Fed officials grappled with the changing impact of cheaper oil, according to minutes of the meeting released Wednesday. Several policymakers said the economic drag from drilling cutbacks could be "larger and longer-lasting than previously anticipated."

They also worried that the weakness in consumer spending, despite cheaper gas, suggested that Americans might generally be more reluctant to spend than assumed.

Some economists are reconsidering assumptions they use to forecast the economy.

"The benefit of lower oil prices is less pronounced than, say, 10 years ago," says Jim Burkhard, a researcher at IHS Energy. "You're taking a big engine of economic activity and cutting it sharply."

Lafakis and many others still expect consumers to spend much of their savings from cheaper gas, powering faster growth in the second half of the year. Economists say it can take up to six months for people to spend unexpected windfalls. But any gains won't likely be enough to counter the anemic start to the year.

Moody's Analytics expects the economy to expand just 2.6 percent this year, down from an earlier forecast of 3.3 percent. (The downgrade is also due in part to a stronger U.S. dollar, which has depressed exports.)

For families, the drop in gas prices was an unexpected gift. The government has estimated that cheaper gas will save a typical household $675 this year.

Yet still scarred by the recession, many remain reluctant to spend freely. Analysts also note that Americans are less likely to spend extra money if they think the gain is temporary.

"Consumers have been very reluctant to spend (savings from cheaper gas), because they view that as fleeting," says Greg McBride, chief financial analyst at Bankrate.com.

Consumer spending rose at an annual rate of just 1.9 percent in the first quarter, compared with the previous quarter's 4.4 percent. Much of the cash saved at the gas pump was put away: The U.S. savings rate reached its highest point in more than two years. Wal-Mart and Target have confirmed that their sales aren't getting much lift from cheaper gas.

"The extra money that I have, I save," Cimilluca says.

For the economy, the technological breakthroughs that allowed the energy industry to power growth now help explain the slowdown. As the 2008-09 recession ended, companies used hydraulic fracturing, or fracking, to unlock underground reserves. Oil, at $100 a barrel or more, made such efforts profitable.

Jim Burkhard of IHS Energy estimates that U.S. and Canadian energy companies increased investment in production from $98 billion in 2005 to $363 billion last year. U.S. oil and gas jobs nearly doubled to 537,000. In addition, jobs were added at steel mills, at sand pits to process sand for fracking and at restaurants and service companies in areas with new-found oil and gas fields, like North Dakota and Pennsylvania.

But the industry's breakneck growth was thrown into reverse by a 50 percent drop in oil prices from June through January. CEO Doug Suttles of Encana Corp., a Canadian-based driller that operates in the United States, says the pullback in drilling "happened more rapidly than I've seen in 32 years."

As recently as December, Suttles says, experts had forecast that the number of rigs would drop by a third in the spring from a year earlier. Instead, it's plunged by more than half, according to Baker Hughes, an oilfield services firm.

That's led companies like U.S. Steel to temporarily close factories that make the steel pipe used in oil wells. Texas-based Superior Silica Sands, which makes fracking sand, has canceled the building of a factory and has slashed capital spending plans.

Investment in wells and production facilities collapsed nearly 50 percent last quarter, the government says, and cut the quarter's annual economic growth by three-quarters of a percentage point. Goldman Sachs estimates that three jobs will be lost in other industries for every position shed by energy companies as laid-off workers spend less.

That trend is painfully evident in Texas, which lost 25,400 jobs in March, the most since 2009. Many were in mining, which includes oil and gas. But most of the losses were indirect: As laid-off workers cut spending, retailers cut 6,600 jobs.

Cheaper gas has hardly been a comfort to Orlando Garza, 34, who lives near Corpus Christi, Texas, and was laid off from his job in February as a well site leader.

AP Writers Emily Schmall in Fort Worth, Texas and Jon Fahey and Anne D'Innocenzio in New York contributed to this report.