The team behind a Swiss-made solar-powered aircraft that is attempting to fly around the world said Tuesday the clean-energy plane will stop in India, China and the United States in a historic journey set to begin as early as next month. 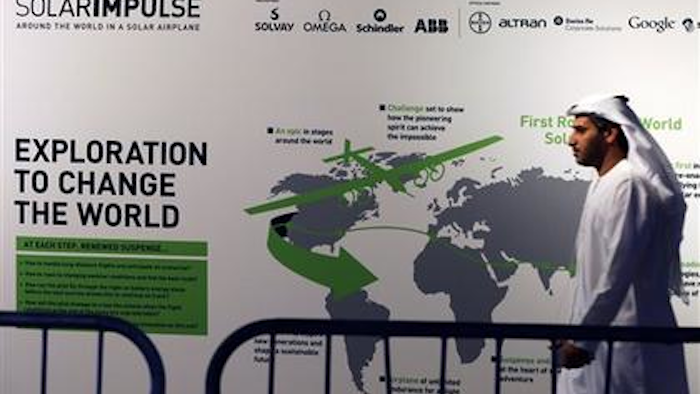 Abu Dhabi, United Arab Emirates — The team behind a Swiss-made solar-powered aircraft that is attempting to fly around the world said Tuesday the clean-energy plane will stop in India, China and the United States in a historic journey set to begin as early as next month.

The lightweight Solar Impulse 2, a larger version of a single-seat prototype that first flew five years ago, is aiming to become the first plane ever to circumnavigate the globe using only the power of the sun to drive its four propellers.

Project founders and pilots Bertrand Piccard and Andre Borschberg plan to start and finish their round-the-world bid from Abu Dhabi, the oil-rich capital of the United Arab Emirates, over the course of about five months.

They laid out their planned route for the first time Tuesday at a private jet airport in Abu Dhabi where the plane is being housed.

The first leg will be a short hop to the Omani capital, Muscat, then across the Arabian Sea to Ahmedabad and Varanasi in India. From there, it's on to Mandalay, Myanmar, and Chongqing and Nanjing in China.

The pilots will then head across the vast Pacific Ocean, bound for Hawaii. Next it's on to Phoenix and New York's biggest airport, John F. Kennedy International. The path across the Atlantic will depend on the weather, and could include a stop in Southern Europe or Morocco before the team makes its final push to Abu Dhabi.

There is only one seat in the plane, so the layovers will give the pilots a chance to swap places and engage with local communities along the way.

"It's a little difficult to switch in the air, which means we will make some stopovers," Piccard quipped.

Some legs of the trip, such as over the Pacific and Atlantic Oceans, could mean five or six straight days of flying.

Borschberg predicted the plane would begin its journey from Abu Dhabi around February 27 to March 1.

The Emirates, one of OPEC's largest oil exporters, has invested heavily in recent years in green energy projects and is home to the International Renewable Energy Agency. It is building an environmentally sustainable model city on the outskirts of Abu Dhabi and is developing large-scale solar projects to tap the power of the Arabian sun.

Masdar, the Abu Dhabi government's clean-energy company, is one of the sponsors of the Solar Impulse 2 project.

Piccard said the company is "generous" and is providing various services to the crew but is not paying them outright. "They don't give us money to be here. They don't buy us," he said.

The Emirates minister of state and Masdar chairman, Sultan al-Jaber, would not say how much the Emirates is contributing to the project. He described his country's role as a science and technology partner that can tap its relationships around the world to help make the journey a success.

"It is a very clear demonstration of our common vision, our shared interests and our commitment to helping advance such promising, sophisticated new technologies," he told The Associated Press.

The Solar Impulse 2 was unveiled in April last year. Its backers say it theoretically can stay airborne indefinitely by soaking up sunlight using some 17,200 solar cells arrayed on wings that span 72 meters (236 feet).

It made a 2 hour and 17 minute inaugural flight above western Switzerland in June.