The leaked oil triggered two huge blasts, one of them tearing up concrete along a city road in Qingdao. Photos posted online showed ripped slabs of pavement, bodies, overturned vehicles and shattered windows in nearby buildings. Black smoke rose above gigantic fuel silos and darkened much of the sky. 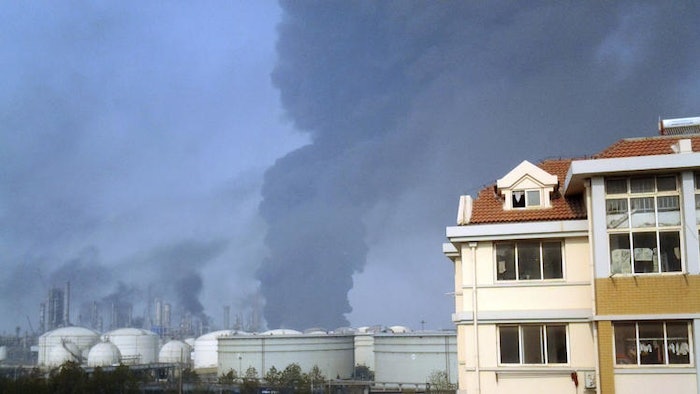 BEIJING (AP) -- Leaked oil from a ruptured pipeline in an eastern Chinese port city exploded Friday, killing at least 35 people, injuring 166 and contaminating the sea in one the country's worst industrial accidents of the year, authorities said.

The leaked oil triggered two huge blasts, one of them tearing up concrete along a city road in Qingdao. Photos posted online showed ripped slabs of pavement, bodies, overturned vehicles and shattered windows in nearby buildings. Black smoke rose above gigantic fuel silos and darkened much of the sky.

The pipeline owned by China's largest oil refiner, Sinopec, ruptured early Friday and leaked for about 15 minutes onto a street and into the sea before it was shut off. Hours later, as workers cleaned up the spill, the oil caught fire and exploded in two locations, the city government said.

The Beijing News cited a resident surnamed Gao, who works in logistics, as saying he was driving past Qingdao's Huangdao district when he felt the force of the blasts, and then realized the ground in front of him had fractured. The air was pungent, many cars on both sides of the road were overturned and there was dark smoke rising in the distance, he said.

"It felt like an earthquake, and I was dumbstruck," Gao said, adding that there was chaos on the street as people ran, panicking, in all directions.

Authorities ruled out terrorism but the incident remained under investigation, it said.

President Xi Jinping urged local officials to go all out in finding missing people, treating the injured and in finding the cause of the accident, state TV broadcaster CCTV said.

Calls to Sinopec's headquarters in Beijing were not immediately answered, but a statement online offered condolences to victims. "We will investigate the incident with responsibility and give timely reports," Sinopec said.

The Qingdao Environmental Protection Bureau said barriers had been set up to contain the oil as it spread into the sea, but that a mixture of gas and oil from a storm sewer exploded and caught fire over the sea.

Authorities said the oil had seeped into underground utility pipes, which could have been a factor in the blasts, but they did not elaborate. They assured the public that the explosions did not affect any petrochemical plant or military facilities in the seaside district and that air quality remained good after the disaster.

The accident is likely to add to growing concerns among the members of the Chinese public about safety and environmental risks that come with oil pipeline projects.

It was China's third deadliest industrial accident this year, behind a chicken factory fire in June in Jilin that killed 121 and a mining accident in March, also in Jilin, that killed 36.