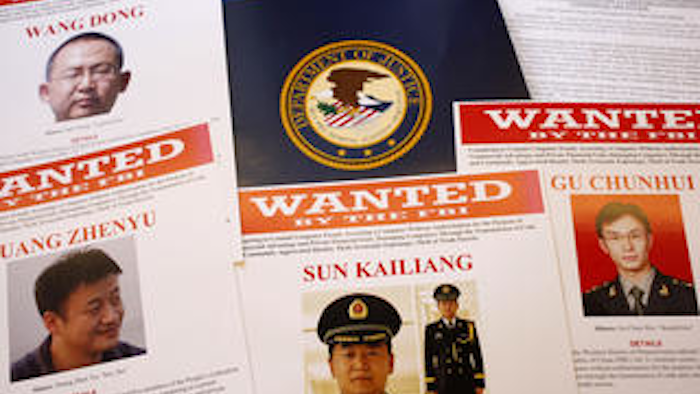 The charges have been described as unprecedented and dramatize a long-time Obama administration goal to prosecute state-sponsored cyber threats.

"In sum, the alleged hacking appears to have been conducted for no other reason than to advantage state-owned companies and other interests in China at the expense of businesses here in the United States," Holder told a news conference at the Justice Department. "This is a tactic that the United States government categorically denounces."

Said Bob Anderson Jr., executive assistant director of the FBI's criminal, cyber response and services division: "This is the new normal. This is what you're going to see on a recurring basis."

U.S. officials have previously asserted that China's army and China-based hackers had launched attacks on American industrial and military targets, often to steal secrets or intellectual property. China has said that it faces a major threat from hackers, and the country's military is believed to be among the biggest targets of the NSA and U.S. Cyber Command.

"It is our hope that the Chinese government will respect our criminal justice system," Holder said.

The indictment will put a greater strain on the U.S.-China relationship.

In recent months, Washington has been increasingly critical of what it describes as provocative Chinese actions in pursuit of territorial claims in disputed seas in East Asia. For its part, Beijing complains that the Obama administration's attempt to redirect its foreign policy toward Asia after a decade of war in the Middle East is emboldening China's neighbors and causing tension.

White House spokesman Ben Rhodes said at the time that Obama had addressed concerns about cyber threats emanating from China. He said Obama told Xi the U.S. sees it not through the prism of security but out of concern over theft of trade secrets.

In late March, Defense Secretary Chuck Hagel revealed that the Pentagon planned to more than triple its cybersecurity staff in the next few years to defend against Internet attacks that threaten national security.