A federal judge ruled that the National Labor Relations Board can require most private businesses to put up posters telling workers they have a legal right to form a union. 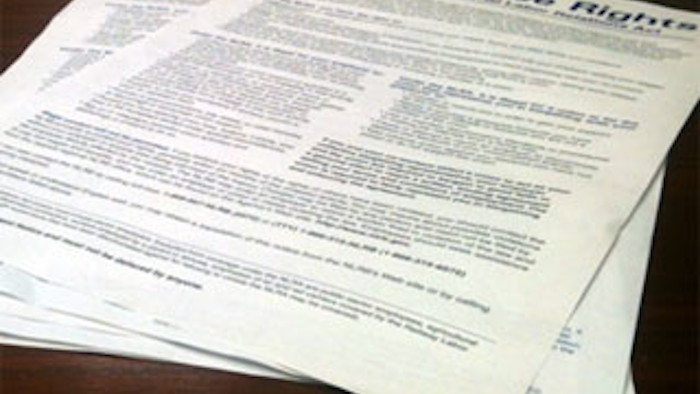 WASHINGTON (AP) — A federal judge ruled Friday that the National Labor Relations Board can require most private businesses to put up posters telling workers they have a legal right to form a union.

But U.S. District Judge Amy Berman Jackson limited how the board can enforce the requirement. She said simply failing to display the new NLRB poster isn't automatically a legal violation without other evidence of anti-union conduct.

The ruling pleased labor groups but disappointed business groups, which argued the new poster is too one-sided and seems to encourage workers to join unions. The posters, to be displayed effective April 30, explain workers' rights to bargain collectively, distribute union literature and engage in other union activities without fear of reprisal. They also explain that workers have a right not to join a union.

NLRB Chairman Mark Pearce said the decision means workers will have "meaningful awareness of their rights and protections under federal labor law."

In a separate ruling, Berman Jackson declined to consider a challenge to President Barack Obama's recess appointment of three labor board members in January. Business groups had argued the appointments were unconstitutional, saying the Senate was not technically in recess when Obama acted.

Berman Jackson said the issue was not relevant in this case because the NLRB had already approved the new posters before Obama appointed the new members.

"We are concerned that this decision will encourage frivolous lawsuits by unions against small business owners who refuse to comply," said Karen Harned, an executive director of the National Federation of Independent Business, which challenged the poster rule.

Harned said she expects her group and others to appeal. The U.S. Chamber of Commerce and National Association of Manufacturers also challenged the poster requirement in court.

Despite the judge's limit on enforcement, the decision is seen as a victory for unions. Labor leaders believe the posters could discourage the practice in some companies of intimidating workers who want to organize a union.

AFL-CIO general counsel Lynn Rhinehart said she is satisfied that the board "has ample authority to enforce the notice-posting requirement on a case-by-case basis."

In her ruling, Berman Jackson said the board was reasonable in concluding that many workers — including recent immigrants, high school students and other employees in nonunion workplaces — are unaware of their legal right to form unions or engage in collective bargaining.

"The notice-posting rule is a reasonable means of promoting awareness," she said.

The judge also rejected business group arguments that requiring the posters compels employers to speak against their will in violation of free speech rights under the First Amendment to the Constitution.

She said the poster was simply a message from the government about what is required under the law. Similar government posters explaining federal anti-discrimination laws and workplace safety rules are already fixtures in company break rooms.

"Nothing in the notice posting suggests that employers favor collective bargaining activities, and nothing in the regulation restricts what the employers may say about the board's policies," she said.

The labor board wanted to make failing to put up the posters an automatic unfair labor practice. But Berman Jackson rejected that part of the rule, saying the board must make a specific finding based on the facts and circumstances of each case before finding that failure to display the posters interfered with workers' rights.