Letter To The Editor: OMG...It's A Tesla

I have a Tesla Roadster, which I have had for four years and which has 75,000 miles on it. My impressions: Compared to the various other sports cars I have owned – Porsche, RX-7, 3000 – the car has far better acceleration and has instant response to the throttle pedal compared to the lag and roughness of all gas engine cars. 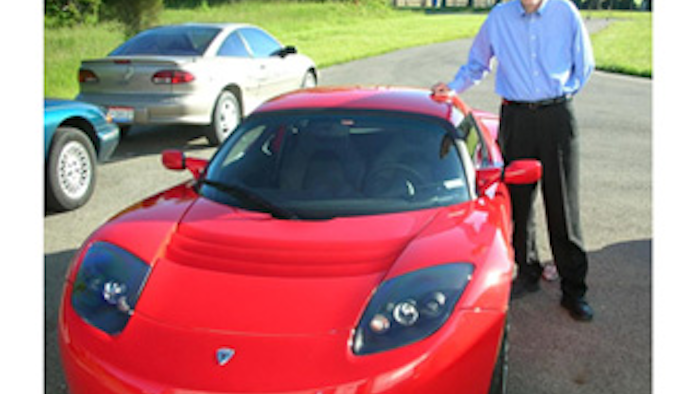 A blog from June 6, titled “OMG…It’s A Tesla” painted the Tesla Model S as the most popular zero-emission electric vehicle on the market today, despite being unaffordable and inaccessible. In response, Stuart Koford, president of Koford Engineering LLC, penned this letter to the editor about his Tesla experience:

I saw your article on Tesla and decided to take advantage of your invitation to comment.

I have a Tesla Roadster, which I have had for four years and which has 75,000 miles on it. My impressions: Compared to the various other sports cars I have owned – Porsche, RX-7, 3000 – the car has far better acceleration and has instant response to the throttle pedal compared to the lag and roughness of all gas engine cars. In spite of the rocketship acceleration, it is smoother to pull into a parking space or in bumper to bumper traffic than an economy car; the handling and road feel is outstanding; the steering is precise; the seats are very comfortable, and it has a great sound system. Oh, and with all-weather tires installed, it is great in snow aided by the 67 percent of the weight on the rear drive wheels. Being rear wheel drive, as any true performance/luxury car should be, it doesn't have any of the annoying torque steer, and understeer/plowing in snow that front wheel drive cars have. On a hill, there is even more weight on the drive wheels, unlike with front wheel drive cars. (Yes, I have owned several front wheel drive cars).

It has 240 miles of range, which is more then I could ever use in a sports car. There is no need for public charging. I just plug it in everyday when I park in my garage. It takes five seconds, much quicker than driving out of my way to a gas station and filling up – also no need to be out in the rain and cold.

I haven't included the cost of oil and spark plugs for the Ferrari. The electric motor will probably last a few hundred thousand miles. By then, the Ferrari will have probably gone though a few engines. The life of the batteries is the question of course. So far, I have about 98 percent of the original range. The battery consists of a steel card cage with electronic cards and replaceable battery cards. The entire battery doesn't need to be replaced if something goes wrong – just the individual parts. With lithium batteries, what happens is not that the battery stops working one day, but rather that the range starts to drop. Usually the “life” is defined as the point where you reach 80 percent of the initial range.

However if you start with 240 miles, then you could probably live with less then 80 percent. Lithium batteries are used for applications such as electric moters where they have been found to last for more then 35 years (so far). On the new Model S, if you buy the top of the line battery option, you get a battery with a lifetime warrantee.

I would also point out that the Model S provides higher performance then any competitive sedan from Porsche, Mercedes, or BMW, but costs the same or less BEFORE tax credits, and fuel or maintenance savings. I see that in the first quarter, Tesla outsold Mercedes, BMW, and Porsche in the four-door sedan price range that the Model S sells in (U.S. sales).

The Tesla SUV/crossover is planed for next year, and also the new model Roadster. And a low end luxury car after that. The Model S is only just starting to ship outside of the U.S.

You mentioned a few electric car start-ups that have failed. These failed because, outside of the electric drive train, they were not good cars. Fisker did not have enough funding to carry them through with enough time to get the car fully debugged, and there were a long list of instrument panel bugs that caused the cars to stop running. The car ran well but had no interior space and had a short all electric range. The Leaf is selling well but is very ugly and has short range. If they put a gas engine in it, it wouldn't sell better. The Volt has short electric range and not very good mileage when running in gas mode. One of the cars that you mentioned that failed to get off of the ground was actually a three-wheeled motorcycle with no safety provisions.

I see electric cars as ideal for sports and luxury cars. High acceleration and quiet operation is what people pay a premium for in these cars. Sport and luxury cars are the ones getting 10-20 mpg and if you are concerned about reducing gas usage, it is the place where the most savings are. There isn't much oil savings in putting batteries in an econobox that is already getting 30-40 mpg.

To charge up an electric car, you need a garage, which the owners of econoboxes might not have.

Public charging is useful if you want to drive your Model S from LA to New York, but realistically, wouldn't you fly instead?

I bought my car because it offered performance beyond anything else I could buy in that price range. Not using imported oil was just a side benefit. (The electricity the car uses is from a solar panel on my roof).

What do you think? Feel free to comment below.

A Practical Guide to Financial Modeling and Projections

Financial models and projections have become increasingly crucial. As companies become more aware of the various risks that could have a dramatic impact on their operations and revenue. Download our new ebook.
Oct 1st, 2021