Consumer Prices Accelerate Most in 39 Years 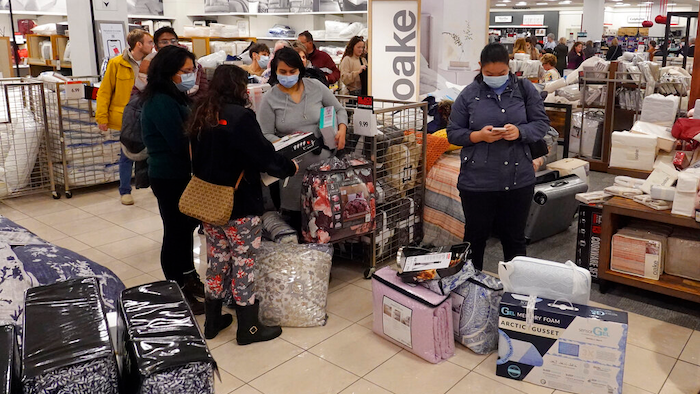 Customers wait in line to checkout during a Black Friday sale at Macy's on Nov. 26, 2021, in Indianapolis.
AP Photo/Darron Cummings

WASHINGTON (AP) — U.S. consumer prices rose 5.7% over the past year, the fastest pace in 39 years, as a surge in inflation confronts Americans with the holiday shopping season under way.

The November increase, reported Thursday by the Commerce Department, followed a 5.1% rise for the 12 months ending in October, continuing a string of annual price gains that have run well above the 2% inflation target set by the Federal Reserve.

Consumer spending, which accounts for 70% of U.S. economic activity, rose 0.6% in November, a solid gain but below the 1.4% surge in October.

“Consumers spent with less enthusiasm in November as they shifted their holiday shopping to earlier in the season and continued to contend with escalating prices and reduced product availability,” said Kathy Bostjancic, chief U.S. financial economist at Oxford Economics.

Personal incomes, which provide the fuel for future spending increases, rose 0.4% in November, slightly lower than the 0.5% increase in October. Both gains came after a 1% plunge in incomes in September, the month that government benefit programs such as expanded unemployment benefits came to an end.

The big jump in the Commerce Department's price gauge was similar to the rise in the consumer price index, up 6.8% for the 12 months ending in November, also the biggest surge by this measurement in 39 years.

While the CPI is the better known price gauge, the Federal Reserve prefers to follow the Commerce Department's personal consumption expenditures price index in setting its interest-rate policies to fight inflation. The PCE price index tracks the actual purchases consumers are making each month while the CPI follows a fixed market basket of goods.

For the month of November, the PCE price index rose 0.6%, slightly lower than the 0.7% monthly gain in October. Core inflation, which excludes volatile energy and food prices, rose 0.5% in November. Core inflation has risen 4.7% over the past 12 months. That is the fastest pace for the core reading since a 5.1% rise in the 12 months ending in September 1983.

Republicans contend that the sizable gains in inflation are evidence that President Joe Biden’s economic policies are not working and are actually harming Americans whose incomes are not keeping up with rising prices.

The administration, however, points to the nation's rapid re-opening following a pandemic-triggered recession, an economic event that is unprecedented in our lifetimes.

Suppliers have been unable to keep up with demand, pushing prices up sharply and clogging the nation's ports with goods that can't be unloaded fast enough.

The Federal Reserve last week announced that it was accelerating the pace of change to fighting inflation pressures with an expectation that it could raise interest rates next year by possibly three times to slow growth and keep inflation from getting out of hand.

While the Fed has stopped calling the inflation increase transitory, Biden administration officials continue to insist that the price surge being seen now will start to fade next year as supply chain problems get resolved. They noted that energy prices including the cost of gasoline have already started to fall.

The government reported Wednesday that the overall economy, as measured by the gross domestic product, grew at an annual rate of 2.3% in the July-September quarter, up from a previous estimate of a slightly slower 2.1% gain.

Economists are expecting more rapid growth perhaps as high as 7% in the current quarter although some analysts are saying that rebound could be jeopardized if the new COVID omicron variant keeps spreading and triggers another shutdown of the economy.