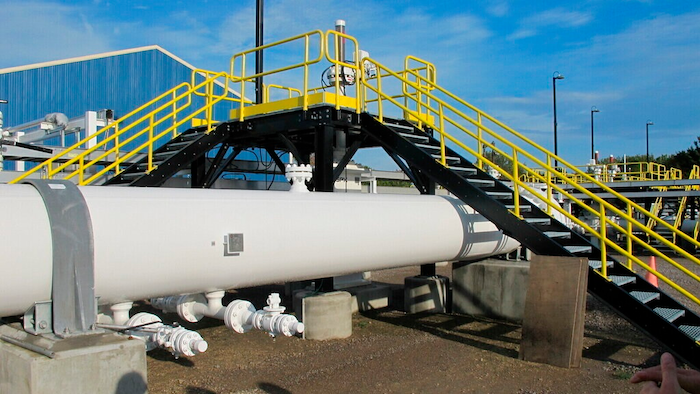 In this October 2016, file photo, is an aboveground section of Enbridge's Line 5 at the Mackinaw City, Mich., pump station. Michigan Gov. Gretchen Whitmer is threatening to go after Enbridge's profits from a Great Lakes oil pipeline if it isn't shut down. The Democratic governor issued the warning Tuesday, May 11, 2021, in a letter to Enbridge, a Canadian oil transport company.
AP Photo/John Flesher, File

LANSING, Mich. (AP) — Michigan Gov. Gretchen Whitmer threatened Tuesday to go after Enbridge's profits from a Great Lakes oil pipeline if the company defies her order to shut it down.

The Democratic governor issued the warning in a letter to the Canadian energy transport company on the eve of a state-imposed deadline to halt operation of Line 5, which moves oil through northern Wisconsin and Michigan to refineries in Ontario. Enbridge repeated its intention to defy Whitmer's demand.

A nearly 4-mile-long (6.4-kilometer-long) section of Line 5 divides into two pipes that cross the bottom of the Straits of Mackinac, which connects Lake Michigan and Lake Huron.

Whitmer, backed by environmentalists and native tribes, says the segment is vulnerable to a catastrophic spill in the cold, swirling channel. She revoked an easement last November that Michigan had granted in 1953 for the pipes to occupy the lake bottom and ordered them closed by May 12.

Enbridge insists the segment is in good condition and says its loss would cause economic damage in both countries, a position shared by the Canadian government, which filed a legal brief Tuesday in support of the company.

In her letter to Vern Yu, Enbridge's executive vice president for liquids pipelines, Whitmer said continued operation of the line after Wednesday “constitutes an intentional trespass" and that the company would do so “at its own risk.”

“If the state prevails in the underlying litigation, Enbridge will face the prospect of having to disgorge to the state all profits it derives from its wrongful use of the easement lands following that date,” Whitmer said.

Enbridge argues that the state has no authority to order the shutdown because the federal Pipeline and Hazardous Materials Safety Administration oversees interstate pipelines.

“We will not stop operating the pipeline unless we are ordered by a court or our regulator, which we view as highly unlikely,” spokesman Ryan Duffy said. "Line 5 is operating safely, reliably and is in compliance with the law.”

Michigan Attorney General Dana Nessel filed a lawsuit last fall in support of Whitmer's order, while Enbridge countersued in federal court and wants the matter decided there. A federal judge is considering which court should have jurisdiction.

Nessel’s office said it will continue seeking a shutdown order.

“We are reviewing other remedies that may be available to the state if Enbridge continues to operate the pipelines after the deadline,” spokeswoman Lynsey Mukomel said.

Advocacy groups stepped up the pressure.

In Lansing, labor organizers spread 1,200 hard hats across the grounds of the Michigan Capitol, saying they represented jobs that would be lost without the pipeline. Among them were members of a union representing workers at a refinery in Toledo, Ohio.

“If Line 5 were to shut down, we don’t have alternatives to get our crude oil to the refinery because of where we are and the infrastructure that we have,” said Justin Donley, president of Local 912. "So our refinery would likely shut down.”

The Consumer Energy Alliance, a business coalition, said a shutdown would imperil 33,000 jobs and cause at least $20.8 billion in economic losses in Michigan, Ohio, Indiana and Pennsylvania. Environmentalists said a spill in the straits would be far more costly.

“The decrepit, deteriorating and dangerous Line 5 pipeline is an ecological and public health tragedy waiting to happen in the world’s largest freshwater lakes,” said Collin O’Mara, president and CEO of the National Wildlife Federation.

The Bay Mills Indian Community, which has treaty-recognized fishing rights in the Straits of Mackinac, approved a resolution Monday that “banishes” the underwater pipelines from its territory.

“Enbridge’s continued harm to our treaty rights, our environment, our history, our citizens, and our culture, is a prime example of how banishment should be used,” said Whitney Gravelle, president of the tribe's Executive Council. “Banishment is a permanent and final action that is used to protect all that we hold dear.”

Enbridge is seeking state and federal permits to drill a $500 million tunnel beneath the straits to house a new pipeline, which supporters say would remove any threat of a leak. Opponents say the project carries its own environmental risks.