Experts can't recall this ever happening in the canal's 150-year history. 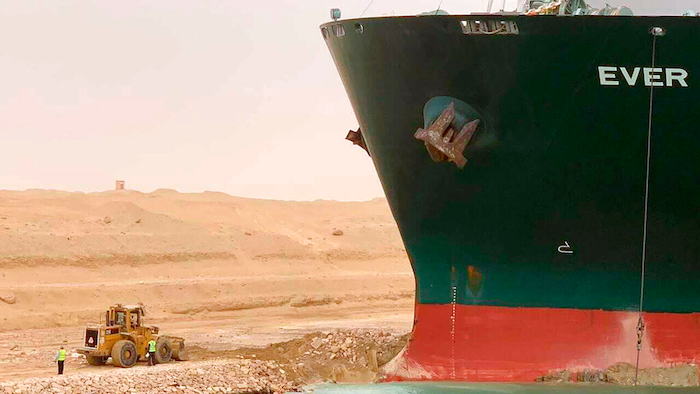 The Ever Given, a Panama-flagged ship that carries cargo between Asia and Europe, ran aground Tuesday in the narrow, man-made canal dividing continental Africa from the Sinai Peninsula. Images showed the ship's bow was touching the eastern wall, while its stern looked lodged against the western wall — an extraordinary event that experts said they had never heard of happening before in the canal's 150-year history.

Tugboats strained Wednesday to try to nudge the obstruction out of the way as ships hoping to enter the waterway began lining up in the Mediterranean and Red Seas. But it remained unclear when the route, through which around 10% of world trade flows and which is particularly crucial for the transport of oil, would reopen. One official warned it could take at least two days. In the meantime, there were concerns that idling ships could become targets for attacks. 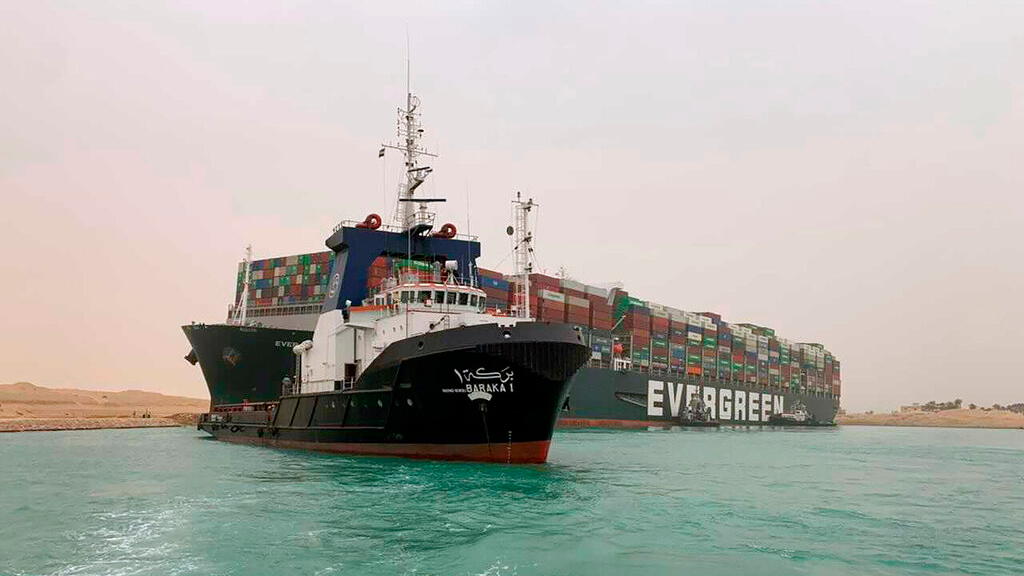 A boat navigates Egypt’s Suez Canal in front of the grounded Ever Green, March 24, 2021.Suez Canal Authority via AP

“The Suez Canal will not spare any efforts to ensure the restoration of navigation and to serve the movement of global trade,” vowed Lt. Gen. Ossama Rabei, head of the Suez Canal Authority.

Bernhard Schulte Shipmanagement, which manages the Ever Given, said all 20 members of the crew were safe and that there had been "no reports of injuries or pollution.”

The refloating operation was temporarily suspended late Wednesday and will be resumed early Thursday, according to canal service provider Leth Agencies.

It wasn't immediately clear what caused the ship to become wedged on Tuesday morning. GAC, a global shipping and logistics company, said the ship had experienced a blackout without elaborating.

Bernhard Schulte, however, denied the ship ever lost power.

Evergreen Marine Corp., a major Taiwan-based shipping company that operates the ship, said in a statement that the Ever Given had been overcome by strong winds as it entered the canal from the Red Sea but none of its containers had sunk.

An Egyptian official, who spoke to The Associated Press on condition of anonymity because he wasn't authorized to brief journalists, similarly blamed a strong wind. Egyptian forecasters said high winds and a sandstorm plagued the area Tuesday, with winds gusting as much as 50 kph (30 mph).

However, it remained unclear how winds of that speed alone would have been able to push a fully laden vessel weighing some 220,000 tons.

Tuesday marked the second major crash involving the Ever Given in recent years. In 2019, the cargo ship ran into a small ferry moored on the Elbe river in the German port city of Hamburg. Authorities at the time blamed strong wind for the collision, which severely damaged the ferry. 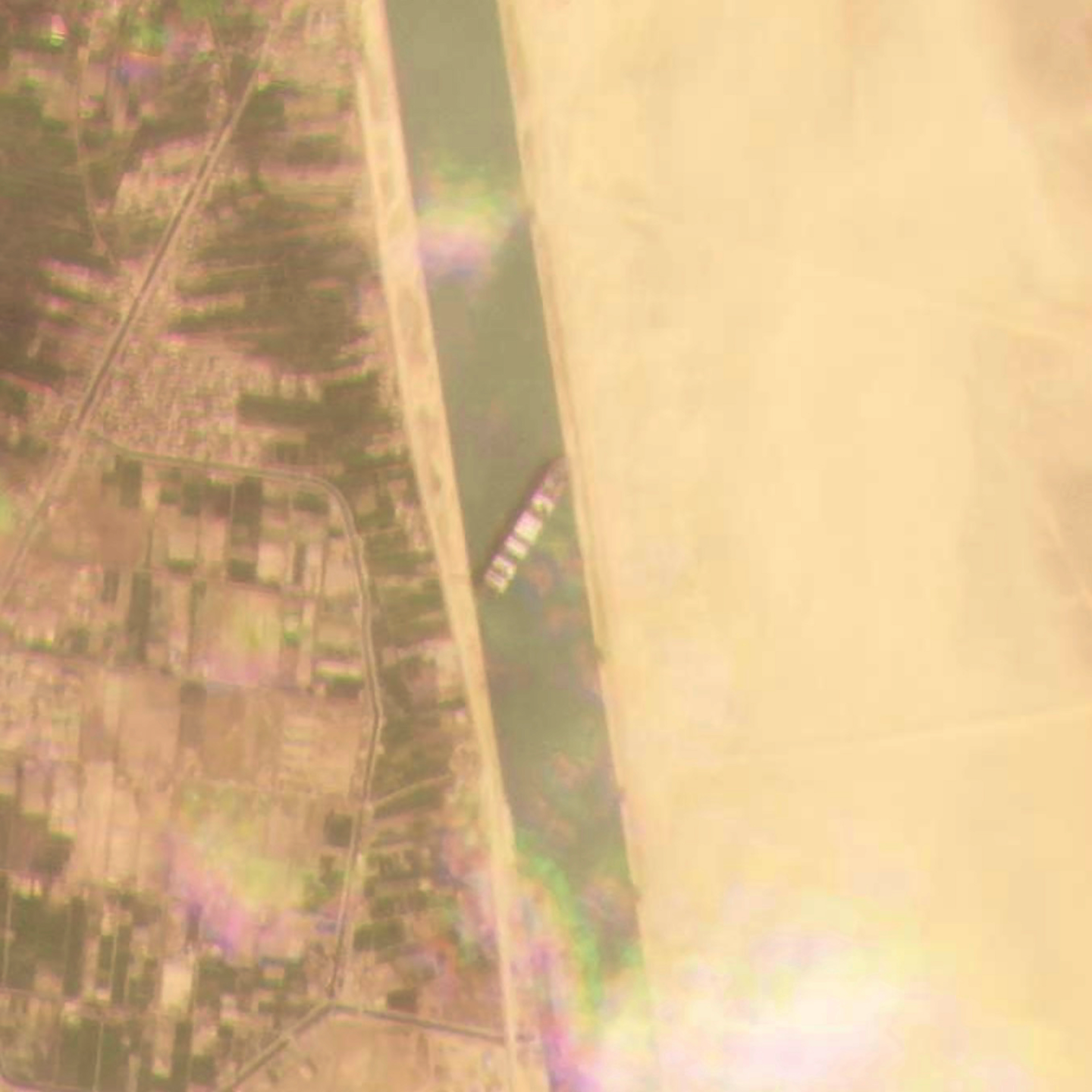 Satellite image of the MV Ever Given stuck in the Suez Canal near Suez, Egypt, March 23, 2021.Planet Labs Inc. via APA pilot from Egypt’s canal authority typically boards a ship to guide it through the waterway, though the ship's captain retains ultimate authority over the vessel, said Ranjith Raja, a lead analyst at the data firm Refinitiv. The vessel entered the canal some 45 minutes before it became stuck, moving at 12.8 knots (about 24 kph, 15 mph) just before the crash, he said.

An image posted to Instagram by a user on another waiting cargo ship appeared to show the Ever Given wedged across the canal as shown in satellite images and data. A backhoe appeared to be digging into the sand bank under its bow in an effort to free it.

The Egyptian official said tugboats hoped to refloat the ship and that the operation would take at least two days. The ship ran aground some 6 kilometers (3.7 miles) north of the southernly mouth of the canal near the city of Suez, an area of the canal that's a single lane.

That could have a major knock-on effect for global shipping moving between the Mediterranean Sea and the Red Sea, warned Salvatore R. Mercogliano, a former merchant mariner and associate professor of history at North Carolina’s Campbell University.

“Every day, 50 vessels on average go through that canal, so the closing of the canal means no vessels are transiting north and south,” Mercogliano told the AP. "Every day the canal is closed ... container ships and tankers are not delivering food, fuel and manufactured goods to Europe and goods are not being exported from Europe to the Far East.”

Already, some 30 vessels waited at Egypt's Great Bitter Lake midway on the canal, while some 40 idled in the Mediterranean near Port Said and another 30 at Suez in the Red Sea, according to Leth Agencies. That included seven vessels carrying some 5 million barrels of crude oil, Refinitiv said.

In addition to the economic implications, security experts warned that idling ships in the Red Sea could be targets after a series of attacks against shipping in the Mideast amid tensions between Iran and the U.S.

“All vessels should consider adopting a heightened posture of alertness if forced to remain static within the Red Sea or Gulf of Aden,” warned private marine intelligence firm Dryad Global.

The closure also could affect oil and gas shipments to Europe from the Mideast. The price of international benchmark Brent crude jumped nearly 2.9% to $62.52 a barrel Wednesday.

The Ever Given, built in 2018 with a length of nearly 400 meters (a quarter mile) and a width of 59 meters (193 feet), is among the largest cargo ships in the world. It can carry some 20,000 containers at a time. It previously had been at ports in China before heading toward Rotterdam in the Netherlands.

Opened in 1869, the Suez Canal provides a crucial link for oil, natural gas and cargo. It also remains one of Egypt’s top foreign currency earners. In 2015, the government of President Abdel-Fattah el-Sissi completed a major expansion of the canal, allowing it to accommodate the world’s largest vessels. However, the Ever Given ran aground south of that new portion of the canal.

The stranding Tuesday marks just the latest to affect mariners amid the pandemic. Hundreds of thousands have been stuck aboard vessels due to the pandemic. Meanwhile, demands on shipping have increased, adding to the pressure on tired sailors, Mercogliano said.

“It’s because of the breakneck pace of global shipping right now and shipping is on a very tight schedule,” he said. "Add to it that mariners have not been able to get on and off vessels because of COVID restrictions.”