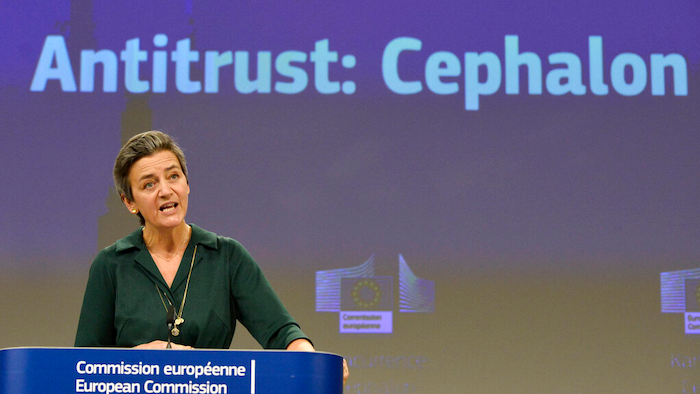 BRUSSELS (AP) — The European Union has fined two pharmaceutical companies for colluding to keep a cheap alternative to a sleep disorder medicine off the market for their profit and at the expense of patients.

EU antitrust commissioner, Margrethe Vestager, said that Teva pharmaceuticals and Cephalon, a company it later acquired, must pay 60.5 million euros ($72 million) for agreeing between themselves to delay for years the launch of Teva's cheaper version of Cephalon's blockbuster Modafinil. In return for the delay, Teva got beneficial side deals and some payments.

Modafinil treats excessive daytime sleepiness and under the brand name Provigil it accounted for more than 40% of Cephalon's turnover. A cheap alternative would have had a serious impact on the company, and the EU argued that Cephalon enticed Teva in 2005 to stay out of its market. In 2011, Teva acquired Cephalon.

Teva said in a statement that it maintained its innocence. “We continue to believe the modafinil patent settlement agreement did not infringe EU competition law in relation to the principles" laid out by the EU's court of justice. “We are planning to file an appeal."