A $300-a-week federal jobless benefit from the Trump administration is running out just weeks after it began. 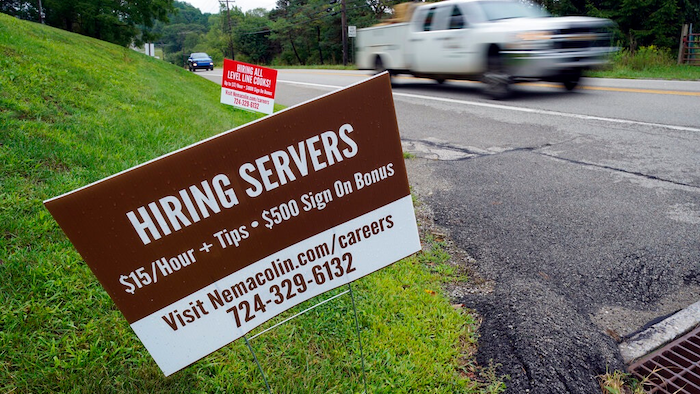 In this Wednesday, Sept. 2, 2020, file photo help wanted signs for servers and cooks at Nemacolin Woodlands Resort and Spa are displayed along route 40 at the entrance to the resort in Farmington, Pa. U.S. employers advertised more jobs but hired fewer workers in July, sending mixed signals about a job market in the wake of the coronavirus outbreak. The Labor Department said Wednesday, Sept. 9, 2020, that the number of U.S. job postings on the last day of July rose to 6.6 million from 6 million at the end of June.
AP Photo/Gene J. Puskar, File

WASHINGTON (AP) — The nation's unemployment safety net is looking increasingly shaky, with a $300-a-week federal jobless benefit from the Trump administration running out just weeks after it began and millions of laid-off Americans nearing an end to their state unemployment aid.

Most Americans who exhaust their state's unemployment benefits — typically after six months — will transition to an emergency federal program that provides an additional 13 weeks of aid. Yet they still face a looming deadline: By year's end, nearly all the federal unemployment supports will expire. Unless Congress extends those programs, millions of jobless Americans could be cut off.

Their struggles come against the backdrop of an ailing job market with 13 million unemployed people and the pace of layoffs still elevated six months after the viral pandemic flattened the economy. Applications for unemployment benefits first spiked in the week of March 21, when they reached 3.3 million, then more than doubled the next week to a record 6.9 million. That means that anyone who began receiving state unemployment benefits then will have to shift to an emergency federal program in the coming weeks.

Separately, a spokesman for the Federal Emergency Management Agency, which is administering the $300-a-week federal benefit, said Thursday that the agency is providing money to cover six weeks, from the start of August through the end of this week, with no extension in sight.

Nearly all states have applied for the $300-a-week benefit. But only 17 have managed to upgrade their computers systems to actually distribute the payments. As a result, while many states will likely issue checks for several weeks, the money will be retroactive to early August and will cover only through mid-September.

Trump’s $300-a-week jobless aid program was created by an executive order last month after a more generous version adopted by Congress expired and Trump and Congress failed to reach agreement on a new aid package.

Through July, people out of work amid the coronavirus pandemic were receiving $600 a week in federal aid on top of their state unemployment benefits. For many recipients, the $600 federal check exceeded their state benefits and kept them afloat as the economy crumbled. But Republicans in Congress opposed the $600, arguing that it was so high as to discourage many of the unemployed from looking for a job.

On Thursday, Senate Democrats blocked legislation that would have extended the extra $300 payment and provided more money for schools. The Democrats favored restoring the full $600-a-week jobless benefit as well as more money for states, localities and small businesses.

Also Thursday, the Labor Department reported that applications for unemployment aid were unchanged last week at 884,000, and the number of laid-off workers who applied for aid under a separate program for the self-employed and contract workers increased. The figures indicated that companies are still cutting an unusually large number of jobs.

Other recent evidence also suggests that the job market’s improvement may be weakening after solid gains through spring and most of summer. The number of people seeking jobless aid each week still far exceeds the number who did so in any week on record before this year.

Hiring has slowed since June, and a rising number of laid-off workers now say they regard their job loss as permanent. The number of people who are continuing to receive state unemployment benefits rose last week, after five weeks of declines, to 13.4 million, evidence that employers aren’t hiring enough to offset layoffs.

For those who have run out of state unemployment benefits, the next step will be to transition to a federal program known as Pandemic Emergency Unemployment Compensation, or PEUC. It's among the alphabet soup of additional supports that were established by the $2 trillion aid package that Congress approved this spring. The emergency program lasts for 13 weeks and is now paying benefits to 1.4 million people.

One of them is Mike Walsh, who lives in Orlando, and is receiving PEUC because Florida's state unemployment benefits last only 12 weeks. Along with North Carolina, that's the fewest number of weeks provided by any state.

Before the pandemic, Walsh, 53, worked as a transportation manager for conventions and gatherings in Orlando and around the country. If a trade group brought 40,000 of its members to Orlando for an annual convention, Walsh would coordinate the buses needed to shuttle them from dozens of hotels to the convention center and theme parks. He traveled to Washington, D.C. to manage 2,200 buses that arrived for President Barack Obama's inaugural in 2009.

Walsh doesn't know when the convention business, where he has worked for 33 years, will return. Yet that might not be until next spring, likely long after his unemployment checks will have run out. His current $244 payment and savings are covering his expenses for now, but he doesn't want to run through all his savings. If his money runs too low he'll take any job.

“I'll be the one standing at the door, telling you, ‘Welcome to Walmart,' " he said.

If the PEUC program expires, unemployed workers can then apply for what's called Extended Benefits, which lasts from 13 to 20 weeks in most states, though only six weeks in Florida. Extended Benefits kick in when a state's unemployment rate crosses a specific threshold. All states are currently paying these benefits, which is providing checks to 241,000 people.

Then there is the Pandemic Unemployment Assistance program, or PUA. It is a new source of support set up by the government's relief package and is now providing aid to 14.6 million of the unemployed, more than the regular state programs are covering. Its coverage lasts for 39 weeks.

But not necessarily for those who have been laid off more recently. On Dec. 31, the PEUC and PUA will expire. That will leave only state benefits and the Extended Benefits programs. With unemployment likely to remain high until then, many of the jobless could be left desperate.

“There will still be a need for unemployment benefits then,” said Elizabeth Pancotti, a policy analyst at Employ America, an advocacy group.