The company's facilities in Italy, where the outbreak has been particularly severe, have already shut down. 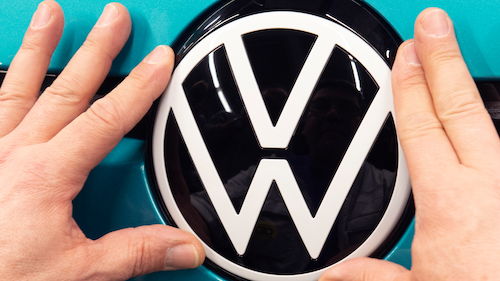 A worker completes an electric car ID.3 body at the assembly line during a press tour at the plant of the German manufacturer Volkswagen AG (VW) in Zwickau, eastern Germany, Tuesday, Feb. 25, 2020.
Associated Press

FRANKFURT, Germany (AP) — Volkswagen said Tuesday it would close most of its European plants for two weeks due to uncertainty about demand for cars and supplies of parts amid the virus outbreak and said it wasn't possible to give a reliable outlook for this year's profits.

The company said, however, that its China business, a pillar of the company's earnings, was coming back as the number of new cases lessens there and that its ambitious plans to scale up production of electric cars remained on track.

CEO Herbert Diess made the factory closing announcement at the start of the company's annual news conference. The dpa news agency, citing employee representatives, said that the last shifts would run this Friday in most locations. The company's facilities in Italy, where the outbreak has been particularly severe, have already shut down.

Diess said that in China “sales are increasing and the showrooms are open" after the severe lockdown imposed by Chinese authorities appears to have slowed the epidemic.

During a conference call with analysts Diess was asked about prospects for the Chinese market this year. He said that "China shows that this crisis can be managed if you are tough on the disciplinary measures and focused on re-launching the economy. I think it's too early to judge how we're going to end up in China, but if it can be contained in this first quarter and then we get back to normal again, then I think China is not yet lost for this year.”

“So many people have discussed the huge exposure of Volkswagen to China as a risk. I think it's an opportunity because I am quite confident about China.”

The company had previously said it expects a 4% increase in sales this year but Chief Financial Officer Frank Witter said Tuesday that uncertainty about the severity and duration of the virus outbreak made it impossible to give a reliable prediction. Diess said 2020 would be “a very difficult year” as the virus outbreak “presents us with unknown challenges.”

He said the company still intended to achieve its ambitious rollout of the ID.3, a mass-market electric compact being produced in Zwickau, Germany, that should hit the market this summer. Diess said that production expectations of 100,000 vehicles in Zwickau would still be met. The car is key to the company's efforts to meet tough new European Union limits on emissions of carbon dioxide, the primary greenhouse gas blamed for global warming. “We are standing by our electrification plan,” Diess said.

Lost Your Job? What Now?

Workers who have lost their jobs or income through no fault of their own should immediately file a claim for unemployment.
Sarah Skidmore Sell
Christopher Rugaber
Apr 3rd, 2020

The complaint alleges that Altria agreed not to compete against Juul in return for the $13 billion stake in the company.
Matthew Perrone
Apr 3rd, 2020

The FFCRA reimburses private US employers that have fewer than 500 employees with tax credits for the cost of providing paid leave related to COVID-19.
U.S. Department of Labor
Apr 2nd, 2020

It was determined that a contamination issue with the medications poses a greater risk than previously thought.
Matthew Perrone
Apr 2nd, 2020

The Commerce Department said Thursday that the gap between what the U.S. buys and what it sells abroad dropped 12.2%.
Paul Wiseman
Apr 2nd, 2020

Can You Fix Ventilators?

California had a bunch of broken ones, and the governor had asked if San Jose-based Bloom Energy could repair them so coronavirus patients could breathe.
Adam Beam
Apr 2nd, 2020

Toyota and BYD “determined that there is much we can learn from one another’s expertise,” the companies said in a statement.
Associated Press
Apr 2nd, 2020

US, World Mfg. Contracted in March

Economists had expected a bigger drop in the US manufacturing index but predict it will signal more weakness in April.
Apr 1st, 2020

When racing came to a stop March 13 amid the coronavirus pandemic, a handful of NASCAR engineers wondered if the printers could be used to address the shortage.
Jenna Fryer
Apr 1st, 2020

The Struggle of Quarantine Without Internet

Although efforts to extend broadband service have made progress in recent years, tens of millions of people are still left out.
Tali Arbel
Michael Casey
Apr 1st, 2020