Boeing Gets $2.1B for Tanker Production

The company is assembling the aircraft at its Washington-based facility. 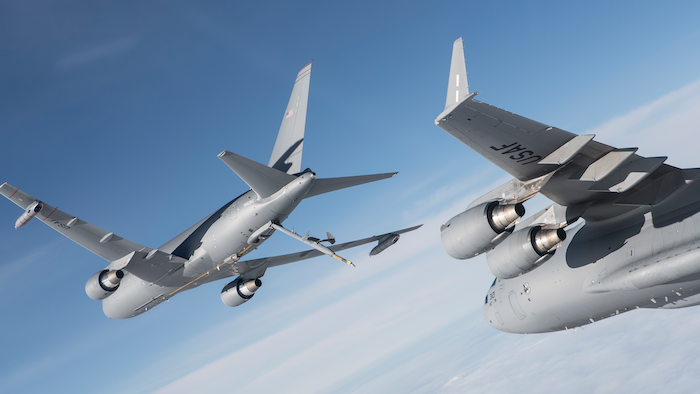 The KC-46A is a multirole tanker that can refuel allied and coalition military aircraft and also carry passengers, cargo and patients.
Boeing

This order is the third low-rate initial production lot for Boeing. The first two came in August 2016 and included seven and 12 planes, respectively, as well as spare parts.

Boeing plans to build 179 of the 767-based refueling aircraft for the Air Force to replace its legacy tanker fleet. Tanker deliveries will begin later this year.

Boeing received an initial contract in 2011 to design and develop the Air Force’s next-generation tanker aircraft. As part of that contract, Boeing built four test aircraft – two configured as 767-2Cs and two as KC-46A tankers. Those test aircraft, along with the first production plane, have completed nearly 1,500 flight hours to date.

The KC-46A is a multirole tanker that can refuel all allied and coalition military aircraft compatible with international aerial refueling procedures and can carry passengers, cargo and patients.

Boeing is assembling KC-46 aircraft at its Everett, Wash., facility.

Army Drones Made in 24 Hours

The company needs to make more vehicle frames for light- and heavyweight trucks.
Jan 11th, 2021
Follow Us
Most Recent