A federal appeals court On Tuesday temporarily blocked the National Labor Relations Board from making millions of businesses put up posters informing workers of their right to form a union. 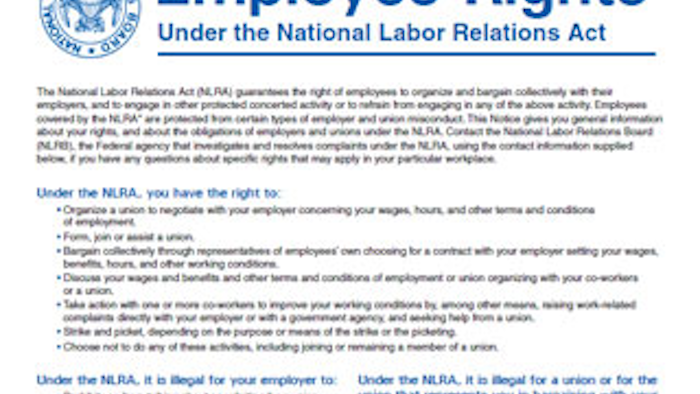 WASHINGTON (AP) — A federal appeals court On Tuesday temporarily blocked the National Labor Relations Board from making millions of businesses put up posters informing workers of their right to form a union.

The rule requiring most private employers to display the posters was supposed to take effect on April 30, but the U.S. Court of Appeals for the District of Columbia said that can't happen until legal questions are resolved.

The temporary injunction followed a federal judge's ruling in South Carolina last week that the labor board exceeded congressional authority when it approved the poster requirement in 2011. A federal judge in Washington had previously found the NLRB rule acceptable, but limited how the agency could enforce it.

Business groups have complained the posters are an unfair government effort to promote union organizing. The labor board contends the posters help workers more clearly understand their rights and protections under federal labor law.

"The 'posting requirement' is an unprecedented attempt by the board to assert power and authority it does not possess," Timmons said.

NLRB spokeswoman Nancy Cleeland did not immediately respond to a request for comment.

The NLRB rule requires more than 6 million businesses to post an 11-by-17-inch notice in a prominent location explaining the right of workers to join a union and bargain collectively to improve wages and working conditions. The posters also explain that workers have a right not to join a union and that it is illegal for union officials to coerce employees into unionizing.

NLRB attorneys argued the board has the authority to require posters even without specific congressional approval.