Electric car maker CODA Holdings Inc. filed for bankruptcy protection Wednesday after selling just 100 cars and said it plans to quit the auto business altogether. The Los Angeles-based parent of CODA Automotive filed for bankruptcy protection in federal court in Delaware. A consortium of debtors plans to acquire CODA for $25 million, according to a company statement. 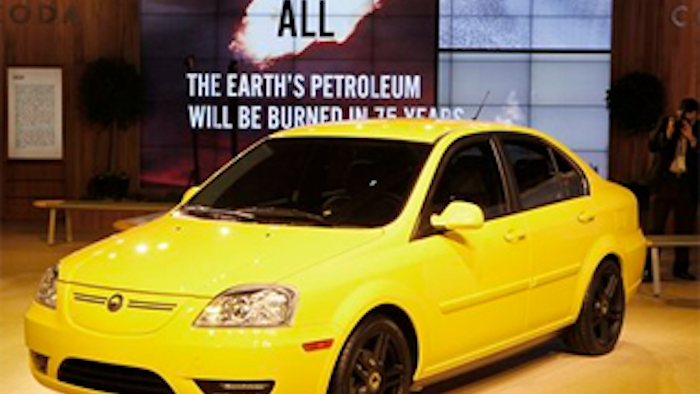 The Los Angeles-based parent of CODA Automotive filed for bankruptcy protection in federal court in Delaware. A consortium of debtors plans to acquire CODA for $25 million, according to a company statement.

The company's statement said it plans to concentrate on CODA Energy, an energy storage business founded two years ago, and exit the automotive business.

The 4-year-old company now has 40 workers. It furloughed around 50 but expects to call them back when the sale is completed.

CODA is the latest casualty in an electric vehicle market that has struggled to lure consumers who are skeptical of the short battery life, high price, and a lack of infrastructure that can require recharging stops of several hours on long trips.

Last month, Anaheim-based Fisker Automotive Inc. confirmed it had laid off about three-fourths of its headquarters workers as it struggles with financial and production problems. Fisker, which makes the $100,000 Karma plug-in hybrid sports car, missed a crucial production target for a half-billion-dollar public loan.

It has sold fewer than 2,000 Karmas, despite early projections of 11,000 sales per year, and it hasn't produced any cars since its battery supplier filed for bankruptcy protection last year.

Buoyed by hundreds of millions of dollars in backing, CODA moved from Santa Monica and opened its 100,000-square-foot (9,290-sq. meter) global headquarters in Los Angeles in the fall of 2011.

Last year, its plant in the Northern California town of Benicia began rolling out its five-passenger sedan. It had a single-charge range of up to 125 miles (200 kilometers). The car's battery, body and most other components were made in China and assembled in California.

Its sticker price of $37,250 — reduced to $27,250 with federal credits and state rebates for electric vehicles — coupled with a lengthy recharge time of six hours and humdrum styling failed to attract buyers.

"In about a decade or so it'll be really ready for the consumer," he said.

Smart producers would concentrate on selling all-electric vehicles to fleet users, like governments or companies, Gott said. Fleet vehicles generally travel established routes and return to garages where they can be recharged overnight.

They don't need to worry about "interrupting the charge in the middle of the night to take the kid to the hospital," Gott said.

China is one of the hopefuls for fleet sales. BYD Co. Ltd., one of the largest manufacturers of rechargeable batteries, announced plans Wednesday to build electric buses and batteries at plants in California's Mojave Desert. BYD, which opened its North American headquarters in Los Angeles in 2010, says the plant will initially turn out 10 electric buses under contract for the city of Long Beach.