As part of a $1 billion round of fundraising by the San Francisco company, the Detroit automaker will invest $500 million to help expand Lyft's current ridesharing services. 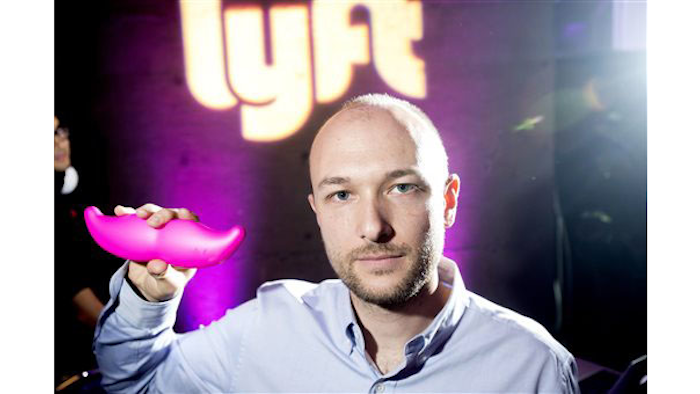 In this Monday, Jan. 26, 2015, file photo, Logan Green, co-founder and chief executive officer of Lyft, displays his company's "glowstache" during a launch event in San Francisco. On Monday, Jan. 4, 2016, General Motors Co. announced it is investing $500 million in ride-sharing company Lyft Inc. GM gets a seat on Lyft’s board as part of the partnership, which could speed the development of on-demand, self-driving cars. (AP Photo/Noah Berger, File)

General Motors and ridesharing company Lyft on Monday announced a new partnership that eventually aims to deploy a fleet of on-demand autonomous vehicles throughout the country.

As part of a $1 billion round of fundraising by the San Francisco company, the Detroit automaker will invest $500 million to help expand Lyft's current ridesharing services.

GM will also immediately become the preferred provider of vehicles for Lyft drivers at selected hubs throughout the U.S., which would enable drivers who don't own vehicles to nonetheless work for Lyft.

In the future, however, the companies hope to roll out self-driving vehicles as part of a ridesharing service.

The agreement bolsters GM's position in the ridesharing market — which is seeing increased activity by conventional automakers — while Lyft would gain an important partner as rival Uber develops its own autonomous vehicles.

The deal will also allow the companies to share GM's OnStar services and Lyft's ridesharing and payment software, while GM will gain a seat on Lyft's board.

“We see the future of personal mobility as connected, seamless and autonomous,” said GM President Dan Ammann. “With GM and Lyft working together, we believe we can successfully implement this vision more rapidly.”

For American companies of all sizes, exporting to international buyers makes more sense now than ever before. The new, "Basic Guide to Exporting" addresses virtually every issue an exporter might face.
Oct 7th, 2021